The morning after he completed his first Boston Marathon, Markelle Taylor was sitting at a boisterous watering hole in the South End trading war stories. He kibitzed with a couple from Australia about the wind during the race. He commiserated with a runner from Oregon who had slipped on a banana peel. Markelle, 46, had finished in 3 hours 3 minutes 52 seconds, a personal best. They were impressed.

“This is the first time I’ve run Boston, but it’s my fifth marathon,” he told them in his slight Southern accent.

He didn’t mention that the first four were at San Quentin State Prison.

Taylor, who has been called the Gazelle of San Quentin, was released only six weeks earlier, after nearly 18 years of incarceration for second-degree murder. Going home after the race meant returning to a metal bunk bed in a re-entry facility in San Francisco. There, the mere act of going through the front door requires taking a Breathalyzer test, removing one’s shoes for a contraband check and passing through a metal detector.

In many ways, he is only half free.

People run for many reasons, but the sport can have a deeper meaning for someone running on the outside after years behind bars. “It helps keep me focused and on the right track, almost like a therapeutic guide,” Taylor said after a recent race. “It re-energizes my heart and mind. The mental and physical aspect is connected to life’s challenges and the different adversities we face. It keeps me humble.” 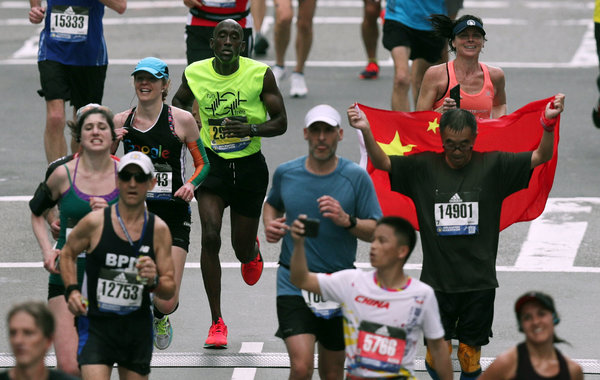 Taylor thinks of his life as a work in progress. He is on parole for at least five years. For now, he lives in a building run by the GEO Group, the private prison corporation. He has to request a pass to attend evening workouts and track meets in Marin County, Calif., organized by his mentor, Frank Ruona, who coaches the 1000 Mile Club at San Quentin, so named because its founder wanted members who attain 1,000 miles during their prison terms.

Taylor has started a $16-an-hour job at Ruona’s former workplace, a construction company, where he loads trucks and maneuvers heavy equipment. The $14.50 round trip bus fare eats into his paycheck. He returns to a room he shares with three other men in which the expansiveness of running is distilled into bags of clothing stored in a plastic bin.

“From the start, Markelle was the fastest runner we had,” said Ruona, who began coaching at the prison in 2005 after he could not find another volunteer. Ruona takes the adage of “being my brother’s keeper” seriously. He has a ringside seat to the criminal justice system, from which he says, “It’s not working very well.”

Taylor is 5-foot-10, lean and muscular. His long, smooth strides, leg speed and efficiency inspired his nickname. Since leaving San Quentin in March, he has been racing nearly every weekend, including in a 10K in San Francisco’s Chinatown less than 24 hours after his release.

Taylor has slowed slightly since he has been “out in society.” There are more demands on his time, so he has recommitted himself to interval training, which involves running 400- and 800-meter segments with limited rest in between. He is planning to run the California International Marathon in December in Sacramento, and he wants to break three hours at the 2020 Boston Marathon. When he finished the race in April, he seemed barely winded.

“Markelle ran a very smart race,” said Diana Fitzpatrick, who has coached Taylor and is a two-time winner of the Dipsea, a tortuous 7.4-mile trail race in Marin County. .

She added, “A 2:45 marathon is within his grasp.” That time would win some small marathons and would have put Taylor in the top 25 in his age group in Boston this year.

Taylor was 27 when he was sentenced to 15 years to life for assaulting his pregnant girlfriend, which led to the premature birth and eventual death of their child. He was addicted to alcohol and had a history of intimate partner violence.

“At the time, I thought I was a man, but I wasn’t,” he said. “I needed help and wanted out and was too much of a coward to walk away. So in my own misery, I went to a place I wasn’t supposed to go.”

He grew up a victim of domestic violence. He was smacked around by a grandfather — “he had big old hands like baseball mitts,” Taylor recalled — and was sexually molested for years by a female relative. His stepfather kicked him, beat him with ironing cords on all fours and forced him to stand in a closet. As a teenager, Taylor spent several years in foster homes. He frequently dedicates his races to his victims and those experiencing hardship, especially his daughter Ebony Princess, 21, who is battling lupus.

A high school track star, Taylor attended junior college, but dropped out. He trained as a certified nurse and worked in the field for seven years. He said he misses the work.

He returned to running after a close friend at San Quentin committed suicide after his fifth denial of parole. “He helped me through my time,” Taylor said. “It kind of hurt me when he gave up like that.”

Taylor vowed to pull himself together and run as an antidote to despair. Eventually the muscle memory came back and his mind cleared.

“Running was a form of freedom,” he explained. “It was my therapy, a way of escaping. It kept me grounded.”

Whatever he may have been like in the past, Taylor now has a warmth that helps him meet people easily, and he has an inquisitive mind. One result of being in a famous prison in a bastion of progressivism is a wealth of outside programs. Taylor performed with the Marin Shakespeare Company and wrote a one-act autobiographical play under its aegis. He reconnected with his faith as a Jehovah’s Witness, a religion inherited from his beloved grandmother, and was baptized in the prison chapel. He enrolled in programs in anger management, domestic violence and substance abuse — classes he is now required to attend on parole.

A retinue of accomplished long-distance runners who volunteer as coaches for San Quentin’s 1000 Mile Club bolstered his efforts.

Dylan Bowman, a professional ultrarunner specializing in distances longer than 26.2 miles, challenged Taylor the most, running shoulder-to-shoulder with him. “Markelle is an incredibly talented athlete,” Bowman said. “We motivated and pushed each other.”

No one, though, loomed larger than Ruona, 73, a former Army officer who has run 78 marathons and 38 ultramarathons and is a revered figure at San Quentin and as the former president of the Tamalpa Runners in Marin County, the group Taylor now runs with. Steady and unflappable, the type of guy you’d like to have around in an earthquake, Ruona has become a guardian angel of sorts for the half-dozen or so 1000 Milers who have been released.

He is aware that running is not a magic potion. One talented 1000-Miler got out and ran the Dipsea six times. Unable to deal with authority and likely abusing drugs or alcohol again, the once-zealous athlete is now sleeping on cardboard boxes on the streets of San Francisco. Ruona has not given up on him, though.

“He’s a lost soul I wish were doing better,” he said.

Boston is the only major marathon in the United States that requires most participants to meet a qualifying time, which is different for different age groups. Taylor earned his Boston qualifying time at San Quentin’s marathon, where he powered through 104½ stultifying quarter-mile loops around the prison’s lower yard, amid scenic vistas, armed guards in towers and razor wire. Races at the prison are frequently interrupted by alarms requiring inmates to drop to the ground.

The prison’s marathon, its 12th, had been postponed twice, first because of smoke from wildfires in the area, and then because of a lockdown after the death of two inmates from drug overdoses. The frequent lockdowns inspired one 1000 Mile Club member to stay in shape by doing hundreds of step-ups onto the edge of the metal urinal in his windowless cell.

To prepare Taylor for Boston after his release, Ruona signed him up for as many races as he could. The Gazelle had not set foot on a hill in more than 18 years, so several Tamalpa runners trained with him on steep terrain.

His trip to Boston was hardly a foregone conclusion: California parolees are prohibited from traveling beyond a 50-mile radius. Various supporters, including a filmmaker working on a documentary about the San Quentin Marathon, lobbied the California Department of Corrections and Rehabilitation for an exception. As luck would have it, Dr. Diana Toche, the under secretary for health care services, who had a say in the matter, turned out to be a runner herself.

Taylor “worked hard, and hard work needs to be recognized,” Dr. Toche said. “It takes a lot of good mental fortitude,” she added. “It takes more than being a gifted runner.”

“I am representing every lifer in California,” he said then as he headed toward the starting line. “I don’t want to let them down.”

The free world, as some lifers call it, can be fraught with peril: It can be difficult to resist the temptation to try to make up for decades of lost time all at once, leading to bad personal and financial decisions.

But Taylor has focused on the life patterns that had made him “a low-self-esteem-plagued mess,” as he put it in his one-act play. “I love myself today,” he said. “Prison saved my life. It made me a better person. A life sentence forces you to wake up.”

Today, Taylor revels in his community of runners, people he finds humble, caring and nonjudgmental and who have welcomed him as one of their own. He recently made his first return to San Quentin as a free citizen, where some teammates asked for his autograph.

At Ruona’s behest, Taylor ran the Dipsea this summer, along with four other 1000 Mile alumni. Nursing a sore calf muscle, he bounded up the 680 slick steps near the beginning of the race before disappearing into the verdant, moist thickets of Mount Tamalpais — the same alluring peak visible in the distance from San Quentin.

After crossing the finish line at Stinson Beach, his feet in the warm sand, Taylor was philosophical about the race. “It was scary, dangerous and beautiful,” he said. “Just how life is.”