A Russian gymnast who taped a ‘Z’ war symbol to his chest while sharing the podium with his Ukrainian rival has been banned from competing for a year.

Ivan Kuliak, 20, wore the symbol – which has come to represent support for Putin’s war on Ukraine – while receiving a bronze medal in the parallel bars at a gymnastics world cup event in Qatar back in March.

The International Gymnastics Federation has now ruled that Kuliak breached multiple codes by wearing the symbol, and will be banned from competing for at least a year.

The ban will last until May 2023 unless rules forbidding the wearing of Russian flags and playing of the anthem – put in place in reaction to the war – are still in place. 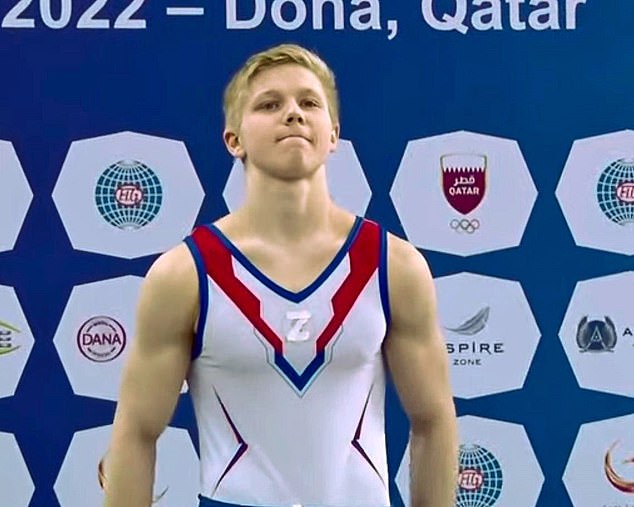 Used by the military, the letter Z distinguishes Russian tanks, troop carriers and other vehicles from similar-looking ones from the Ukraine army in a bid to avoid ‘friendly fire’.

But in Russia, it is a propaganda symbol promoting the brutal invasion of Ukraine.

The letter Z does not exist in the Cyrillic Russian alphabet. Some have interpreted it as standing for ‘Za pobedy’ (for victory), others for ‘Zapad’ (West).

If the restrictions are still in place, then the ban will continue until six months after they are lifted.

Kuliak has also been disqualified from the World Cup, must return his bronze medal, and must repay his prize money of around £400.

He must also pay costs for the investigation, which amount to £1,600.

Valentina Rodionenko, the head of the Russian World Cup delegation, and Igor Kalabushkin, the coach, were not found to have breached the rules and charged against them were dropped.

Days after Kuliak caused the furore, the gymnast said he had no regrets and would do the same again.

He told Russia Today: ‘If there was a second chance and I had a choice whether to go out with the letter “Z” on my chest or not, I would do the same.

‘I saw it on our military and looked at what this symbol means. It turned out to be “for victory” and “for peace”. I just wanted to show my position.

‘As an athlete, I will always fight for victory and play for peace.’ 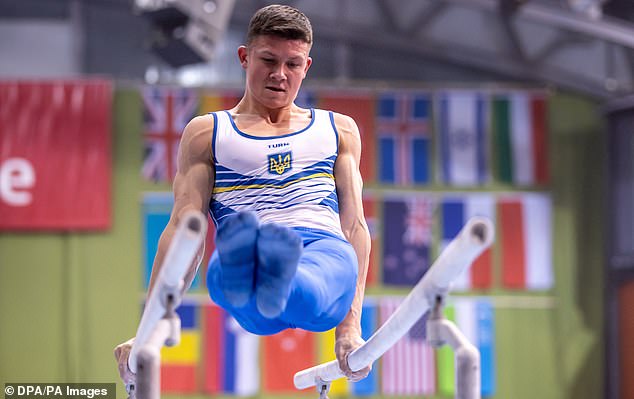 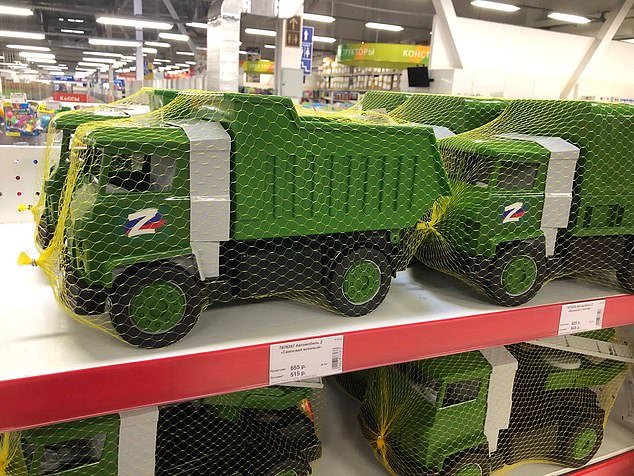 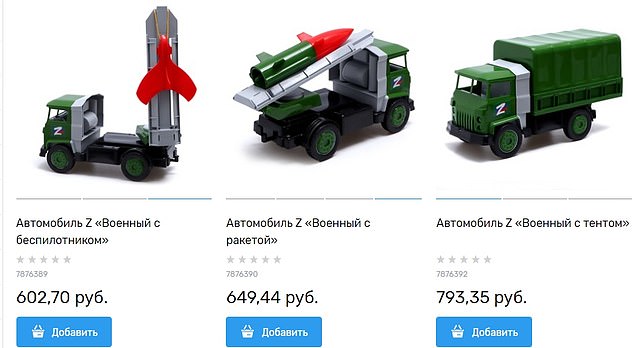 The Z on his shirt was in place of the Russian flag, which has been banned by the International Gymnastics Federation.

The now infamous symbol is being used to drum up support for the war in Russia as part of the Kremlin’s propaganda campaign, with toy replicas of military vehicles featuring the ‘Z’ now on sale.

Pro-Putin celebrities have taken to wearing Z badges, and youth activists have released videos of themselves in Z‑branded T-shirts, screaming: ‘For Russia! For Putin!’

Some pro-Ukrainian commentators have compared Russia’s use of the Z sign to the Nazis use of the swastika during World War II.

Meanwhile, Russia has been accused of double crossing Ukraine as officials moved to pull back on an agreement to free captured troops from the Azovstal steelworks.

Moscow had agreed to exchange hundreds of members of the Azov Regiment – the Ukrainian unit holed up in the Soviet-era steel mill – in a prisoner swap earlier this week. 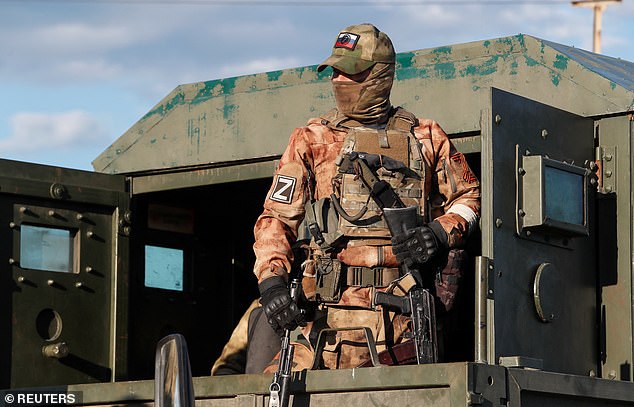 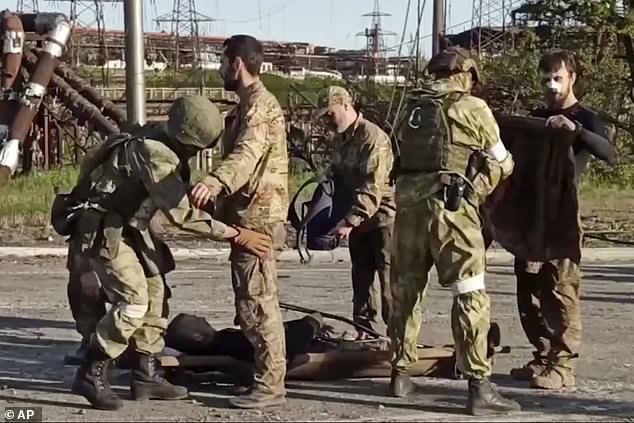 Searched: Russian troops frisk Ukrainian soldiers yesterday as they are evacuated from the Azovstal steelworks (This photo was taken from video released by the Russian Defense Ministry Press Service)

However Russia’s parliament has now announced it will vote on a resolution to ‘prevent the exchange of Nazi war criminals’ today – with some members calling for the Azov troops to be executed.

Ukraine’s deputy defence minister Hanna Malyar dismissed the threats as ‘internal propaganda’, adding that ‘an exchange procedure will take place’ as Kyiv abandons the steelworks after more than 80 days.

But experts have decried the move as ‘underhand’ and claimed it could scupper Ukraine’s bid to free the 600 soldiers – some of whom are still at the plant in Mariupol.

There are at least 250 Azov fighters who were evacuated on Monday, some of whom were seriously wounded.

But all of them remain inside Russian-occupied Ukrainian territory. Vyacheslav Volodin, the chairman of Russia’s parliament, insisted Azov members should be excluded from any prisoner exchange deal.

He added: ‘They are war criminals, and we must do everything to bring them to justice.’

He has ordered the defence and security committees to prepare draft legislation to that effect, according to a post on the Russian parliament’s website.