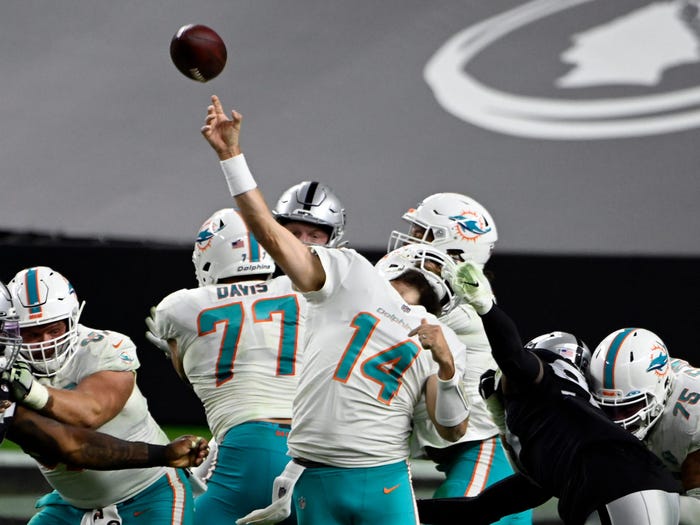 Ryan Fitzpatrick pulled off another miracle on Saturday night for the Miami Dolphins.

After the Dolphins' offense slumped through much of the first three quarters of their game against the Raiders, head coach Brian Flores pulled starting quarterback Tua Tagovailoa in favor of Fitzpatrick, hoping for a spark.

His presence was felt immediately, with Fitzpatrick leading the Dolphins to the Raiders' 4-yard line before settling for a field goal to tie the game. After the Raiders scored on their very next play on an 85-yard bomb to Nelson Agholor, Fitzpatrick needed only three plays to match them again, hitting running back Myles Gaskin in stride for a 59-yard score.

But Fitzpatrick saved his greatest heroics for last. After the Raiders kicked a field goal to take a 25-23 lead with 19 seconds remaining, Fitzpatrick needed to act fast to put the Dolphins in position for a game-winning kick of their own.

Dropping back in the pocket, Fitzpatrick was swarmed by Raiders defenders, one of whom grabbed at his facemask as he threw up a prayer to wide receiver Mack Hollins. Hollins caught the ball, and the Dolphins were given 15 yards on top of the gain due to the penalty, putting them in range of the field goal they needed.

Replays showed just how blind Fitzpatrick was when he put the ball in the air. All things considered, it's the most impressive throw of the 2020 NFL season.

Two plays later, the Dolphins kicked the game-winning field goal to take home the win and move one step closer to securing a spot in the playoffs.

After the game, even Fitzpatrick seemed shocked by the improbable comeback that he had orchestrated.

"The odds are pretty low there of us being able to complete something with the proper yardage," Fitzpatrick said. "I didn't know it was complete. My head was getting ripped off."

Over his 15 seasons crisscrossing the NFL, Fitzpatrick picked up the nickname "FitzMagic" for his ability to pull off the unimaginable. On Saturday night, FitzMagic was in full effect.