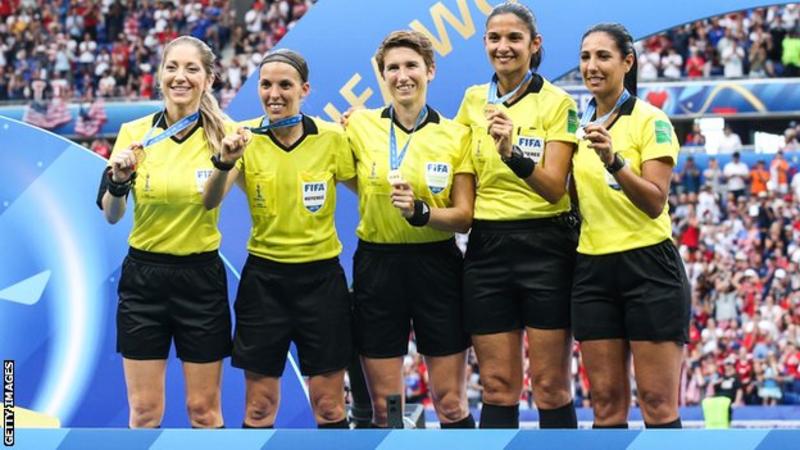 Stephanie Frappart will become the first woman to referee a major men’s European match when she takes charge of the Uefa Super Cup final between Liverpool and Chelsea on 14 August.

Uefa president Aleksander Ceferin said he was “delighted” by her appointment.

“I have said on many occasions that the potential for women’s football has no limits,” he added.

“As an organisation, we place the utmost importance on the development of women’s football in all areas.

“I hope the skill and devotion that Stephanie has shown throughout her career to reach this level will provide inspiration to millions of girls and women around Europe, and show them there should be no barriers in order to reach one’s dream.”

The assistant referees will be Frappart’s compatriot Manuela Nicolosi and Michelle O’Neill of the Republic of Ireland.

Leading male referee Cuneyt Cakir, who took charge of the 2015 Champions League final, will be the fourth official in his home country.

Frappart became the first female referee to take charge of a Ligue 1 match in April, and is in the pool of officials for the top flight of men’s football in France for the 2019-20 season.

In 2014, she was also the first woman to referee a Ligue 2 fixture.

“Stephanie has proved over a number of years that she is one of the best female referees, not just in Europe but across the world,” said Uefa chief refereeing officer Roberto Rosetti.

“She has the ability to officiate on the biggest stage, as she proved at this year’s Women’s World Cup final.”

BBC Sport has launched #ChangeTheGame this summer to showcase female athletes in a way they never have been before. Through more live women’s sport available to watch across the BBC this summer, complemented by our journalism, we are aiming to turn up the volume on women’s sport and alter perceptions. Find out more here.