When the Houston Astros qualified for the postseason last month, their many detractors were annoyed. Then, when they won their wild-card series against the Minnesota Twins, those same critics grew even more agitated.

Now, to paraphrase shortstop Carlos Correa, what will they say?

Behind another strong outing by Correa, the Astros stunned the Oakland Athletics, 11-6, in Game 4 of their American League division series at Dodger Stadium in Los Angeles on Thursday, winning the best-of-five series and qualifying for the American League Championship Series for the fourth straight year.

That made for a happy day in Houston, and also in the Astros’ clubhouse in Los Angeles, where the celebration could be heard during the video interviews with players and their first-year manager, Dusty Baker.

“It’s been a long, tough road,” said Baker, who last reached a league championship series 17 years ago as the manager of the Chicago Cubs. “But we’re halfway there.”

In the rest of the country, where the Astros are considered cheating villains for their sign-stealing scheme during their championship-winning season in 2017, their victory qualified as a reason for dread. After all, most fans had left the Astros for dead when they lost their final three games of the regular season to fall below .500. But the Houston Astros are somehow back among baseball’s final four.

Correa was less strident on Thursday than he was after the Astros beat the Twins, saying that the team’s only motivation was to keep winning.

“It’s a special feeling,” Correa said. “But we’re not done yet. We want to strive for more.”

To do so, Houston will now have to beat the winner of the division series between the Yankees and the Tampa Bay Rays, who will play a decisive Game 5 on Friday night in San Diego.

Correa hit a three-run home run and knocked in five runs on Thursday, Michael Brantley hit two homers and Jose Altuve added a two-run shot for the suddenly slugging Astros. The same team that ranked 19th out of 30 teams with 69 home runs in the regular season, blasted 12 in the four-game series, including three by Correa. In six playoff games, Correa is 10 for 20 with four home runs, 12 runs batted in and a staggering 1.715 on-base-plus-slugging percentage.

During the 60-game regular season, Correa hit just five homers and his O.P.S. was .709, but he noted that the season is only into its third month, and for many players that is when they start to become their most productive.

“We never gave up just because we had a down year offensively,” Correa said. “We kept working.” 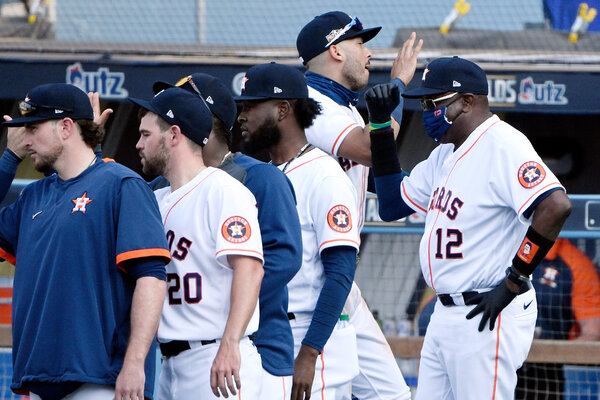 Still, the Astros barely qualified for the playoffs with a 29-31 record, tied for the worst mark among any postseason team. But they have won five of their six games in the playoffs — none of them at home — and look very much like their old selves, marching confidently through October while pounding baseballs over fences. After batting .240 during the regular season, they have hit .281 in the postseason, and .322 in the division series.

When they secured the final out Thursday to send the third-seeded A’s home, they held a muted celebration on the field, as if it were a regular season game. Brantley said that was because of concerns over the coronavirus, but he said they found their celebratory voices later on.

“It’s a little different this year, and we respect that,” Brantley said, and added: “But in the locker room we’re dancing, and we’re enjoying this.”

Perhaps some of the joy is also a cathartic release after what has been a stressful year for Houston. The Astros drew the wrath of opposing players, executives and legions of fans for their sign-stealing caper in 2017, the year they won the World Series. While there had been rumors for years, confirmation of their use of illicit means to steal opposing teams’ signs did not come until Oakland pitcher Mike Fiers, a former Astro, revealed the scheme in an article in The Athletic. At that point, the Astros instantly morphed into everyone’s most hated rival.

Fiers’ accusations were confirmed in January after an investigation by the commissioner’s office, but no current players were punished, which only added to the fury of opposing fans. Then, after Houston beat the Twins a week ago, Correa seemed to taunt his critics.

“I know a lot of people are mad,” he said, and he asked what they would say about the team now. The comments only further enraged Astro-haters, but Correa has backed up his bravado, as have his teammates.

The entire series was played at Dodger Stadium — one of the four locations for the Major League Baseball postseason to minimize travel and try to reduce risk of coronavirus infections — and the warm, dry, daytime conditions were beneficial for the long ball. The teams combined for 24 home runs and hit at least five in all four games.

Fiers was the only pitcher on the A’s roster not to play in the series, and he never faced Houston in 10 games during the regular season, either. The A’s won seven of those games (and the American League West), and were favored to win this series, too, but could not match the Astros’ power.

Baker, 71, took over in January after the Astros fired the former manager A.J. Hinch for his role in the sign-stealing scandal. Baker is still searching for his first World Series championship in 23 years of managing five different teams, having lost to the Angels with the Giants in 2002.

On Thursday, he was asked why the Houston offense was starting to produce in volume, and his response could have answered larger questions about his life and career.

“Better late than never,” he said.