LAKE BUENA VISTA, Fla. — In the early morning hours, before the N.B.A.’s so-called bubble springs to life, Jeff and Stan Van Gundy meet in the lobby of their hotel and head outside for a walk.

They move at a relaxed pace along the cart path at the Waldorf Astoria Golf Club — “We’re both fat,” Jeff said — and fill the time by doing something they do well: yammer away.

“Some days, it’s heavy talk about the future of the world,” Jeff said. “Other times, we’re talking about referees’ calls. We talk about everything and solve nothing.”

When the N.B.A. resumed its season at Walt Disney World in July, much was made of the sacrifices involved. For players, league officials and even broadcasters, it meant saying goodbye to loved ones as everyone settled in for a long grind through the finals. Jimmy Butler of the Miami Heat called it a “business trip.” LeBron James of the Los Angeles Lakers said he missed his children, though he was recently joined by his wife, Savannah. Coaches have complained about being away from their families.

The point being: The bubble can be an isolating place. For the Van Gundy brothers, it has brought them even closer together.

“It’s been the best part about this whole thing,” Stan said.

Jeff, the former coach of the Knicks and Houston Rockets, and Stan, who was most recently with the Detroit Pistons as their coach and president of basketball operations, have been working playoff games as television analysts. Jeff, 58, has been with ESPN and ABC since 2007, while Stan, 61, is in his first season in the booth for TNT and Turner Sports.

They have always been extremely tight — best friends with no other siblings. “The one thing I would say is that I can count on him,” Jeff said. “I guess that’s what everybody is looking for in life.” 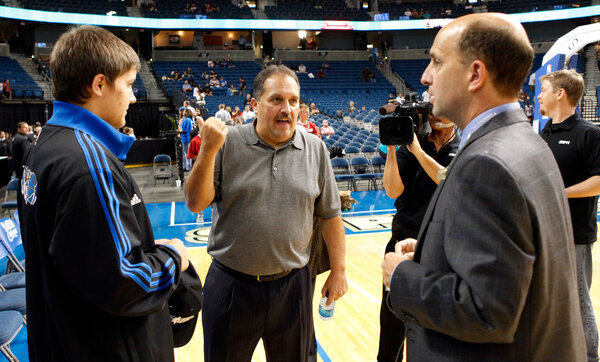 In non-bubble life, they talk on the phone five or six times a week. But back when they were coaching, they were constantly on the road. Even now, their jobs and families keep them busy. Jeff lives in the Houston area, while Stan lives outside of Orlando.

“And because of living in different places, with families and careers and all that, you rarely get that time alone,” Jeff said. “This is by far the most time I’ve spent with him since he graduated from high school, or maybe since I graduated from college. Whatever it’s been, it’s been a long time. So that’s been special.”

Still, their schedules are odd here. Their nights are consumed by basketball. If one of them is working a game, that means the other is back at the hotel, watching his brother on TV. In other words, they have not been able to share many dinners. But they are free most mornings, so they have taken advantage of that window — by walking, slowly.

They are both walkers. At home, Jeff walks on a treadmill — sometimes with a bag of M&M’s, which he knows defeats the purpose. Stan walks with his wife, Kim, and their two dogs. Now the brothers hit the cart path three or four times a week, and Jeff said he had largely resisted the urge to hit the snooze button instead. His brother’s presence, he said, had been a motivating force.

“If I had to do it by myself, I’d most likely roll over and go back to sleep,” Jeff said.

They head out around 6:30 a.m., before dawn, to beat the heat and any golfers with early tee times. It takes them about an hour and 15 minutes to cover the course.

“Jeff walks at a really fast pace,” Stan said, “but he’s slowed down for me. I refuse to be pushed.”

It has been just the two of them — with one exception. Dennis Lindsey, the executive vice president of basketball operations for the Utah Jazz, joined them one morning.

“I kind of invited myself,” Lindsey said in a telephone interview. “Jeff and I were trying to connect over coffee, and it just worked out that they let evil management join them.”

Lindsey, who was in the Rockets’ front office when Jeff was the team’s coach, apparently attacked the golf course at a brisk clip. It was the rare instance when the Van Gundys shared the same airspace and someone else carried the conversation.

“I couldn’t talk because I was breathing so hard,” Jeff said.

Jeff and Stan have both been on the phone from the bubble with their parents, Bill and Cindy, who reside outside of Orlando, a few miles from Stan.

“No one walks more than they do,” Stan said. “Long walks every morning and shorter strolls in the evening.”

The parents have also been watching their sons’ broadcasts. Most of them, anyway.

“With my dad, if it interferes with a Tampa Bay Rays game, it’s 50/50,” Jeff said. “Like, they’ve heard enough of us. They’re also very heavily invested in the Rays winning the division. So I would say, yeah, they’ll watch, but not at the expense of Rays baseball.”

Jeff did learn from a recent conversation with his parents that his mother had been valedictorian of her high school class — a piece of trivia that was news to him. He discussed it at length with his brother on one of their walks. Their conversations meander. They talk about basketball, their families and politics.

“His knowledge of politics far surpasses mine,” Jeff said. “He studies it, and I think he puts a lot into it before he forms an opinion, which I appreciate.”

By his own estimation, Stan tends to talk more on their walks than his brother does, and perhaps that has something to do with his being the older sibling.

“But it’s fairly equal,” Stan said. “It’s not like he doesn’t have anything to say.”

In the bubble, the days tend to blend together — “I don’t even know what I ate last night,” Jeff said — and Stan said last week that he was preparing to head home at the conclusion of the conference semifinals. (Another broadcast team is working the Western conference finals for TNT.) “I don’t have much time left here,” Stan said.

He was glad that he made it count.