JACKSON HOLE, Wyo. — Kai Jones, who at 14 is already a professional adventure skier with the videos to prove it, likes to reminisce about the old days.

Like, when he was an 11-year-old sixth grader. His goal then, aside from seventh grade, was preparing for his first leap off a menacing, craggy, 35-foot mountain cliff in Wyoming backcountry known as “Smart Bastard.”

“I had butterflies in my stomach — looking over the edge was intimidating,” Kai said last month, still in ski boots following a lightning dash down the slopes of the Jackson Hole resort near his home. “But you close your eyes and envision the approach you’ve planned. You open your eyes and hope for the best, but you know it’s going to work out because you’ve put in the time to study it.”

Airborne for three seconds, Kai nailed the jump, landing in a splash of snow that temporarily enveloped his four-foot-plus frame. As cameras rolled, he emerged from the powdery plume to carve deft, buttery turns in the ultra-steep landscape beneath the famed rocky precipice.

Sliding to a stop, he called his mother, Shelly.

“I congratulated him,” Shelly Jones said later. “I wasn’t going to say, ‘Oh my God, you shouldn’t be doing that.’ We’re a ski family.”

The footage was turned into Kai’s action movie debut, which found its way to YouTube, quickly attracting more than three million views. A winter sports prodigy — undaunted in expanses of perilous out-of-bounds terrain — was born. 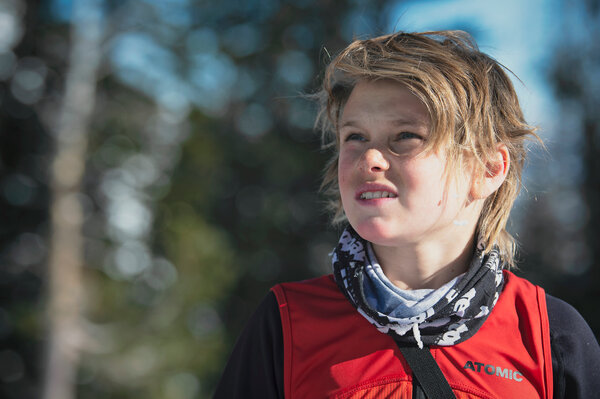 A few months later Kai, who began skiing when he was 2, won the International Freeskiers Association’s North American championship for skiers younger than 12. As sponsorship deals with Red Bull and Atomic skis rolled in, Kai turned pro, becoming a preteen celebrity who routinely stops for autographs and rubs elbows with adults in the pantheon of big mountain ski personalities — even though he still plays with Legos.

“Being famous is cool, for sure,” Kai said with a laugh last month, sitting on a high-back barstool chair that left his feet dangling well above the floor. “But you have to be humble and a good mentor.”

Kai’s incandescent career arc in the ski community, while atypical, is nonetheless familiar.

Time and technology have quickened the pace exponentially. Since at least the 1970s, pro adventure skiers and snowboarders have earned their renown and made their money by performing in visual media. But the films that featured their derring-do and mesmeric skills were produced only a few times a year. That meant it could take years to develop a marquee name or lasting status in a world that prizes near-vertical, high-speed descents through or above snow-covered couloirs and fearsome stony bluffs.

Moreover, film production was costly, with temperamental cameras and clunky equipment that had to be dragged up windswept mountains.

The evolution of the genre, however, has benefited significantly from the use of drones, sophisticated video techniques and the immediacy of social media.

Kai can be captured vaulting off the sheer face of a boulder outcropping as he executes a double back-flip — one of his specialties — just after the sun comes up, and by noon have his 45,000 Instagram followers forwarding the clip around the world.

“The internet has changed everything, maybe because it’s now kids inspiring kids,” said Todd Jones, Kai’s father. “And the training capabilities for them are so much more advanced — they’ve spent years trying out their moves over airbags, foam pits and trampolines. No more waiting for it to snow in the backyard.”

Todd Jones is well positioned to assess the generational changes, with a foot planted in eras past and present. A former pro skier, he co-founded Teton Gravity Research in 1995, and it blossomed into an action-sports culture powerhouse that has produced nearly 60 films.

Kai, the older of the Joneses’ two sons, was bred to take a prominent role in the family business. As a 7-year-old, he was slicing impressive lines in the snow as he accompanied his father on desolate, breathtaking shoots around North America. Not surprisingly, as Kai’s renown grew, he became familiar with the insinuation that his accomplishments had been built on the back of his father’s influential snow sports enterprise.

“I’ve had friends say: ‘You only have what you have because of your dad,’” he said. “I credit my dad with everything and he gave me this door to walk through, but I also worked my butt off every single day. I get up before the sun rises to head to the mountain, and I train year-round. I’ve probably done 5,000 back flips.

“These days, that conversation has ended because I’m skiing lines that pros are skiing and doing the same tricks as them.”

Seated next to his son, Todd Jones smiled as he said: “Of course I’ve helped his trajectory. But the kid has put in the work. The proof is in the pudding.”

The Joneses are also used to addressing a more obvious topic: Isn’t such out-of-bounds skiing, with soaring jumps off mammoth cliffs, just a bit dangerous?

Especially since Kai freely admits: “I crash a lot.” (He also concedes, “I always say to myself, ‘How far can I push it and not make my mom scared?’”)

Shelly Jones, who started skiing when she was 10, was philosophical about the risk.

“Of course, any mom seeing their child going off a cliff is going to be little nervous,” she said. “But there’s a lot of prep that goes into it first — way before anything happens. We really are safety conscious and that’s been ingrained in Kai’s head.”

Still, when Kai was 8, he propped a ladder against a garage door so he could climb onto the roof of the family home in Victor, Idaho, which is across the Teton Pass from Wyoming. Kai then skied off the house. Shelly was impressed when her son successfully landed on an icy snow drift outside her window.

“He was never afraid to catch air,” she said.

Todd Jones, noting that strict safety procedures have been an overriding part of his company’s protocols for 25 years, also insisted on perspective. He said that a single film might represent an entire winter of footage from the mountain, because many days and weeks are deemed too hazardous for a variety of reasons, including the stability of the snowpack in a region prone to avalanches.

“We take as much pride in walking away and not doing anything that day as we do from achieving things,” Todd said.

Kai has had a few serious injuries, all of them unrelated to skiing, and some of them more likely associated with being 14. He broke his foot doing a back flip off a pool table. “In front of a girl,” Todd said.

Kai broke the same foot and some ribs while mountain biking, another of his competitive sports.

“I’m really bad at just sitting around,” he said.

The next steps for Kai are less certain. He is a high school freshman enrolled in the Picabo Street Academy, a private school based in Utah and named for the Olympic skiing champion. The academy has a flexible, virtual educational model that is attractive to high-profile youth athletes and other students with demanding extracurricular pursuits.

Although the sport of freeriding or freeskiing — which means skiing or snowboarding on ungroomed, usually off-piste terrain without a set course — is not currently included in the Winter Olympics, Kai has other interests and options, like college film study programs.

Todd Jones joked that everything his son had done so far might be just a ploy “to build a really rad college résumé.” Todd added: “He does need a backup plan. You can’t be a pro skier forever.”

Kai said he had no set goals for the distant future. In one breath, he said he could quit skiing in three years if it is no longer fun. An instant later, he suggested that he wanted to be ranked with the legends of the sport, like Tanner Hall, an American who as a 17-year-old won a freestyle skiing gold medal at the 2001 Winter X Games and then won six more golds by 2008. Simultaneously, Hall began a celebrated film and endorsement career.

Reached in his native Montana last week, Hall, now 37, said he knew all about Kai Jones’s exploits, which he called “refreshing,” even as he wondered if there might be much more pressure on his youthful successors.

“With all the social media and how many eyes you’ve got on you, it’s going to be a whole lot harder,” Hall said. “Our generation was more of a party generation, and you can’t do that anymore. I’d win a competition and then spend 10 percent of my earnings on drinks that night.

“I was the kid who said skiing wasn’t a business,’’ he added. “Well, you know what? It is, but you have to be a good role model and good to yourself and good to other people. With the team that Kai has behind him, he has the upper hand. He just has to stay focused.”

On a recent walk through the busy village at Jackson Hole, where the gaggle of A-listers can include the Kardashians and Justin Bieber, Kai Jones was repeatedly stopped by children roughly half his age who wanted to pose for pictures with him. Others wanted him to sign their ski helmets, while their mothers and fathers waited for selfies as well, even though they would tower over the photo’s centerpiece.

Kai, appearing both accustomed to the attention and heedful of it, tended to end each exchange with a playful laugh and the same message: “Have fun, OK?”