Tim Tszyu no longer needs to defend himself against accusations he's trading off his famous last name. Royal boxing blood from father Kostya courses through his veins, but this was a night that he alone owned as he dominated a hapless Jeff Horn to establish himself as a global player in the super welterweight division.

Before the fight, the 25-year-old had been installed as favourite but there were so many questions that needed to be answered: was it too much, too soon? Could he step up in class so quickly? Was he tough enough to get in the trenches with a brute like Horn and make it out in one piece? 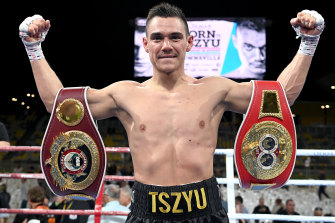 Now the only question is how far can he go in the sport. He was in complete control from the opening bell against the former welterweight champion, who later confessed to having been made to feel "silly" as he charged around clumsily for eight damaging rounds before it was mercifully stopped before the ninth.

There should be some measure of restraint given Horn has been on a gradual slide and looks a shadow of the rough and tumble welterweight monster that threw Manny Pacquiao around Suncorp Stadium. Yet it's also fair to say that Tszyu's performance just oozed class and surpassed almost everyone's expectations, perhaps even his own.

Talk shifted quickly to opportunities to fight for a world title but, at 25, he should be in no hurry. For now, Tszyu can be satisfied for having put down the kind of performance that established him as an elite fighter in his own right, not the son of a legend who was given a rails run to opportunities others felt they deserved first.

"People will always compare me to my dad and what he did was truly out of this world. He was an undisputed world champion for 10 years," Tszyu said.

"For someone to do that is beyond crazy. I will always float around as the son of Kostya, but I wanted to say this is Tim Tszyu who beat Jeff Horn and it wasn't the son, it wasn't because of my last name. It was purely the fact I trained hard and got the victory.

"Hopefully I introduced myself with that performance."

Tszyu was so fit and strong he looked like he could have beat up Horn for another eight rounds before showing any signs of fatigue. Horn had felt his strength and experience would go a long way to winning the fight but Tszyu never let him in once, dominating every round, dropping him in the third and sixth and finally winning after the eighth. 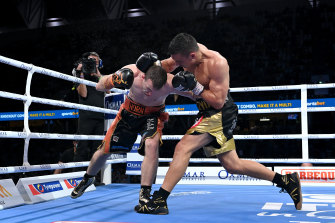 Tim Tszyu, right, dominated Jeff Horn in every round to win the fight.Credit:Getty Images

"Straight from round one, once he got tired I felt he was going downhill. I knocked him down twice, my fitness was on another level and I felt it," Tszyu said.

"What won in this fight was of course my physicality and strength, it wasn't my boxing skills, it was my fitness and how conditioned I was and that was because of the prep I did. If you put in the work, you get results."

Tszyu's promoter Matt Rose said the fight showed Tszyu was now the premier Australian fighter and the world was just put on notice. The fight was beamed into the US on ESPN and Rose can expect his phone to be ringing in the aftermath.

"He is the new face of Australian boxing and he is our next superstar. You beat a guy like Jeff Horn who is an absolute warrior. We are talking about a guy who has beaten Manny Pacquaio," Rose said.

"You saw the Jeff Horn that turned up, he was ready to fight and we know where Tim Tszyu stands in Australia, but look out the world, he is coming."

Horn was gracious and respectful in defeat and there will be some scrutiny of the stoppage, with his trainer Glenn Rushton saying he and Jeff's brother Ben were thinking of giving him a minute in the ninth to find a miracle punch before a consensus call from the corner, in conjunction with referee Phil Austin, put a stop to the pounding.

Jeff Fenech, who is a long-time critic of Rushton, would lash the trainer for even contemplating fighting on but Rushton said he had no intention of letting Horn get hurt.

"We told Jeff 'You have to show us something'. Jeff was saying 'I want to keep going'. Ben (Horn) and I were saying to give him one minute in round nine to see if he can land a big shot," Rushton said.

"Phil just came over and called it and said he wanted to stop the fight. If I had been in Phil's position, I would have been very close to calling it. I have no qualms about the referee's decision."

For Horn, the call was met with relief. With the fight extremely lopsided, there was no need for him to go out on a stretcher instead of his shield.

"The first thing that goes through your head was relief. I'm never going to throw in the towel, never going to say I've had enough. It was more of a relief than anything, that the referee was saying he'd seen enough. I was like, 'Alright'," Horn said.

He will go home to wife Jo and his two daughters and decide his next move but he should retire. He has nothing left to prove and has provided a wonderful boost for the sport with his win over Pacquiao. He and Tszyu would not have been fighting in a stadium if that hadn't transpired.

Rushton said he would back any decision Horn made while his promoter Dean Lonergan was more forthright. The ride had been incredible, he said, but it should now come to an end.

"Right now, if Jeff was going to ask me what should I do now, I'd say 'Mate, you've made a lot of money out of this sport, had a hell of a ride, achieved everything you wanted to achieve, now it's time to look after your family and look after your health'," Lonergan said.

"My ambitions for Jeff Horn were to go out healthy and wealthy and right now I think he can achieve both those things. He's going to have his dad and wife have a serious chat to him and they can look in the mirror and say 'We had a hell of a ride'."