The Tyrone-Kerry saga continues to rumble on, with speculation surrounding the Ulster champions’ ability to field a team on the rescheduled date of Saturday August 21.

Tyrone GAA chair Michael Kerr and the team’s joint-manager Brian Dooher have both said the Red Hands will struggle to fulfil the revised fixture.

So is a request to move it back one more week reasonable?

“I think it is, and I think it was something that probably should have been looked at a bit further before there was any announcement made,” former Kerry star Kieran Donaghy said on Inside The Game.

“I don’t think it should affect Kerry’s preparations too much, now that they know in advance that the game is going to be changed. But I think what would affect them more is if there was going to be another change in a few days’ time again. The sequence of training leading up to big championship games is done with the highest degree, there’s huge analytics which goes into it. It’s about having guys right for the big game.

“So I would say Kerry will be fine with whatever, we just need Tyrone right for this game. How can Brian Dooher and Feargal Logan pick a team if they don’t have 10 or 12 guys on the pitch next week? It’s a very tough situation that they are in.” Donaghy added should it be postponed once more, the fortnight build-up to the All-Ireland final should remain.

“The big thing for the winners of this game, be it Kerry or Tyrone, to be fair to both counties is that they have a fair crack at the final. It’s essential that’s knocked back as well for both teams, because you are going to need to get right and get ready for that game, and analyse whether it’s Mayo or Dublin sitting in the final to get ready for,” he outlined.

“We have said it all year, for the back door to be allowed in the football, because we always felt there probably was a week or two to be pushed out. If that’s possible on the calendar, it’s very possible that it may be done.” 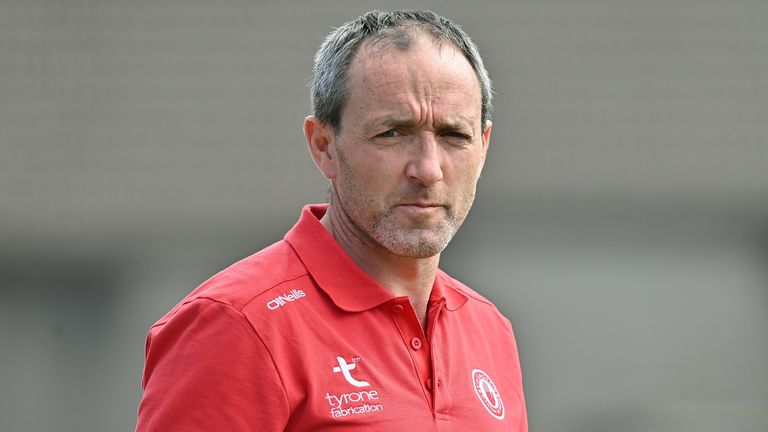 Canavan: Give Tyrone another week

Peter Canavan says the Red Hands will need another week.

“I think there is only one resolution to it, and that is to put it back another week,” he said.

“Even at that, there is still no guarantee that Tyrone will be fit to play. But at least it gives Tyrone a better chance to fulfil the fixture.

“Croke Park have access to all the hard facts, regarding who was positive, when they were positive. They know when everybody was tested. So the hard facts are there, they have them. And I’m sure if Kerry wanted to check that out, it’s there for them.

“Why not put it back another week? After this weekend, there’s only three counties that’s left. So regarding the club fixtures put back, I know in Tyrone we would gladly put back the championship a week or two to allow our players the chance to represent the county in an All-Ireland semi-final. I would like to think there would be no problems in that regard from Kerry, Mayo or Dublin either.”

Watch the full discussion on Inside The Game at 8:30pm Wednesday on Sky Sports Arena.