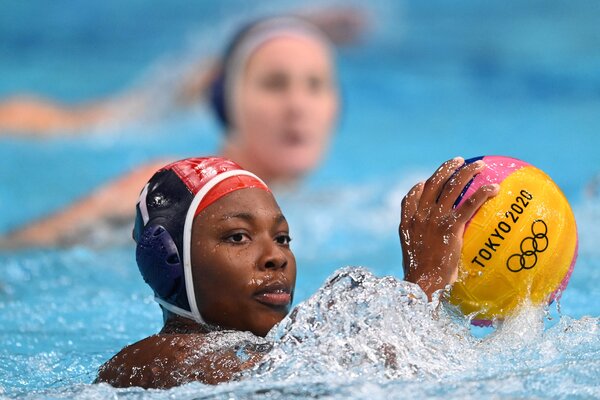 The United States took a 6-1 lead, and after a brief Spain flurry, led by 7-4 at the half. But Spain failed to score at all in the third quarter, and the game was essentially over.

Maddie Musselman led the balanced scoring attack with three goals. There was also a goal for Maggie Steffens, the captain and for years the best player in the women’s game, who along with Melissa Seidemann captured her third gold.

The United States played lockdown defense, getting bodies in front of many of Spain’s shots before they even reached the goal. Ashleigh Johnson, widely considered the world’s best goalkeeper, played nearly all of the game and saved 11 of the 15 shots that reached her.

“Her presence, you can feel it, even when you’re on offense,” Musselman said of Johnson. “You hear her voice everywhere you are.”

The path to the title was not as easy as expected.

Coming into the Tokyo Olympics, the U.S. team looked close to unstoppable: Between the 2016 and 2020 Games, it amassed a record of 128-3. Spain was also the Americans’ opponent in the last two world championship finals. The United States won those games, 11-6 and 13-6.

But the Americans suffered an unexpected group play loss to the eventual bronze medalists, Hungary, 10-9. The team shot just 29 percent that day; in the final, that figure was a more characteristic 54 percent.

The team had expressed concern going into the Olympics, since the pandemic had limited its games against top opposition.

Coach Adam Krikorian said before the Games that it was “tough when you’re just competing against each other,” and that he sometimes had trouble motivating the players: “We’ve had so much success, and it’s natural for us to relax a little bit.”

If the players relaxed a bit against Hungary, it was out of their systems for the final, which looked like the kind of romps followers of the team have been seeing for years.