The biggest disgrace in sport?

Bigger even than Greg Norman?

Listen, I am going to go with Qatar. Not long ago, The Guardian revealed that no fewer than 6500 migrant workers – from places like India, Pakistan, Nepal, Bangladesh and Sri Lanka – have reportedly died during stadium preparations for this year’s FIFA World Cup. Yup, I know. STAGGERING! That is twelve migrant workers a week losing their lives in appalling conditions, since Qatar was announced as the winner of the 2022 bid. By way of comparison, in terms of building infrastructure, while 16 workers were killed in the building of the Sydney Harbour Bridge, just one was killed, off-site, during the construction of the Opera House, and no workers at all were killed building facilities for the Sydney 2000 Games. But Qatar had 6500 killed? 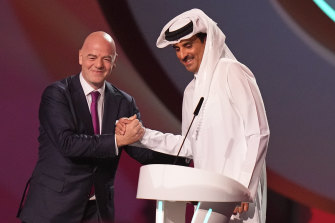 And still that is not the most shocking thing. For wait till you hear the remarks of FIFA president Gianni Infantino when he was asked in LA on Monday evening if FIFA would take some of their massive profits from the World Cup to, you know, to help families of workers who died in Qatar. The appropriate response would have been “YES, and we are disgusted – DISGUSTED – at the callous disregard that Qatar has demonstrated for worker safety. Six-and-a-half thousand killed is on their heads and our heads for the rest of time. We could have used our influence to insist on better conditions, but that many dead says we comprehensively failed. I tender my resignation accordingly.”

Instead, Infantino made appallingly dismissive remarks that boiled down to: actually the workers were lucky to work on such a project and even the dead ones can be proud.

“When you give work to somebody,” he said, “even in hard conditions, you give him dignity and pride. It’s not charity. You don’t make charity. You don’t give something to somebody and say, ‘Stay where you are. I give you something and I feel good’. Now 6000 might have died in other works and so on. And of course, FIFA is not the police of the world or responsible for everything that happens around the world.”

Is he insane? Six-and-a-half thousand bereaved families and he not only doesn’t offer compensation, but talks of their “dignity and pride”? And no, you’re not the police. But do you think when handing Qatar the bid, it could have said on the front page of the contract, this will be null and void if you are not seen to look after the workers building your stadiums. Instead, you clearly just don’t care. Let us call it for what it is. The biggest disgrace in sport.

Let that go through to the ’keeper

I thought that name sounded familiar! In the world of sport Kylea Tink was known as the inaugural head of the McGrath Foundation. These days she is running as one of the “teal independents” giving things a shake in North Sydney. Anyhoo, because I live in the area, a mate told me a sporting yarn about her, that I have been able to confirm the veracity of with the woman herself.

See, back in January 2009, in the early days of the Foundation, during the first-ever Sydney Pink Test, Ms Tink had been out on the SCG pitch doing a live cross with Shane Warne and Glenn McGrath, talking up the Foundation and the need to raise funds for breast cancer research and care, in honour of the late Jane McGrath. 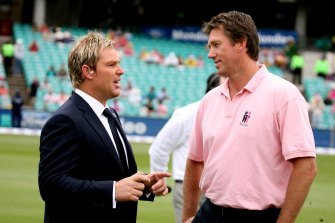 Shane Warne and Glenn McGrath at the SCG for the Pink Test.Credit:Ben Rushton

“The three of us were walking side by side,” Ms Tink told me on Friday, “Warney on one side of Glenn. Me on the other. As I was managing all the comms I’d lent in front of Glenn to ask if the crew were happy with how it had went and if they’d likely want to do it again. Warney responded: ‘Definitely’. I then asked, ‘Well how will I know where you need Glenn, and when?’

“That’s when Warney said, ‘Well if you just give me your number I’ll text you’.”

You’re way ahead of us, yes? Could see it coming? Well so could Glenn McGrath at the time.

“At that point Glenn stopped walking, looked at Warney, looked at me. Turned back to Warney and said quietly, ‘That’s not a good idea mate. You can text me.’ Then Glenn walked on. It was a very funny moment and I never did give my mobile number to Shane.”

It’s par for the course, Jerry

I’ve been doing this column for pushing towards 30 years, and this is the first time I can recall the following has come up as a sporting discussion point. See, after finishing third in the Palos Verdes Championship, Kiwi golfer Lydia Ko was asked by Golf Channel’s Jerry Foltz whether the tightness in her back and hips would be a recurring problem?

“I hope not,” she replied frankly. “It’s that time of the month.”

Jerry freezes. Did she just say that? Yes, and she’s not backing off.

“I know the ladies watching are probably like, ‘Yeah, I got you’. So, when that happens, my back gets really tight, and I’m all twisted … So, yeah, there you go.”

Jerry stands there, speechless, not sure which way to look. There is an awkward pause, finally filled by a laughing Ko.

“I know you’re at a loss for words, Jerry. Honesty it is.”

Tough news on the spinal injury in rugby front. A fortnight ago, Andrew Regan, was playing for his beloved Orange Emus when the injury occurred. Treated on the field, he was priority airlifted to Royal North Shore Hospital and operated on that very night, in a procedure which lasted eight hours. He has sustained significant damage to his C4 and C5 vertebrae, leaving him an incomplete quadriplegic, paralysed from the chest down.

A loving father to 11-month-old Gus and husband to Jessie, a GoFundMe donation page has been established. The rugby community is rallying. Meanwhile, the former back for the Cronulla Sharks, Nathan Stapleton, has also fractured his neck and sustained a spinal cord injury while playing for Boorowa on April 9. He too, is a family man and paralysed from the shoulders down. His GoFundMe is here.

Novak Djokovic on Russian/Belarusian players being banned from Wimbledon vs him being banned for being a COVID-19 lunatic: “It’s not the same thing, but going through something similar earlier this year for myself, it’s frustrating knowing that you’re not able to play.” Diddums.

Newcastle Knights coach Adam O’Brien after they lost 50-2 to the Storm: “People are going to think I’m off my head if they look at the scoreline and think that there was [improvement] but there was some response.” Adam, you’re off your head. I watched. The problem was not technique, or strength. It was heart.

Super soccer agent Mino Raiola: “Current health status for the ones wondering: pissed off second time in 4 months they kill me. Seem also able to resuscitate.” A few days later he actually died. Reports of his death, were not actually that greatly exaggerated.

Jonathan Laidlaw, Boris Becker’s lawyer after his client was found guilty of hiding assets from his creditors, after declaring bankruptcy: “His reputation, an essential part of the brand, which gives him work, is in tatters. His fall is not simply a fall from grace and amounts to the most public of humiliations.”

Judge Deborah Taylor sending Boris Becker to the Big House with a sentence of two and a half years: “It is notable you have not shown remorse or acceptance of your guilt. While I accept the humiliation you have felt as a result of these proceedings, you have shown no humility.”

Waratahs coach Darren Coleman after beating the Crusaders didn’t want to waste time with the press: “Let’s do this fast boys, I’ve got a lot of beer to drink.”

John Coates from an obscure interview back in 2008, matter-of-factly reveals the money that went to securing key votes from the Ugandan and Kenyan IOC members: “I just went over and said to them, ‘Look if, you know, if you vote for us and we get up, then there’s US$50,000 for each of your two National Olympic Committees, 10 a year for the next five years or whatever, you tell them it’s to be spent on sporting purposes. That subsequently, and I was quite open about it, it was all audited … There was an inquiry into all of that and so it’s suggested we bought the Games. Well to a large extent we did …”

Lawyers acting for Coates advised: “We are instructed that the IOC publicly confirmed that Mr Coates had not breached its rules at the time.”

Football Australia boss James Johnson on the NSW government always kowtowing to rugby league: “At the end of the day, it is the hard-earned money of taxpayers across NSW which is at stake here and, as the representative body of the largest club-based participation sport in the country, we think it’s a bit much for one sport to think it can lay claim to this. The NSW government is the government for all communities in this state, not just a portion of it.”

NSW Premier Dominic Perrottet on stadium wars: “Now Peter [V’landys, ARLC chairman] wants an announcement yesterday, he wants a little bit of theatre and wants to be on the TV, that’s great, but what I’m interested in is getting the outcome.” The outcome, Premier, is that the NRL once again gets everything it wants and the rest of the sports, particularly community sports, get three-fifths of bugger-all.

Gwyneth Anne Thayer, who has written a history of greyhound racing on the decline of greyhound racing in the States: “Do I think the industry is dying? Yes. It’s happening way faster than I thought it would.” Only in places with backward governments is that not the case. (See NSW.)

Tasmania JackJumpers coach Scott Roth on his team making the NBL grand final in their foundation year: “I don’t know what to say other than we continue to defend the island and make the state proud.”

Team of the Week

Stephen Fry. Named as the next president of Marylebone Cricket Club.

Tasmania JackJumpers. In the NBL grand ginal in their first season and play the Sydney Kings led by MVP Jaylen Adams.

Boris Becker. Will be getting a zebra sun-tan for at least the next eighteen months non-parole, after being found guilty by a British court for hiding hundreds of thousands of dollars worth of assets after declaring bankruptcy. Falls from grace for sporting icons rarely come rougher.

Ange Postecoglou. On the verge of leading Celtic to the league title which would give him league titles in Scotland, Australia and Japan.

Waratahs. Up to sixth on the table with a fabulous win over the Crusaders at Leichhardt Oval, led by fly-half Tane Edmed, son of famous Balmain Tiger Steve Edmed.

Daniel Faalele. Australian drafted by the Baltimore Ravens could be the heaviest player in the NFL. He currently tips the scales at 174 kilograms.