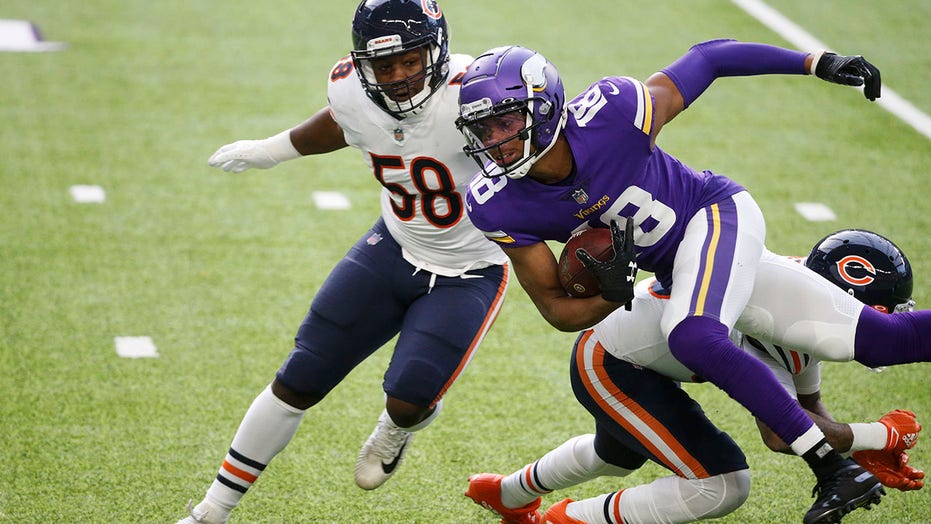 Minnesota Vikings rookie wide receiver Justin Jefferson attempted to clear the air Sunday after he was caught on a hot mic cussing at his quarterback Kirk Cousins.

The moment came with the Vikings trailing the Chicago Bears, 20-7, late in the second quarter. Cousins dropped back to pass and felt the rush of the Bears’ defense. He tried to hit Jefferson in the back of the end zone but overthrew him.

Jefferson could be heard yelling in the empty U.S. Bank Stadium, "F—k, Kirk!"

The former LSU standout wanted to make sure that he wasn’t being looked at as a diva wide receiver as his in-game emotions got the best of him at that time.

"y’all love blowing stuff out off proportion. And I ain’t no diva don’t get it twisted," he wrote.

Jefferson has blossomed into one of the Vikings’ top wide receivers this season and is among the favorites to win the NFL’s Offensive Rookie of the Year.

He has 73 catches for 1,182 yards and seven touchdowns in his first season as a pro football player.

The Vikings have not had a great season. Minnesota is 6-8 this season and are in slight contention still for an NFC playoff spot, though their chances are slipping away.

Celebrities
Anne Hegerty discusses her taste in men on Loose WomenAnne Hegerty, 62, revealed she was "mobbed" when she visited Middlesbrough....
Lifestyle
As the supply of COVID-19 vaccines expands across the country, officials and advocates overseeing the rollout to Americans experiencing homelessness...
TV & Movies
The report arrives a week after Sarah Jessica Parker confirmed that a revival of the fan-favorite show was in the...
World News
FBI agents are searching for US Capitol rioters who viciously beat a cop while chanting "kill him with his own...
Beauty
Our team is dedicated to finding and telling you more about the products and deals we love. If you love...
Fashion
GalleriesCollection Raving in a snowstorm: Such an exciting 1990’s-inspired dream. To present his latest men’s collection, Massimo Giorgetti took over...
Recent Posts
We and our partners use cookies on this site to improve our service, perform analytics, personalize advertising, measure advertising performance, and remember website preferences.Ok