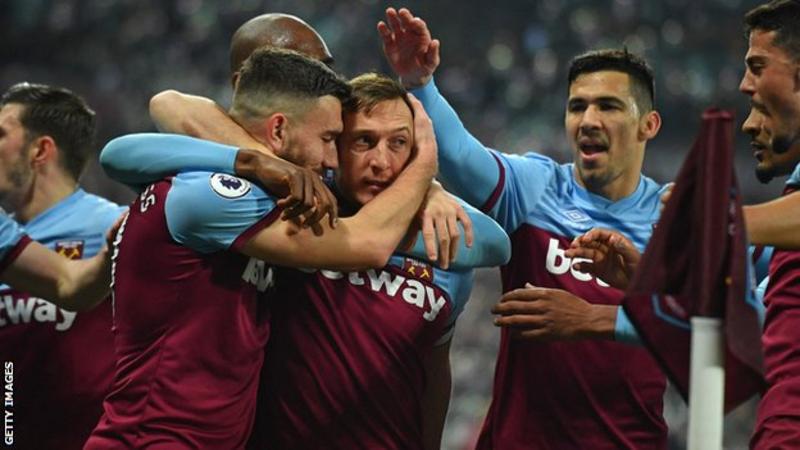 David Moyes’ West Ham return got off to the best possible start as two Mark Noble goals helped his side to an emphatic victory over Bournemouth that lifted them out of the relegation zone.

Captain Noble opened the scoring inside 20 minutes with the help of a deflection before Sebastien Haller’s bicycle kick doubled the Hammers’ lead.

Noble scored his second 10 minutes later from the penalty spot after being brought down by Harry Wilson, before Felipe Anderson rounded off their biggest Premier League win for over a decade.

West Ham were lucky not to end the match with 10 men after Aaron Cresswell was sent off for a reckless challenge on Ryan Fraser, only for the video assistant referee (VAR) to downgrade the dismissal to a yellow card.

Victory was West Ham’s second in six matches, while the defeat sees Bournemouth slip into the relegation places in 18th.

Moyes replaced the sacked Manuel Pellegrini on Sunday, returning to the club he led to Premier League safety at the end of the 2017-18 season.

In his first spell at the Hammers’ helm, Moyes lost his opening match in charge – away to Watford – and had to wait four games before finally getting a win on the board.

But it was the polar opposite second time around, a classy performance from the Hammers securing a statement win on home soil.

Moyes stamped his return by making four changes to the side which had lost to Leicester on 28 December under Pellegrini, and those changes proved pivotal with Noble and Robert Snodgrass the stars of the show from the off.

Noble had called for West Ham fans to get behind Moyes after his reappointment and the captain led from the front with his opening goal, wrong-footing Aaron Ramsdale with his deflected strike after brilliant play from Snodgrass.

The scorer geed up the crowd as the match got back under way, signalling to them to ramp up the volume, and they did exactly that when Haller found the back of the net seven minutes later, through an exquisite mid-air finish from Ryan Fredericks’ cross.

It marked the first time the Hammers had scored twice in a first half this season and Bournemouth had no answer as their hosts repeatedly thundered forwards, with Noble soon scoring his second after being tripped in the box by Wilson, sending Ramsdale the wrong way with his spot-kick.

West Ham did not quite have the same control of the second half as they did the first as the Cherries looked to claw something back, but if the three points had not already been sealed by now, Anderson’s second-half strike proved the final nail in the coffin.

The Brazilian effortlessly brought down Declan Rice’s weighted pass before a simple finish condemned Bournemouth to their 11th defeat of the season.

Cresswell looked to have produced the only blot on an otherwise blemish-free day for West Ham when referee Graham Scott showed him a straight red for a needless tackle on Fraser, but it was Scott who was left red-faced when VAR overturned his decision.

Four changes were also the order of the day for Eddie Howe’s Cherries as they looked to start 2020 in better fashion than 2019 had ended – but it did not go to plan.

On a day in which the injury-hit club had recalled Sam Surridge and stuck him straight on the bench, Bournemouth lacked any sort of get-up-and-go against West Ham and are now staring down the barrel of relegation after winning just one of their past 10 matches in the top flight.

They had started brightly, however, controlling the opening passages of play with Diego Rico carving out opportunities for his side.

But Howe’s men were dealt a sucker punch when West Ham took the lead, and suffered another blow soon after when they had a penalty appeal reviewed, and then denied, by VAR following an Angelo Ogbonna tackle.

The wind was truly taken out of their sails when they went 2-0 behind, unable to do anything to deny Haller’s acrobatics, and then 3-0 down, although Rico did force Lukasz Fabianski into a decent save in the closing stages of the first half.

Howe’s half-time team talk looked to have made some difference as Bournemouth came out after the break in a higher gear, substitute Junior Stanislas looking to single-handedly drive his side on as they strung passes together and finally enjoyed more possession.

But they had very little to offer after West Ham’s fourth goal, despite Dominic Solanke hitting the post in the final minutes.

‘The players were magnificent’ – what they said

Bournemouth manager Eddie Howe speaking to BBC Match of the Day: “We tried to do the right things, to pass the ball, but we defended poorly in the first half and you can’t do that in any game, home or away, and it cost us.

“We always look at ourselves first, it doesn’t matter who their manager is, you have to do the basics first and we didn’t do that. The effort was there but we are very stretched at the moment, we have players playing who aren’t 100% fit and that is very difficult at this level. So we need those injured players back quickly and we need to stay very resolute in this moment. I hate losing games and not doing my job to the best of my ability and making people happy.” 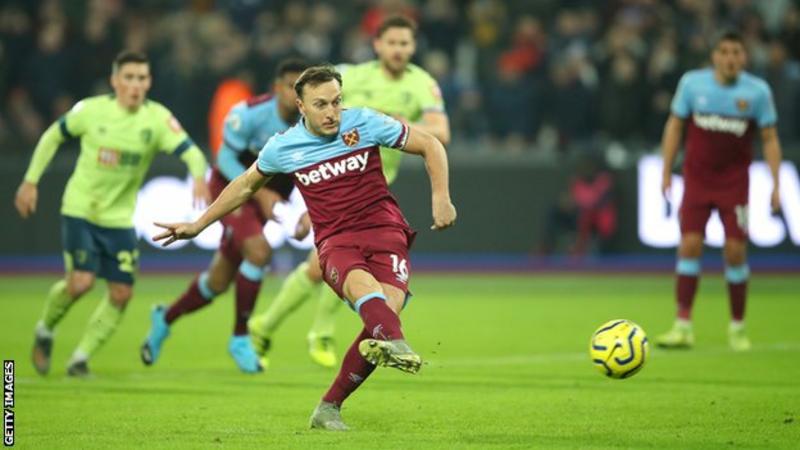 West Ham travel to Gillingham in the third round of the FA Cup on Sunday (18:16 GMT) before a league trip to Sheffield United next Friday (20:00 GMT). Bournemouth face Luton in the cup on Saturday (17:30 GMT) and welcome Watford in the league on Sunday 12 January (14:00 GMT).

Attempt missed. Pablo Fornals (West Ham United) right footed shot from the right side of the box is too high. Assisted by Manuel Lanzini.

Attempt saved. Ryan Fraser (Bournemouth) left footed shot from the left side of the box is saved in the centre of the goal. Assisted by Callum Wilson.

Attempt saved. Arthur Masuaku (West Ham United) left footed shot from the left side of the box is saved in the bottom left corner. Assisted by Aaron Cresswell.

Lewis Cook (Bournemouth) is shown the yellow card for a bad foul.

Arthur Masuaku (West Ham United) wins a free kick in the attacking half.

Attempt saved. Manuel Lanzini (West Ham United) header from very close range is saved in the centre of the goal. Assisted by Ryan Fredericks with a cross.

Dominic Solanke (Bournemouth) hits the right post with a header from very close range. Assisted by Ryan Fraser with a cross.

Ryan Fraser (Bournemouth) wins a free kick in the defensive half.

Sébastien Haller (West Ham United) wins a free kick in the attacking half.

Manuel Lanzini (West Ham United) wins a free kick in the attacking half.

Robert Snodgrass (West Ham United) wins a free kick in the attacking half.

Attempt missed. Aaron Cresswell (West Ham United) left footed shot from outside the box is too high from a direct free kick.

Robert Snodgrass (West Ham United) wins a free kick in the attacking half.

Celebrities
As a singer, songwriter, and actress, Andra Day is the whole package. She rose to stardom in 2015 with the...
Lifestyle
The Party Film Sales has closed further deals on Filippo Meneghetti’s romance “Two of Us,” which represents France in the...
TV & Movies
KATIE Price has defied the critics and posed in full make-up with her two daughters. The mum-of-five proudly shared a...
World News
HARRY and Meghan were last night urged to think of poorly Prince Philip and delay their Oprah TV chat. Two...
Beauty
In the world of shopping, there's always a worthwhile deal happening somewhere. And let's be real, there's never a better...
Fashion
A PAIR of childhood sweethearts have rekindled their relationship after bumping into each other in a bar in Benidorm after...
Recent Posts