PORT ST. LUCIE, Fla. — After firing the ball across the diamond for the final out of a 4-2 win over Venezuela, United States third baseman Todd Frazier found closer David Robertson near the mound and wrapped him in a hug. Soon, the entire team huddled on the infield at Clover Park, bouncing up and down, yelling and spraying alcohol as if they had won a championship.

Although Olympic baseball may not be as much of a priority in the United States as in other parts of the world, Frazier said that earning a spot in the Summer Games in Tokyo was one of the best moments of his baseball career, which includes 11 years in the major leagues and two All-Star selections.

“I wish everybody could understand,” Frazier said, “when you get an opportunity to play for the United States of America — or whatever country you’re with — you got to take that opportunity and run with it because you’re going to look back on your career and say, ‘You know what? That’s probably the most fun I’ve ever had to playing baseball.’ And it really is.”

With the most experienced and talented roster in the Americas Qualifier, Team U.S.A. won all four of its games in the tournament with a combined score of 29-10. In doing so, the United States ensured it would compete in the Olympics in a sport that was returning to the Games for the first time since 2008 and is known as America’s national pastime. 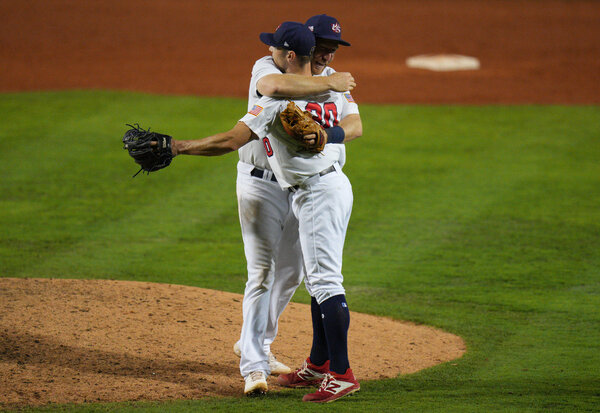 On Saturday, the United States joined Japan, South Korea, Israel and Mexico as part of the six-team Olympic field. In five Summer Games in which baseball appeared as an official sport, the United States won one gold medal (2000) and two bronze medals (1996 and 2008).

“This whole couple of weeks have been so intense,” said Manager Mike Scioscia, whose team had a game against Puerto Rico rained out during the tournament. “You’re really playing five elimination games and our guys rose to the occasion.”

The final spot for Olympic baseball, which begins in late July, remains up for grabs. By finishing second and third in the Americas Qualifier, the Dominican Republic and Venezuela advanced to the final qualifying tournament, which is slated from June 22 to 26 in Mexico and, for now, will feature at least three teams after two dropped out.

Despite restrictions that bar the usage of players on M.L.B. 40-man rosters for the Olympics and its qualifiers, Team U.S.A. featured a capable mix of unemployed veteran players and minor-league prospects on loan from their M.L.B. clubs.

Veteran players — such as Edwin Jackson, 37, who tossed two scoreless innings on Saturday; Robertson 36, who notched two saves; and Frazier, 35 — supplemented a roster that relied on young talent.

“It’s been an incredible experience to be able to put U.S.A. across my chest,” Williams said earlier in the tournament. “And for the first game, I got goose bumps and I can’t remember the last time a baseball game gave me goose bumps.”

While some M.L.B. teams may be reluctant to loan their players to Olympic teams because it interferes with their season or out of fear of injury, several Team U.S.A. players had made it a priority to participate in the qualifier. Frazier said the atmosphere of the stadium and intensity of the games felt like the M.L.B. playoffs.

When Team U.S.A. officials reached out, second baseman Eddy Alvarez, who was playing for the Miami Marlins’ Class AAA team, jumped at the opportunity and received permission.

“This is definitely for glory,” said Alvarez, who won a silver medal in the men’s 5,000-meter relay in the 2014 Games in Sochi. “And it feels like it’s going to be a little bit of a redemption in Tokyo because last time I fell short of the gold and this time it’s like I get a second chance.”

Being released by the Pittsburgh Pirates in May allowed Frazier to turn to what he referred to as the best Plan B ever: playing for Team U.S.A.

Against Venezuela, he made a double play to end the first inning with the bases loaded and went 4 for 4, hitting a solo home run in the seventh inning that gave the United States the winning margin. He pointed to the “USA” across his uniform chest as he rounded third base and signaled for the crowd to cheer louder.

Should another opportunity to play in the major leagues arise, Frazier said it would have to be a “big” one and with “a big team” in order for him to abandon his Olympic dreams. Playing in a long 162-game M.L.B. season, he said, can sometimes be a drag and feel like a job.

“Today and what we did here,” Frazier said, “playing for your country is not a job.”