The box office’s pandemic-era woes might not be entirely banished, but the massive opening-weekend success of Destin Daniel Cretton’s Marvel Cinematic Universe feature, “Shang-Chi and the Legend of the Ten Rings,” has made a sterling case for the return of the of blockbuster. With an estimated four-day gross of over $93 million, the Simu Liu-starring MCU entry handily busted a number of myths: that attention for the franchise is flailing, that audiences won’t turn out in theaters for event films, that tentpoles require established stars to lead them, and that Labor Day is an undesirable release date.

It also proves something that Marvel has long known, but has yet to fully capitalize on: moviegoers are very eager to see “diverse” MCU films starring actors of color and featuring stories rooted in their cultural identities. When Ryan Coogler’s “Black Panther” arrived in theaters in 2018, the film smashed record after record — and, much like “Shang-Chi,” wildly exceeded even the most optimistic expectations. That shouldn’t have come as a surprise: Recent studies report that diverse films make more money at the box office, full stop.

As “Shang-Chi” offers that lesson again, it’s time to diversify Marvel’s film slate, and fast. Marvel doesn’t like rolling out big schedule announcements without prodigious planning — coordinating the MCU is not an easy task — but there’s too much lag time between projects that feature “diverse” casts and stories, and that’s more clear now than ever.

It also leaves money on the table. A recent report from UCLA’s Center for Scholars & Storytellers analyzed over 100 films released from 2016 to 2019 and found that, “even after accounting for critical acclaim, big-budget films lacking in diversity make about $27 million less on their opening weekend, with a potential loss of $130 million in total.”

The success of “Black Panther” inspired Marvel to greenlight a sequel, although it took more than nine months to close Coogler’s deal to return. Why not greenlight a sequel ASAP? Why not plan spin-offs? Why not give the people what they want? And how does the behemoth franchise not making those same mistakes again with “Shang-Chi”?

In 2018, when asked about diversity, Marvel studio head Kevin Feige told IndieWire, “I think it’s only the beginning. I think you’ll see more and more of that in front of the camera, behind the camera and that that is what is required of us as storytellers. I think there’s a lot to pull from from the existing comics that they’ve been doing that for many, many years. Certainly with the support of Bob Iger and Alan Horn at Disney, we want these movies to reflect the world in which they are made, and be brought to life by all types of people behind the camera.”

Feige pointed specifically to the success of “Black Panther” as proof that Marvel moviegoers are eager for new stories made by diverse talents. “As audiences stay with us and audiences keep telling us, as they certainly did all around the world with ‘Black Panther,’ that they’re embracing new ideas and new visions and new places and new ways of telling stories, we will just continue to grow and build on that,” he said. 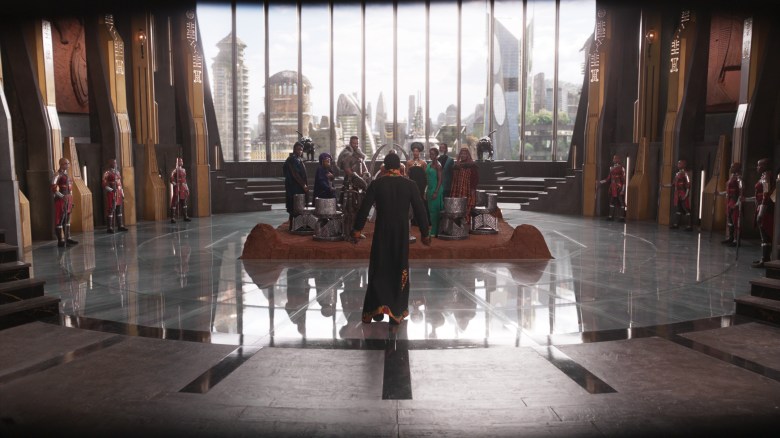 “Black Widow” filmmaker Cate Shortland echoed those thoughts when she spoke to IndieWire in May. “I think what’s happening is spaces are being created where we can run in and grab that space and hold it for other people.” She added that both Feige and Marvel Studios’ executive VP of film production Victoria Alonso indicated that diversity, both in front of and behind the camera, was paramount.

“I think Victoria Alonso at Marvel has been really great about pushing for more women to be involved, but I also think Kevin loves different voices,” Shortland said. “He’s such a great storyteller, and he’s not interested in telling the same story. He’s always trying to reinvent. I think that’s why he collaborates with all different people.”

These include “Spider-Man: No Way Home,” “Doctor Strange in the Multiverse of Madness,” “Thor: Love and Thunder,” “Ant-Man and the Wasp: Quantumania,” and “Guardians of the Galaxy, Vol. 3.” Also on deck is Coogler’s “Black Panther: Wakanda Forever” and Nia DaCosta’s “The Marvels,” in which Captain Marvel Brie Larson will share the screen with Iman Vellani as Kamala Khan and Teyonah Parris as Monica Rambeau.

Nearly four years after the smash success of “Black Panther” and continued number-crunching that makes plain just how much audiences want these kinds of films, that’s not exactly a thrillingly diverse batch.

More exciting are upcoming Marvel series including “Ms. Marvel,” which will introduce the Khan character, plus the Oscar Isaac-starring “Moon Knight,” the Dominique Thorne-starring “Ironheart” (the actress makes her debut in “Black Panther: Wakanda Forever”), and an in-development series focused on the women of Wakanda.

Pivoting is easier in TV, but Marvel should know better by now: Audiences want these stories on the big screen, too. Money talks, and now it’s time for Marvel to answer.

“Shang-Chi and the Legend of the Ten Rings” is now in theaters.