Britain’s Got Talent crowned their 13th winner this weekend after Colin Thackery sang his way into the nation’s hearts.

Now the 89-year-old has revealed he will be donating some of his £250,000 prize money to Royal Chelsea Hospital.

Colin was the oldest ever contestant to make it to the finals of BGT and wowed judges with his amazing singing voice, however it was Colin’s emotional inspiration behind his love for singing that earned him his winning place.

The war veteran told how he used to sing to his late wife Joan, who sadly passed away in 2006, adding that he would now sing to photos of her at home.

Moreover, Colin previously said that he felt Joan was “still listening” and would be “proud that he had made it this far”.

Following his big win on the ITV show, Colin appeared on This Morning talking about what he planned to do with his prize money.

The winner said: “Well first of all the hospital, because we are a charity and we are always collecting for something.” 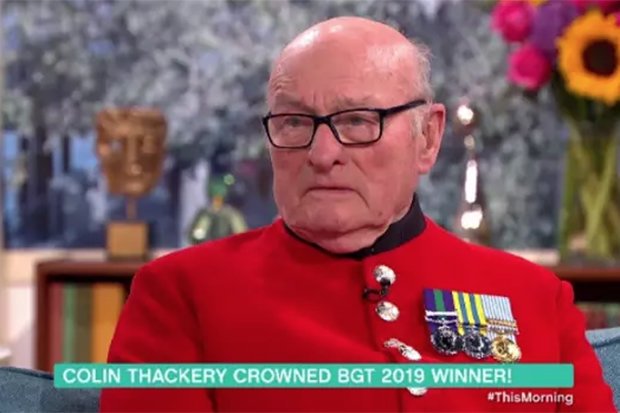 He added: ”We’ve got a new centre that we’ve been wanting to build, a visitors centre, activity centre. I’d love to think that I set the whole thing off.”

The pensioner currently lives in Royal Chelsea Hospital accommodation alongside other veterans.

As well as the donation, Colin also admitted: “And of course I’ve got family. I’ve got grandchildren wanting to get on the property ladder and all that sort of thing and of course A-Levels and all that.”

There was also magician, Ben Hart who came in at third place after he performed card tricks on stage.

And mysterious magic act X, who shocked in the final after he revealed his true identity as former BGT finalist Marc Spellman.