As per usual on The Chase, the first player, who tonight was Tom, takes on the cash-builder round unbeknownst as to which Chaser they’re going to be facing. Tom racked up a modest £3,000 on Wednesday’s episode on ITV with Bradley soon after reeling through which quizmasters he could be up against. In typical Bradley fashion, however, he couldn’t resist a swipe or two at the Chasers, including a jibe that Anne looked like a “Russin shotputter”.

Bradley told Tom: “It’s time to face the Chaser, but who will you be playing today?”

First up was Paul ‘The Sinnerman’ Sinha followed by Jenny ‘The Vixen Ryan, who was described by Bradley as “so hot, the last man who looked into her eyes needed a welder’s helmet.”

The third possible Chaser was Mark ‘The Beast’ Labbett with Shaun ‘The Dark Destroyer’ Wallace the fourth possible quizzer.

With Bradley reeling off the other four Chasers, Anne was the final possible quizmaster he said Tom could be facing. 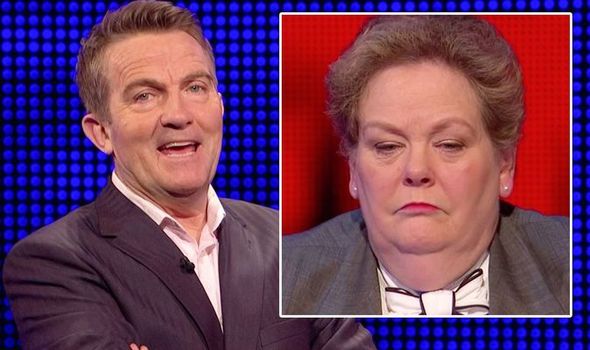 As Anne popped up on-screen, Bradley quipped: “Or is it The Governess, she’s got the body of an athlete, a Russian shotputter.”

The joke brought murmurs of laughter from the players and ITV studio audience, with contestant Marie left open-mouthed in shock by the swipe.

He wasn’t done there as Bradley added: “Named Vlad the Bad, I just added that bit on. I thought it added something to it, it doesn’t.”

Tom then admitted he wanted to take Shaun because he gets “rattled the easiest” but The Dark Destroyer was not the one to walk around the corner.

When it was revealed to be Anne taking to the hotseat, however, Bradley quickly began backtracking for his swipe.

“Oops,” Bradley said. “Wish I hadn’t have said that now.”

Used to the jokey back and forths with the host, Anne appeared unmoved by Bradley’s joke.

Celebrities
If you missed the devastating news, Breonna Taylor, the young black woman who was shot in her own home by...
Lifestyle
Keeping it real! Michelle Obama and Barack Obama’s daughters are “no longer thrilled” to be quarantining with their parents amid...
TV & Movies
Dancing On Ice returns to screens in January with a more glittering line up than ever taking to the rink.Bosses...
World News
Hollywood A-listers are reacting after no police officers were charged with the death of Breonna Taylor. On Wednesday, dozens of celebrities,...
Beauty
Makeup guru Jeffree Star has been known to make some wild style choices. His heavily inked body of tattooed art...
Fashion
Nike brought back the Killshot OG SP in May this year, arriving in stores with much fanfare thanks to the...
Recent Posts
We and our partners use cookies on this site to improve our service, perform analytics, personalize advertising, measure advertising performance, and remember website preferences.Ok