In scenes that aired tonight, Vernon Kay was back with his new ITV show, Game of Talents. This week he invited celebrity guests, TV presenter Stephen Mulhern and The Voice host Emma Willis to compete against each other – and it’s safe to say the pair got a bit competitive during each round. Stephen was partnered up with contestant DeeDee, while Emma was paired with contestant John. Each team took it in turns to guess which talent each of the eight guests had, and for each correct answer, the contestant won some money from the jackpot.

The first guest up was a little boy called Caleb, and DeeDee and Stephen had to guess what his talent was.

Luckily for them, they guessed the right answer as Caleb was a heavy metal drummer.

Emma and John then had to decide what talent David had.

After listening to the clues, Emma and John guessed the right answer of whistler. 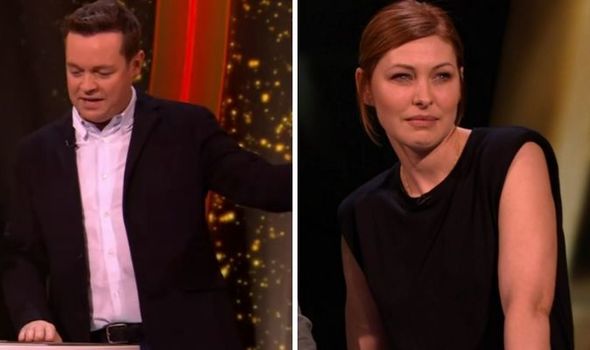 As each of the celebs took it in turns to guess, it was clear to see that Emma and Stephen had a bit of competitive banter between them.

After Emma had guessed an answer correctly, she turned to Stephen after getting on his wrong side and swiped: “I can see how angry he is.”

Viewers were loving how competitive Emma and Stephen were during the programme.

One tweeted: “Just love how competitive Stephen and Emma are.”

Another said: “So competitive! But who will come out on top?”

A third added: “Emma and Stephen against each other is going to be so good!”