The 100-year-old veteran who raised over £33 million for NHS Charities Together is getting the biopic treatment. Captain Sir Tom Moore the movie is being fast-tracked for production next year. According to Variety, Fred Films and Powder Keg Pictures won a bidding war for the life rights to the World War II hero.

Commenting on the announcement, Moore said: “I don’t know of any 100-year-old actors, but I’m sure Michael Caine or Anthony Hopkins could do a wonderful job if they were prepared to age up!”

Well it looks like the movie might start a lot earlier in the centenarian’s life as Benedict Cumberbatch leads the bookies’ favourites to play a young Captain Tom.

The Doctor Strange star is 2-1 for the role according to Coral Bookmakers.

While rumoured next James Bond Tom Hardy is right behind on 3-1. 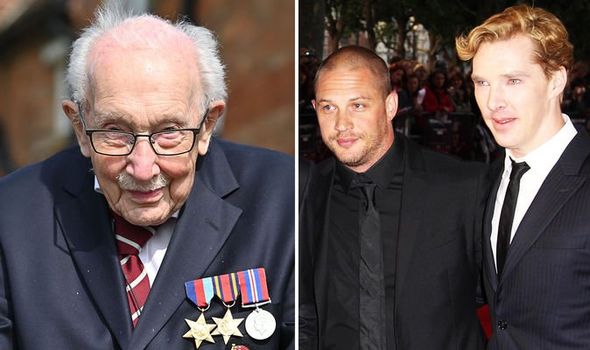 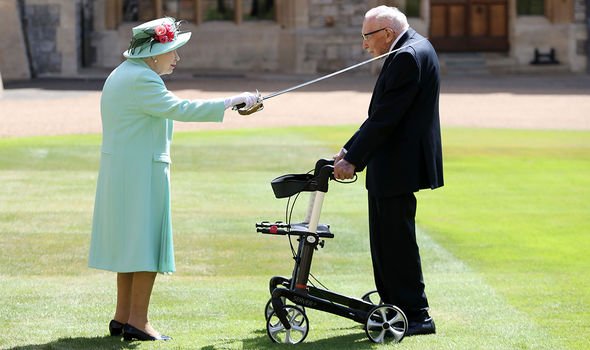 A Coral spokesman said: “Captain Sir Tom Moore has had the most incredible life so it would be only fitting that his story was played by a high-profile actor.

“We make Benedict Cumberbatch the favourite to take up the role of a young Moore.

“Tom Hardy, Tom Hiddleston and Jude Law are also prominent in the betting in what we expect to be a huge box office success.”

Nick Moorcroft and Meg Leonard, who are producing the Captain Tom movie, are also writing the screenplay.

In a statement they said: “This is a story about the power of the human spirit and Captain Sir Tom personifies that.

“We are honoured to be telling this unique and inspiring story and are excited about audiences getting to know the man behind the headlines.”

While fellow producer James Spring said: “At a time of fear and uncertainty, 161 countries around the world embraced the beacon of hope that Captain Sir Tom provided.”

He added: “We are privileged that Tom and his family have entrusted us to tell their story.”

Moore originally intended to raise £1000 by walking 100 laps of his garden before his 100th birthday.

But during lockdown his tenacity caught the hearts of the nation as he became a symbol of the Blitz spirit amid the pandemic.

After raising tens of millions for charity, Captain Tom was knighted by Her Majesty The Queen at Windsor Castle in a private ceremony.

After the war, he became managing director of a concrete company, while also being an avid motorbike racer.

A release date for the movie is TBC, but if it’s shot next year then 2022 seems a likely candidate.

Celebrities
The eyes of the world were on the royals when The Duke and Duchess of Cambridge said 'I do' on...
Lifestyle
Fans were right! When Taylor Swift dropped "folklore" back in July, she immediately sparked online speculation over the identity of...
TV & Movies
“The Truffle Hunters” is a stark contrast to many of this year’s acclaimed documentaries. Pandemics, wars and political failures are...
World News
A fearless pensioner has been left "raging" after a burglar broke into her home and pinched her cigs and lighter...
Beauty
Nordstrom's Black Friday deals this year are GREAT. Nay, SPECTACULAR. And one of the best ones so far is the...
Fashion
We will use your email address only for sending you newsletters. Please see our Privacy Notice for details of your...
Recent Posts
We and our partners use cookies on this site to improve our service, perform analytics, personalize advertising, measure advertising performance, and remember website preferences.Ok