Sports Personality of the Year: Captain Tom Moore is given an award

Following his heroic charity fundraising efforts earlier this year, Sir Captain Tom Moore was rewarded with the Helen Rollason Award during this evening’s Sports Personality of the Year. In order to hand him the award, Olympian Jessica Ennis-Hill arrived at his home and it was plain for all to see how much it meant to the World War Two veteran. However, when nine-year-old and fellow fundraiser Tobias Weller received the inaugural Captain Tom Young Unsung Hero prize moments later in his company, there was barely a dry eye among BBC viewers.

“It’s good to see you,” Captain Tom replied. “I never anticipated seeing you so close, you’re such a wonderful person, thank you so much for coming here.”

The Olympian then detailed how proud she and the public was of Captain Tom’s efforts throughout the coronavirus pandemic to raise funds for the NHS.

As a result, his daughter handed him over the Helen Rollason Award and it was clear to see how elated he was. 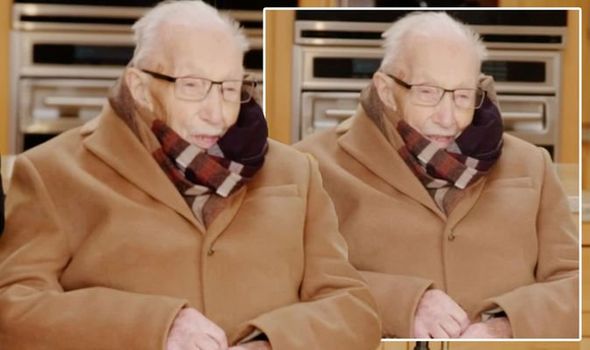 We will use your email address only for sending you newsletters. Please see our Privacy Notice for details of your data protection rights. Sir Tom warns of elderly left in isolation during coronavirus pandemic

“Thank you very much. This is a magnificent award and I never, ever anticipated that I would receive this award, particularly from you,” he told Jessica.

However, the plaudits didn’t stop there as Captain Tom was told Sports Personality of the Year would be naming an Unsung Hero Award in his honour.

“Ah s**t SPOTY has got me crying now,” tweeted a third. “Watching 9 year old Tobias chat to Captain Tom has got me blabbing again.”

A fourth added to the conversation: “Who else is in floods of tears but also brimming with pride about Captain Tom & Tobias. Truly inspirational #SPOTY.”

While a fifth admitted: “Tobias and Captain Tom. I am a sodden mess of tears.”

“@BBCSPOTY has me in tears! Captain Tom and Tobias are wonderful examples of turning adversity into triumph,” concurred a sixth SPOTY viewer.