Cutting to the Chase: How Pandemic Protocols Are Streamlining Student Films

And maybe that’s not all bad.

The inconvenience of remote work (read: Zoom fatigue), smaller crews to allow for social distancing and requirements to shorten shooting hours has put artistic pressure on students to create shorter films, and that’s good for aspiring filmmakers, academics say, pointing to a silver-screen lining of the pandemic to young film-makers. 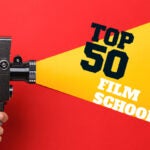 While it’s too soon to tell whether the pandemic will be reflected in the length of student films entered into film festivals next year, Galloway said Chapman has been encouraging shorter films for students in response to pandemic protocols. Those shorter films, he added, can be a boon on the festival circuit, where many students seek to launch their film-making careers. Shorter films are easier to schedule for screening during a festival where there is much demand on venues as well as the viewers’ time.

And, Galloway said, putting all your funding into fewer minutes can provide a better showcase for budding talent.

Galloway said there has never been a time limit on the students’ “capstone” film project, so films have tended to run 45 to 125 minutes at Chapman. “So we are saying, bring it down to (fewer) minutes and you can focus on quality,” he said. “You have a much better chance of getting your film seen if it’s shorter.” 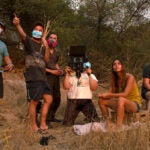 And even in at schools where student films did not get shorter during the pandemic, some professors say the inconvenience of remote work and location protocols has necessarily resulted in less complicated production processes as well as tighter storytelling, leading to stronger movies.

Greg Sorvig, artistic director of Heartland Film who oversees the organization’s Academy Award-qualifying Indy Shorts International Film Festival and Heartland International Film Festival events in Indianapolis, said students are usually encouraged to keep films as succinct as possible, and pandemic protocols seem to be accelerating that approach. “Sometimes you can cut the first act of a film,” Sorvig daid. “I think the shorter films that we’ve been seeing have been a bit tighter, whether it’s as a result of COVID, I’m not sure.”

Gail Katz, a producer and a professor at the USC School of Cinematic Arts, said USC has not observed shorter student films being made during the pandemic crisis. However, she told TheWrap that more complex preproduction, smaller crews and other factors slowed down production, which has improved storytelling.

“There were fewer complicated shots and set-ups, and no crowds or extras,” she said. “Some productions relied more on stock shots and visual effects for scope and achieving desired storytelling.” Even so, and despite remote collaborations between students across the U.S. as well as abroad, she said the quality of the films has remained high. 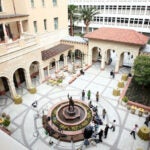 Abigail Severance, interim dean of the School of Film/Video at CalArts, said with a laugh that with or without a pandemic, students usually “make work just a little to long for a festival, and then they regret it.” While she has not noticed shorter films yet, she said some students have shifted their content with more focus on social issues and racial justice as well as storytelling technique during the pandemic.

“They’ve had to work in ways they never had to before,” she said. “They are more willing to take risks, from they themselves acting in them, to using their families and their quarantine ‘pods.’ We are seeing more films about the outdoors, and landscapes. At CalArts we really encourage experimentation, and trying anything — that has really blown open this year.”

Said Ross LaManna, film chair at ArtCenter College of Design, “We were prepared for COVID restrictions in an odd way because we teach our students to leverage creativity and embrace limitations as a challenge instead of being defeated by them.”

Chapman’s Galloway said while restrictions are beginning to ease when it comes to indoor filming and students traveling together, Chapman’s approximately 1,600 film students will continue to follow local production guidelines as well as guild production protocols at least through the end of the year. Chapman also retains a full-time COVID officer, and each student production has its own COVID officers, who are older students or outside hires. There will continue to be limits on shooting days and the number of students allowed on each set.

Still Galloway said, making shorter student films will be encouraged long after the pandemic is over. “This is a long term move for us,” he said. 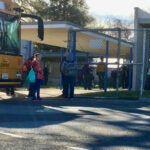