Elvis Presley is the most successful solo artist of all time and throughout his short life, he felt he owed much to Colonel Tom Parker. However, over the years some fans have argued that The King’s manager took advantage of the star, pushing him to his limits and taking too big a cut of his pay. But now Priscilla Presley has defended The Colonel during a dinner with Tom Hanks, who will play the manager in this year’s Elvis movie biopic.

Baz Luhrmann has been shooting his Elvis movie in Queensland, Australia with Austin Butler in the title role.

The biopic will focus on The King’s relationship with Colonel Tom Parker over his incredible career.

During a new interview on The Late Show with Stephen Colbert, the actor said Elvis’ manager was “both a genius and a scoundrel.”

Hanks added: “He was a very disciplined man, but also a guy who you might want to check your wallet to make sure you still have all those fives and tens.” 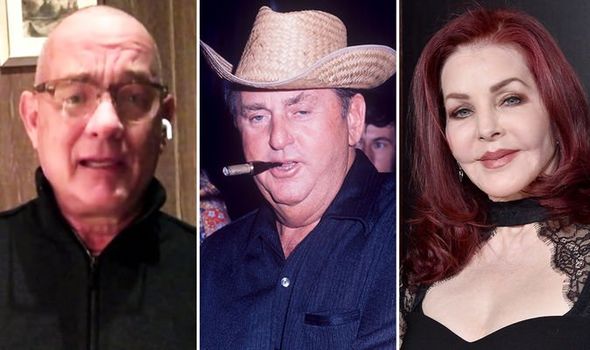 But when Hanks’ wife Rita Wilson organised a dinner with Elvis’ ex-wife Priscilla Presley, the actor was surprised to hear her defend The Colonel.

The Oscar-winning star said: “I was expecting to hear stories about the distrust she had for Colonel Tom Parker over these many years.

“And she said, ‘No. He was a wonderful man, and I wish he was alive today.

“‘He took really great care of us. He was a scoundrel in his way.’”

To play Elvis’ manager, Hanks has shaved his head bald and admitted he doesn’t look anything like The Colonel.

The 64-year-old said: “Let’s just say the people who played gorillas in Planet of the Apes spent less time in the make-up chair than I did on this movie.”

Billy continued: “I think Elvis was destined to be as big as he was. But the Colonel, with his intelligence n’all…he knew the right people and did it the right way to make big money and so I can’t take that from him.”

Believing it was a 50/50 deal between the two, The King’s cousin added: “I think Elvis would have been still a really big star even if he hadn’t had The Colonel.”

In fact, Elvis’ cousin went as far as to say that he thinks The King could have gotten away from The Colonel later on and actually become bigger than he was.

Billy’s son Danny, who grew up at Graceland with his father and Elvis, also featured in the video.

He spoke of how had The Colonel allowed it, The King could have become even bigger with a world tour.

Across his entire career, Elvis only performed three gigs outside the USA and they were all in Canada.

Despite his hopes of one day having a world tour, it’s believed that it was the Dutch-born Colonel’s illegal alien status that meant this never happened.