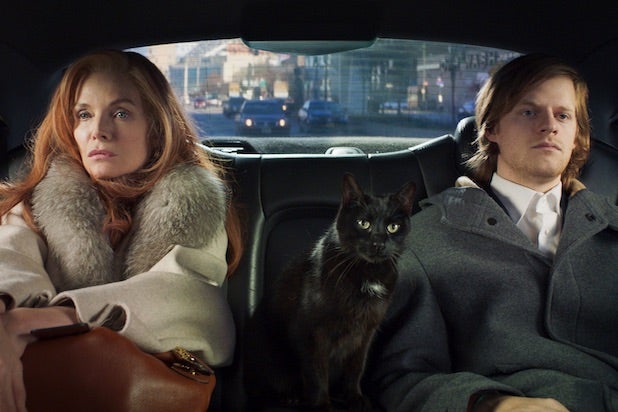 “French Exit,” which closed last fall’s (mostly virtual) 2020 New York Film Festival, takes a lot of cues from its lead character — an eccentric, rich widow played with delicious zeal by Michelle Pfeiffer. The look is elegant and classy, but underneath things get pretty dark and twisted.

Still, the film wears its weirdness more lightly than the character. Frances Price (Pfeiffer) may be defiantly unconventional, thumbing her nose at social norms and the usual modes of parenting, but the movie tries to be dark and odd in a more beguiling way; it undercuts its polished stateliness with quiet black humor, though in the process it sometimes struggles to find the right tone for its polished, deadpan fatalism.

The result is a showcase for Pfeiffer’s sly but all-consuming embrace of a woman barely able to give a moment’s thought to anybody but herself, and one who surrounds herself with a motley collection of oddballs and misfits, all of whom seem to speak a little more formally than the situation calls for.

“I don’t like these people,” says one character after spending a bit too long in Frances’ parlor. “They’re not normal people!”

He’s right, of course — they’re not normal people. But they are fun to be around, in an exasperating kind of way.

“French Exit” was directed by Azazel Jacobs (“Momma’s Man,” “The Lovers”) and adapted by Patrick deWitt from his 2018 novel. It begins in flashback, with Frances showing up at the boarding school where she’s stashed her son, Malcolm. He’s only about 12, but she seems determined to take him out of school for good. “What about my clothes?” he says as they head for the door. “I’ll buy you new clothes,” she says.

Her husband, it seems, has recently died: Frances discovered his body as she prepared to leave New York for a long weekend in Vail, but didn’t tell anybody because she didn’t want to miss her vacation and figured he’d still be there when he got back. That landed her in jail briefly, but now she’s out, she has a huge inheritance, and she’s finally ready to have Malcolm in her life.

One scene later, 20-odd years have passed and Malcolm (now played by Lucas Hedges) is an odd duck himself: he’s stilted and formal, but also so passive and weary that he’s afraid to tell mom that he’s engaged. He may be in his 30s, but he follows behind her as dutifully as the kid who walked out of school with her two decades earlier.

And following her means moving to Paris. Frances, it seems, has burned through her entire inheritance, which isn’t hard because she spends freely and hasn’t worked a day in her life. An accountant tells her that her only choice is to quietly sell off all the art, furniture, jewelry and clothes she owns, take the proceeds in cash and start over. She reluctantly agrees, though it doesn’t fit at all with her plan — which was, she says, “to die before the money ran out.”

So Frances and Malcolm get on a cruise ship and head to France, leaving his fiancé behind but taking along a cat, Small Frank, who they’re sure contains the soul of her late husband. (Spoiler alert: They’re right.)

With the cat, a friend or two and an ever-dwindling stack of cash, Frances and Malcolm live a Parisian life of aimless extravagance, though that takes a hit when Small Frank runs away amid intimations that Frances may have a darker plan in mind. This brings in a private detective, a fortuneteller and the voice of Tracy Letts as Small Frank — and while the wilder, more absurdist elements push the film in the direction of farce, those lighter touches sometimes struggle to register as the film itself grows darker and sadder.

But that’s the tricky balance Jacobs is trying to achieve in a classy chamber comedy that enjoys flirting with unpleasant black humor. It’s always watchable when Pfeiffer is around to delight in overplaying Frances’ imperious theatrical grandiosity, and Hedges has long been good at playing characters who have a kind of interesting passivity.

The weirdness is always given elegant settings, and it plays out to a musical score that occasionally tries to make you think the film is lighter and funnier than it is. But maybe that’s the point: “French Exit” walks an uneasy line between darkness and light, elegance and eccentricity, delicious humor and disturbing tragedy.

These are not normal people, and this is not a normal film. But Pfeiffer makes it an odd, enjoyably twisty ride.