Another Emmy nomination morning has come and gone and now all that’s left is the complaining. But in all seriousness, Tuesday’s nominees for the 2021 Emmy Awards were simultaneously eclectic and dull, with some out-of-left-field inclusions and category dominance that left minds reeling and unimpressed.

There will be plenty of time for further analysis of which shows are best positioned for the final round of Emmy voting, as well as how platforms are promoting their wares to maximize exposure for contenders and attempting to win the hearts of the Emmy Awards judge and jury: The Academy of Television Arts and Sciences.

But being only a few days removed from the nominations themselves, feelings are still running deep and the short-staffed crew of IndieWire’s TV podcast “Millions of Screens” decided it was only right to explore those emotions and examine how we’re doing, as we live in a world where Hulu’s “Pen15” received only three Emmy nominations.

Less connected to any one nomination and much more connected to a huge amount of nominations, Tuesday’s announcement suggested that we might just see a race for Outstanding Drama Series after all.

Season 4 of Netflix’s prestige series “The Crown” dominated the whole of the winter awards season with Disney+’s “The Mandalorian” hardly putting up a fight. But, as per usual, the Emmys serve as a completely different ballgame and when the dust settled, both shows had scored the most nominations of the year with 24 mentions apiece.

But if you remain unconvinced that the little Star Wars series that could has a chance in Hoth of surpassing the Princess Di show, the Emmy nominations delivered an extra bit of drama in the appropriately named Drama Series category.

Having completed its own fourth season, Hulu’s “The Handmaid’s Tale” made a big splash with the TV Academy, a development that sounded an awful lot like full-throated support for the dystopian tale that saw this season upending the status quo and taking some meaningful steps toward its ultimate endgame.

Only time will tell if “The Crown” could actually be upset in the Drama Series category it seemed destined to win, but things are certainly less clear than they were a week ago, and any kind of narrative shake-up in an awards season that can sometimes feel predetermined is a welcome development. 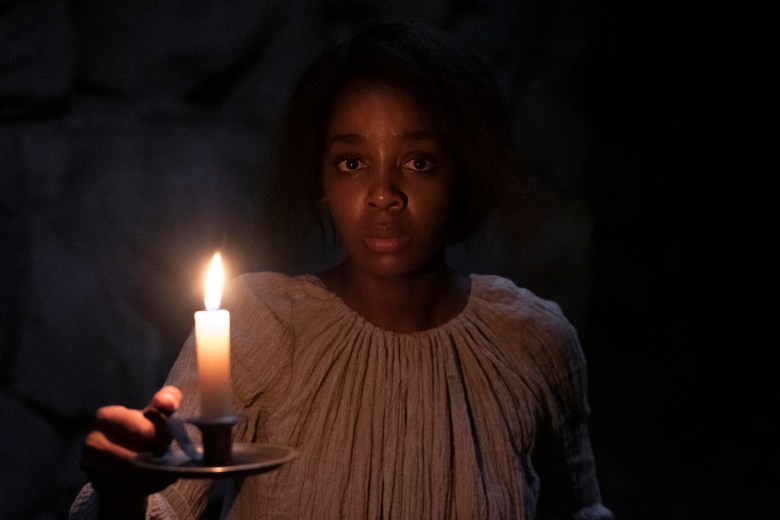 Thuso Mbedu in “The Underground Railroad”

When you care about anything enough, you’re bound to be disappointed by things that do and do not happen, which makes it no surprise that some of our TV experts found themselves a little heartbroken with this year’s Emmy nominations.

And if there’s one particular lack of nomination that really left us feeling raw, it was the exclusion of Thuso Mbedu from Amazon Prime Video’s “The Underground Railroad” in the Lead Actress in a Limited Series category. Though an unknown in the United States, Mbedu served as the heart, soul, and backbone of Barry Jenkins’ adaptation of the award-winning novel, delivering a mesmerizing performances as Cora, an escaped slave trying to evade a singularly focused slave catcher, as well as her own painful memories.

The limited series Lead Actress category was among the most competitive of the year, one where the TV Academy felt comfortable leaving Nicole Kidman off the list, so while Mbedu missing isn’t shocking, it’s upsetting all the same. Her meticulous performance carried the weight of American’s poisonous history with slavery, as well its ongoing institutional racism. Snubs aren’t real. No one is owed a nomination for an award. But if they were real, Mbedu was brutally snubbed.

In the weeks leading up to the announcement of nominations, it was pretty clear that Disney+’s “WandaVision” was going to have a good morning, but it seems doubtful that anyone anticipated just how good a morning the MCU’s first streaming series was going to have. With 23 nominations, lagging just one behind nomination leaders “The Crown” and “The Mandalorian,” the tale of Wanda Maximoff and Vision in the aftermath of the Marvel event known as “The Blip” captured the minds and hearts of the TV Academy while leaving others within the industry a bit flummoxed.

It’s not that there weren’t things to love about the limited series, it’s just that it was a bit of a surprise just how deep the organization’s love ran, embracing a genre and franchise largely overlooked by the Oscars, while serving as an attempted love letter to television. Sure, why not give “WandaVision” 23 Emmy nominations, especially if it means largely overlooking the outstanding achievements of limited and anthology series including “The Underground Railroad” and Amazon Prime Video’s “Small Axe?” That makes sense.

Sure. Good. Good times. This is fine.

For more feelings about this year’s crop of Emmy nominees, tune in to this week’s episode of “Millions of Screens” with Deputy TV Editor Ben Travers and TV Awards Editor Libby Hill, where Ben and Libby attempt to carry on despite their missing co-host, Creative Producer Leo Garcia, and explore their reactions to the TV Academy’s decision making process. Also, the pair discusses the recent announcements around this year’s Primetime Emmy Awards ceremony, featuring Cedric the Entertainer as host.

“Millions of Screens” is available on Apple Podcasts, Breaker, Google Podcasts, Spotify, and Stitcher. You can subscribe here or via RSS. Share your feedback with the crew on Twitter or sound off in the comments. Review the show on iTunes and be sure to let us know if you’d like to hear the gang address specific issues in upcoming editions of “Millions of Screens.” Check out the rest of IndieWire’s podcasts on iTunes right here.

Celebrities
The Chicago Sky beat Diana Taurasi on Sunday and then they beat down her psyche on Tuesday -- trolling the...
Lifestyle
The queen of ‘Queens’ are here to stay! The highly-anticipated new series premiered on October 19 with plenty of drama,...
TV & Movies
TEEN Mom OG fans think Catelynn Lowell’s “sex ed talks” with her little brother Nick, 14, are “weird.” The backlash...
World News
The owner of Pornhub, one of the largest pornography sites in the world, has settled a lawsuit brought by 50...
Beauty
Written by Shannon Peter All products on this page have been selected by the editorial team, however Stylist may make...
Fashion
LAW of attraction is the theory that humans send out signals to the universe, which can in turn affect all...
Recent Posts