Good Morning Britain has sparked anger and derision after mistakenly showing the music video for Ukraine’s 2021 Eurovision entry, while also getting the name of this year’s act wrong.

This week, Eurovision 2022 officially kicks off, with the semi-finals taking place on Tuesday and Thursday before Saturday’s grand finale.

Several of this year’s acts have been tipped as possible contenders for the victory, including the UK’s Sam Ryder, Ukraine’s Kalush Orchestra and Italy’s Mahmood And Blanco, who will be performing in their home country after Måneskin’s win last year.

However, on Tuesday’s GMB, the presenters were discussing Ukraine’s entry… while completely messing up on all the details concerning the act.

Rather than show a music video for Kalush Orchestra’s Eurovision song Stefania, the video for Go_A’s track Shum – which resulted in them finishing in fifth place in 2021 – was shown instead.

To make matters even worse, it appeared as though Richard Arnold and Susanna Reid thought that Kateryna Pavlenko, the lead singer of Go_A, was actually called Stefania. 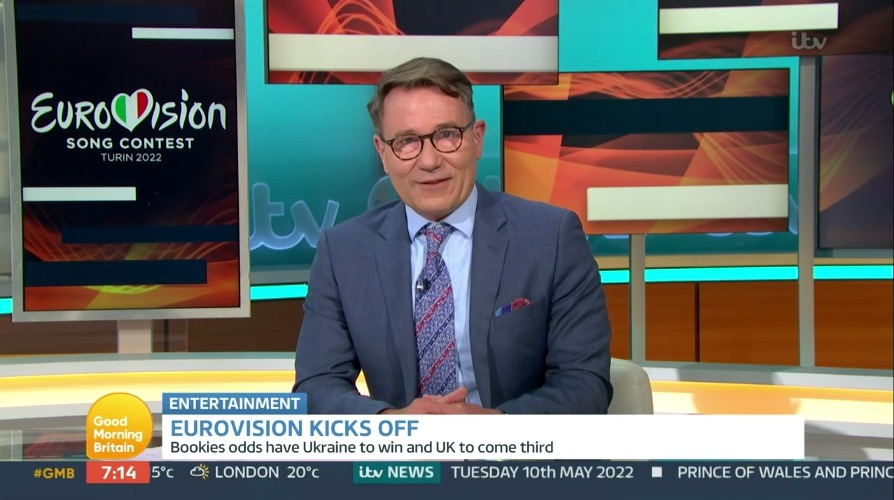 Susanna asked: ‘Before you go on, have we got a little bit more of Stefania from Ukraine?’

The panel watched some more of the video, which showed Kateryna standing up in an open-top vehicle as it drove along a deserted road, having been filmed in a forest near Chernobyl.

‘I mean I think Stefania’s got it,’ the GMB co-host remarked.

‘That’s got Eurovision written all over it, as well as obviously the poignancy of the ethos behind the whole contest, doesn’t it?’

Richard then chimed in to say that he believes the UK’s ‘bold postering behind Ukraine and our support of Ukraine’ may have ‘helped our situation with the leaderboard’, a comment that was criticised on social media.

Several Twitter users expressed their outrage after realising that the wrong video was shown and that rap group Kalush Orchestra’s name had been mistaken for their song title.

‘Hahaha @GMB showing a clip of last year’s Ukraine entry and Richard being all negative about the UK. Can’t say I’m surprised. Do your research,’ another wrote.

Someone else who pointed out the error stated: ‘You’ve just played last year’s Ukraine entry by Go_A claiming it will win Eurovision tonight. Nil points to GMB.’

Addressing the gaffe on Twitter, Richard said that it was a ‘library footage error’, and assured viewers that it would be corrected as he added: ‘Can happen on live TV.’

He added in another tweet that the mishap would be addressed live on air, as he told one Twitter user to ‘tune in tomorrow’.

Good Morning Britain airs weekdays from 6am on ITV.