Michael Myers is an unstoppable killing machine — but even he wasn’t able to outrun the coronavirus. Halloween Kills, the highly anticipated horror sequel originally set for release on Friday, Oct. 16, was delayed a full year due to the global pandemic.

Jamie Lee Curtis, who returned as Laurie Strode in the 2018 box office hit Halloween, and the upcoming Halloween Kills, also signed on to reprise her role in Halloween Ends, the supposed final chapter of the David Gordon Green-directed trilogy, which has yet to be filmed and was subsequently delayed until 2022.

While speaking exclusively to ET’s Keltie Knight, Curtis voiced her support for the films’ delays. “Without question, no question,” she said in response to fans needing to see these movies in an actual theater when it’s safe to do so.

Despite the delays, the first sequel already completed principal photography last year before the coronavirus pandemic hit. Curtis described the sequel as “very different” from the original 1978 horror classic and its 2018 predecessor.

“It’s very much part of today’s fabric,” Curtis mused. “There’s a lot of rage internal in the town and that is sort of what drives the story, the communal rage which feels obviously timely,” she added, referencing current events.

After the 2018 installment picked up 40 years following the original Halloween, Kills will continue that re-established timeline and include other original characters, Sheriff Leigh Brackett (Charles Cyphers) and Nurse Marion Chambers (Nancy Stephens) as well as Tommy Doyle and Lindsey Wallace, the young children Laurie babysat during her first encounter with The Shape (played both by James Jude Courtney and original actor Nick Castle). 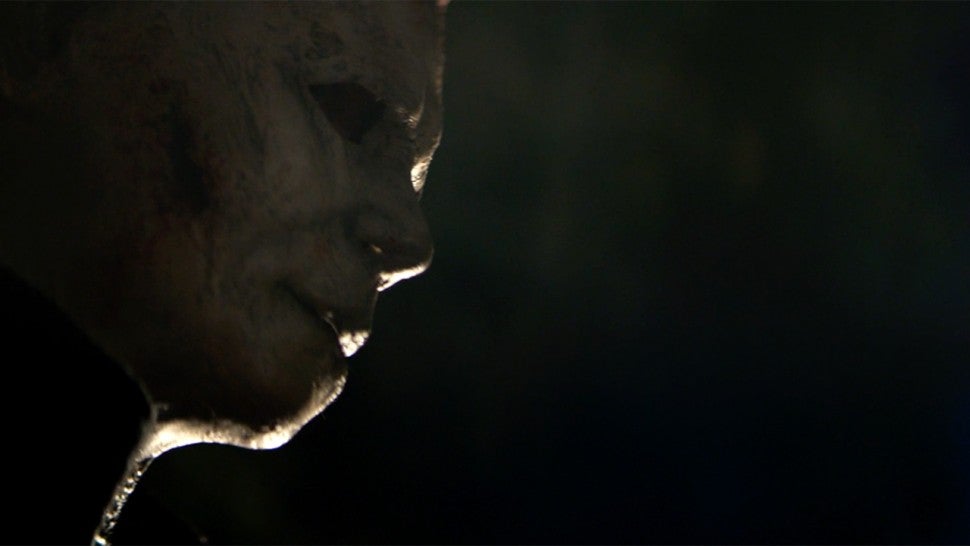 While Brian Andrews played Tommy in the original, with Paul Rudd taking over the role in 1995’s Halloween: The Curse of Michael Myers, Anthony Michael Hall will play the grownup version here. Real Housewives of Beverly Hills star Kyle Richards, now 51, will reprise the role she first played at just eight years old.

“I really wanted to be in the last one so I was really excited they asked me to be a part of this one,” Richards shared with ET about the reprisal over 40 years in the making.

The former child star, who filled in as a guest correspondent during ET’s 2018 interview with Curtis, admitted that reunion probably helped her score the sequel gig. “I think it actually did have something to do with it,” she said. “After that, I went to the premiere and I was on the red carpet and everybody kept asking, ‘Why wasn’t Kyle involved?’ and I was like, ‘Hey, yeah, why wasn’t I?'” It wasn’t long before her agent called with some good news for the sequel.

Richards, who rocked bangs to recreate Lindsey’s original hairstyle, also dished on her filming experience. “I was a baby!” she quipped about her time on the original set. “When I was little, I didn’t realize what we were making. People always would ask me, did you realize how scary the movie was? No, I didn’t. But I can tell you right now as an adult, it’s really scary, it’s really scary actually making the movie,” she shared.

One thing that didn’t change was her bond with Curtis. “She is just such a great person and she is great to work with and the fact that we are working together after 40 years is so incredible and it made me a little emotional on the last day of filming,” Richards revealed.

“I always told the story about how when I was eight years old and we did the original Halloween, the night I wrapped, she carried me to my dressing room. So when I wrapped this time I said, ‘Jamie, do you remember what you did 40 years ago?’ and she said ‘Yeah I do,’ and she picked me up,” Richards recounted. “It’s very sentimental to me and it’s really exciting to be part of the franchise,” she gushed.

While Richards is making a long-awaited return to the franchise, newcomers Judy Greer and Andi Matichak don’t have to wait as long between appearances. Both actresses appeared in the 2018 film as Laurie’s daughter, Karen, and granddaughter, Allyson, respectively. Also returning for Kills is Dylan Arnold as Cameron, whose father, Lonnie (played now by Robert Longstreet), bullied Tommy as a child in 1978.

Even with the delays, fans have had their first look at the film thanks to a behind-the-scenes video Curtis shared on her social media last year. In the short montage, fans were shown a night shoot coming together, Green orchestrating a scene, a child trick-or-treating as cameras roll, a burning house and, of course, the franchise’s masked killer. The video ends with Curtis lying on a stretcher covered in fake blood and offering the camera a smile and proclaiming, “Happy Halloween!”

Additionally, a short teaser was released this summer to help tide fans over until next year, offering a hint at how Myers would survive the night after seemingly being trapped in a burning house and left for dead in the climax of the 2018 film. The first look at Kills reveals fire engines rushing toward the house as Laurie frantically screams, “Let it burn!”

While speaking with ET in the spring, Greer promised the sequel is “action-packed.” “I was always out of breath,” she said, adding the sequel wastes no time getting to the heart of the story. “In that first movie, we were saying hi to our old audience and then introducing ourselves to our new audience, like the generation that maybe didn’t know the original. And in this movie, we’re jumping in, if you catch my drift.”

Fans know there will be no shortage of carnage, thanks to Greer’s Instagrams of her blood-covered hands and bloody prop knives. She revealed she spent days in the same bloody costumes, confirming filming picks up right where they left off in the last film.

As of now, only Curtis is confirmed to return for the next installment, Halloween Ends, which she says has to do with “legacy.” And with no other cast members announced yet, it’s unclear which other characters will survive the night in Kills.

Halloween Kills is scheduled to slash into theaters on Oct. 15, 2021, with Halloween Ends slated for the following year on Oct. 14, 2022.