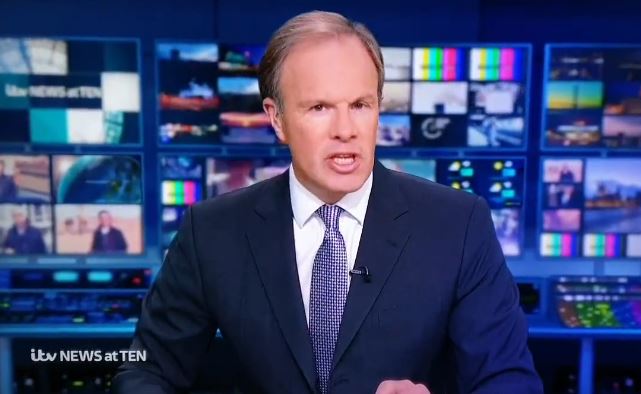 ITV News presenter Tom Bradby has been applauded for ‘capturing the mood of the nation’ with his no-holds-barred introduction of the alleged Downing Street Christmas party.

Tom kicked off the network’s 10 o’clock news by referring to leaked footage of Boris Johnson’s senior aides joking about a Number 10 bash, which would have been in breach of last year’s lockdown rules.

In the clip, the Prime Minister’s then press secretary Allegra Stratton and adviser Ed Oldfield, along with other aides, were filmed joking about a ‘fictional’ party in December 2020 in a mock press conference.

‘They literally look as if they are laughing at us, you, me, all of us,’ Bradby said as he began the news.

‘Remember last Christmas? London was in Tier 3, all indoor gatherings banned, lives, we were told, could be at stake, the whole country about to go into lockdown, Christmas all but cancelled.

‘Meanwhile, Downing Street staff were rehearsing their new press secretary for her televised press conferences. One asked a bit of a jokey question about a party allegedly held four nights before.’

ITV then played the footage, which saw Mr Oldfield asked Ms Stratton: ‘I’ve just seen reports on Twitter that there was a Downing Street Christmas party on Friday night, do you recognise those reports?’

Ms Stratton replied ‘I went home’ before appearing to consider what the correct answer should be.

‘Would the Prime Minister condone having a Christmas party?’ Mr Oldfield then probed.

Ms Stratton asked ‘what’s the answer’ and staff in the press room appeared to suggest ideas, with one saying ‘it wasn’t a party, it was cheese and wine’.

On Tuesday, Downing Street again insisted there was no Christmas party and coronavirus rules had been followed at all times.