“I wouldn’t be surprised if there were criminal charges filed,” ESPN announcer Mark Herzlich says 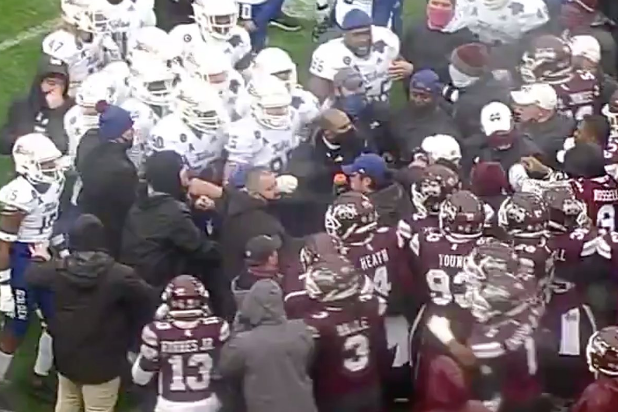 The Mississippi State and Tulsa football teams got close on Thursday, but it wasn’t to wish each other a Happy New Year. Instead, a wild brawl broke out after Mississippi State upset Tulsa in the Armed Forces Bowl in Fort Worth, Texas, with several punches thrown and one Tulsa player even getting kicked in the face.

You can get a look at some of the brawl by checking out ESPN’s clip below:

The chaotic scene lasted for several minutes while coaches, administrators and state troopers looked to break up the melee. It’s unclear what set it off, but tensions were already running high after the two teams exchanged words and later, a few shoves, during pregame warm-ups.

Tulsa safety TieNeal Martin and Mississippi State wide receiver Malik Heath were “in the middle of the most egregious parts of the melee,” the Forth Worth Star-Telegram reported, while other players attacked those who had fell to the ground. Later, Martin, after throwing some shots, was kicked in the head after his helmet came off; it’s unclear what his status is on Friday morning.

“I wouldn’t be surprised if there were criminal charges filed,” ESPN announcer Mark Herzlich, who called the game, said about the brawl. “You can’t do this. You can’t just rip people’s helmet off and kick them in the face.”

On top of that, Kendarin Ray, a safety for the Tulsa Golden Hurricane, had to be helped off the field and “likely suffered a concussion,” per Tulsa World.

Here’s another angle from the start of the brawl, if you’re interested:

Not everyone was heavily involved, however. For example, Mississippi State coach Mike Leach was busy celebrating in the stands with fans after his team took down the #24 ranked Golden Hurricane:

Mississippi State won 28-26, in case you were wondering.