NBC’s Nurses puts the spotlight on the unsung heroes of healthcare.

The Canadian medical drama, from the team behind Rookie Blue, follows five rookie nurses — Grace (Tiera Skovbye), Ashley (Natasha Calis), Keon (Jordan Johnson-Hinds), Naz (Sandy Sidhu) and Wolf (Donald MacLean Jr.) — working on the front lines of the busy downtown Toronto hospital St. Mary’s, dedicating their lives to helping others, while struggling to help themselves. The series, which debuts stateside Monday, Dec. 7 and was filmed pre-pandemic, opens with the young nurses thrown into the deep end on their first shift after a terrorist van attack leaves the hospital overflowing with patients.

“It couldn’t be a more timely premiere,” Skovbye, who played Betty’s older sister, Polly Cooper, on Riverdale, exclusively tells ET of the medical drama’s U.S. premiere. “I think it’s a really wonderful time for a show like this to showcase the hard work that nurses do, because right now they’re doing incredibly, incredibly hard work. I really think people are going to resonate a lot with it right now.”

With a dash of Grey’s Anatomy soapiness and a sprinkle of ER medical wizardry, Nurses charts the rookies’ journeys as they stumble through challenging career missteps and tangled romantic webs. As it will become glaringly clear rather quickly, they don’t have all their stuff together.

“Grace has worked in the medical field before, but for a lot of them — when you first meet them — it’s their first day. And it’s high stakes because they’re in a busy downtown Toronto hospital. It really showcases all the work and the whole range of care that a nurse does while also showing the personal struggles that these five young nurses go through while they navigate their personal life, their new job, how to be a good nurse, what it means to be a good nurse, their relationships and their relationships with each other,” Skovbye teases. “You get to see the full range of the entire emotional scope of what a nurse can go through.” 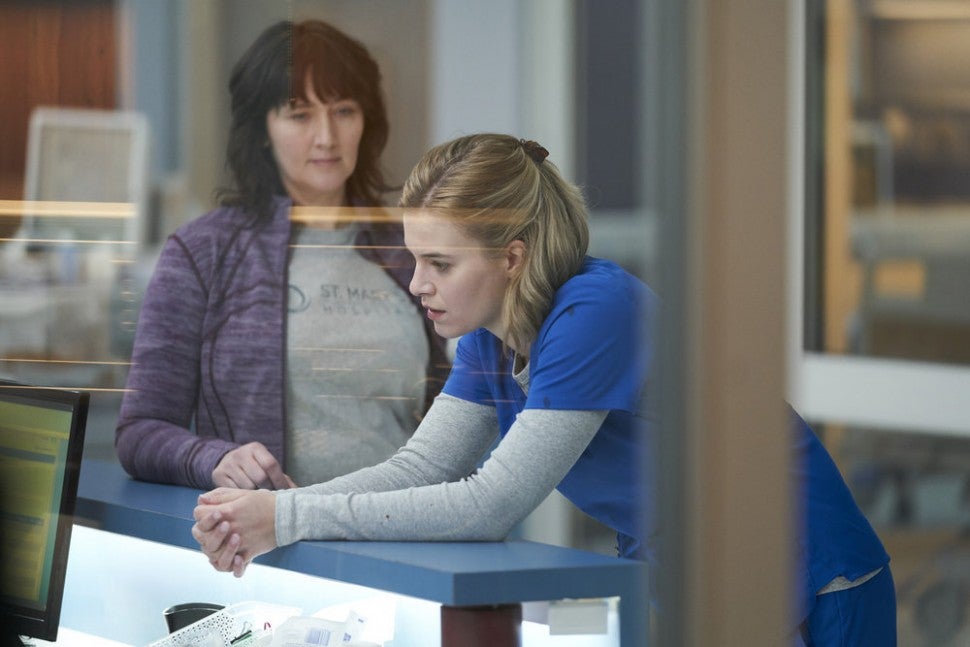 The 25-year-old actress describes her character, Grace, as “the heart” of the group, referencing the initial character breakdown she received that broke down each character in the core group as different parts of the human body to make one cohesive whole.

“For me, Grace was the heart. They described how much she cares about her patients and the people around her and how she’s willing to do anything to make sure that everybody’s OK, even if it means sacrificing her own personal life and how she wears her heart on her sleeve. But at the end of the day, the patient’s care is No. 1 and first.,” Skovbye says. “I really resonated with her fierce heart — to make sure she’s doing her job to the best of her abilities and giving these patients their best care — and how hardworking, determined she is. How she stands up for what’s right and what’s not. I admired her tenacity and her spirit and her drive to be the best she can be, despite the things that are working against her.”

What led Grace to St. Mary’s in the first place (think a #MeToo situation) threatens to derail her hopes of staying under the radar at her new home.

“Something she quickly realizes is that what she’s gone through and having to face it again now, even at this new hospital, is not something she’s going to be able to get through alone,” Skovbye says. “It takes a while and it takes some convincing, but she very much realizes that this group of nurses and these people who understand what she’s going through and live the same thing that she lives every day, are going to be the people that get her through her day-to-day life and be her backbone and her support through this terrible thing that has happened and followed her from her past.”

“Some of [the nurses] get off to a bit of a rocky start, but it’s such a wonderful thing to watch them all come into their own and take on these roles in each other’s lives of friendship and support,” she adds. “And it’s awesome because they see each other every day at work, but they’re also able to be there for each other outside of it.” 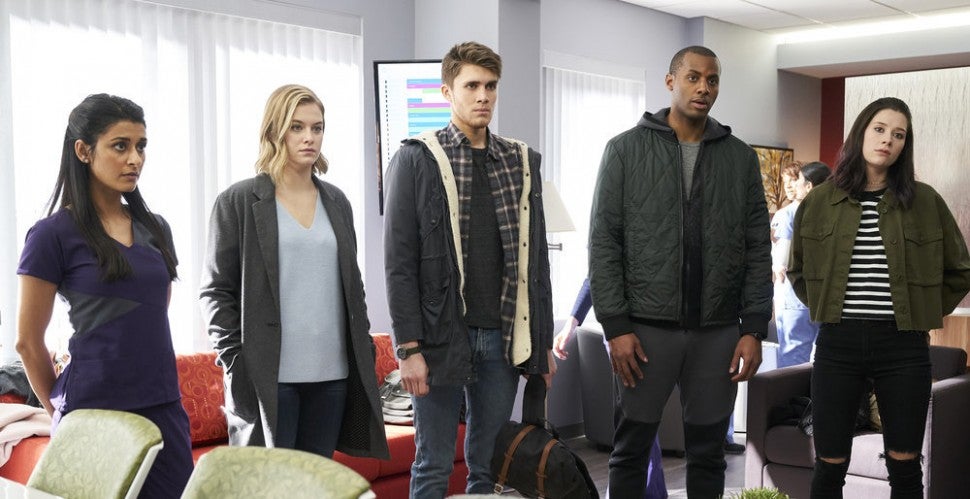 Of course, romance is very much a key part of Nurses. Right off the bat, Grace forms a close friendship with one of the good-looking doctors at the hospital, Dr. Evan Wallace (Ryan-James Hatanaka), and their flirty banter may turn into something more. Maybe.

“The way that that relationship blossoms is such a wonderful thing. The support that comes from Evan in regards to everything that Grace goes through is so incredible. He restores a bit of her faith in doctors and men in general,” Skovbye says. “Their relationship and the way that it comes to be is a really beautiful thing. Even though it doesn’t start off romantic for the first little while, I don’t think that that necessarily matters because what they developed and the advice and the care that he gives her along the way is something that she really needs at such a pivotal point in her life.”

Watch the official trailer, exclusively at ET, below.

Nurses, already picked up for a second season in Canada, premieres Monday, Dec. 7 at 10 p.m. ET/PT on NBC.

To stay up to date on breaking TV news, sign up for ET’s daily newsletter.