The show, which is confirmed to come to Hulu in early 2022, was first teased back in May after snaps of Lily, 32, and Sebastian, 39 dressed as the titular characters were released.

They replicated the iconic picture of Pamela tugging on her husband’s nipple ring with her teeth in the first look at the show, with Sebastian getting tatted up for the role.

But this is the first chance fans have had to see how the pair’s characters will translate on-screen.

Pam & Tommy will follow the pair at the peak of their fame, who married less than a week after they met in 1995.

It explores the theft and circulation of the sex tape they made during their honeymoon, which was stolen from their home. 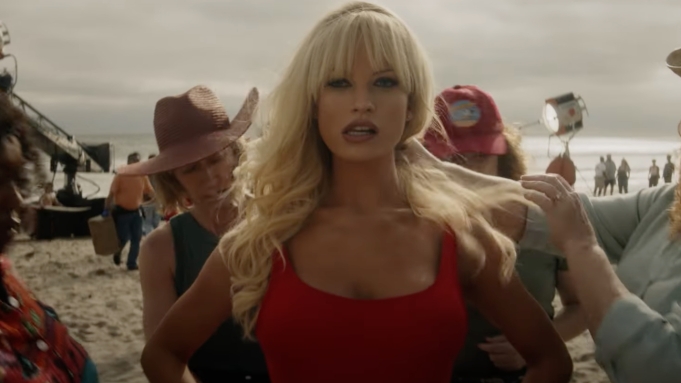 It was then circulated online before the pair sued the distributor of the tape, Internet Entertainment Group.

The trailer begins with Seth Rogen and Nick Offerman’s characters rifling through possessions stolen from Pam and Tommy’s home.

Fast-forward to a few moments later and the duo realise they’ve struck gold when they see a very ‘private’ recording of the married couple.

Offerman’s character says of the tape: ‘It’s like we’re seeing something we’re not supposed to be seeing, which is kind of what makes it so hot,’ before adding: ‘If this thing ever got out…’

Of course, fans know exactly what happened, and with the trailer promising a stream of sexy drama, it’s sure to be a TV highlight of next year.

James is even featured in her Baywatch attire going full-on Pammy, with Stan also looking the spit of the heavy metal drummer.

The teaser trailer finishes with James looking horrified as the couple see their sex tape has spread far and wide on the internet.

The show comes from the director Craig Gillespie, the brains behind the critically acclaimed film, I, Tonya.

Rogen has also exec produced the series alongside screenwriter Evan Goldberg, who he’s worked with several films in the past.