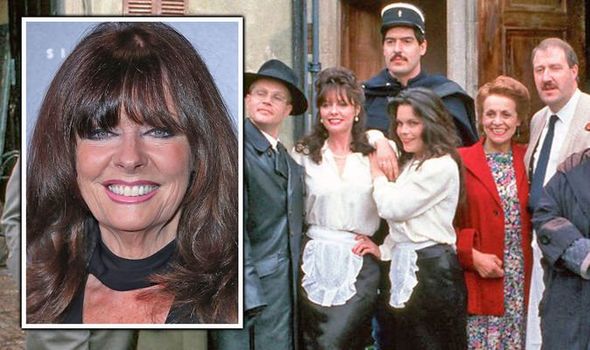 ’ALLO ’ALLO!’s sexy waitress Vicki Michelle would love to remake the comedy classic but only if the script stayed loyal to its original equal opportunities mockery – where everyone was ridiculed. The award-winning show, written by Jeremy Lloyd and David Croft and set ­during the Second World War, became an instant hit by poking fun at the English, French and Germans. “The Germans were kinky, the French were randy and the English were stupid, and that is how Jeremy and David wrote the scripts,” says Vicki, 68, who played saucy waitress Yvette Carte-Blanche over the sitcom’s ten-year run. “With less sure hands at the helm it could easily have slipped into casual racism but everyone was endearingly dim.” Vicki will join surviving cast members to mark the show’s 35th anniversary next month by unveiling a British Comedy Society blue plaque where they filmed the show.

Talks continue about reviving the show for another TV series, following news of a ­second re-boot of another comedy classic, Dad’s Army, but Vicki would commit to remaking the show only if the scripts remained true to the original.

“I still think ’Allo ’Allo! is hilarious and it’s laugh-out-loud comedy,” she says.

“I don’t think in this generation that all of a sudden we have changed our humour.

“I just think we have had to become more politically correct and people are too worried to say anything to anyone. When we did ’Allo ’Allo! we sent up everyone.” 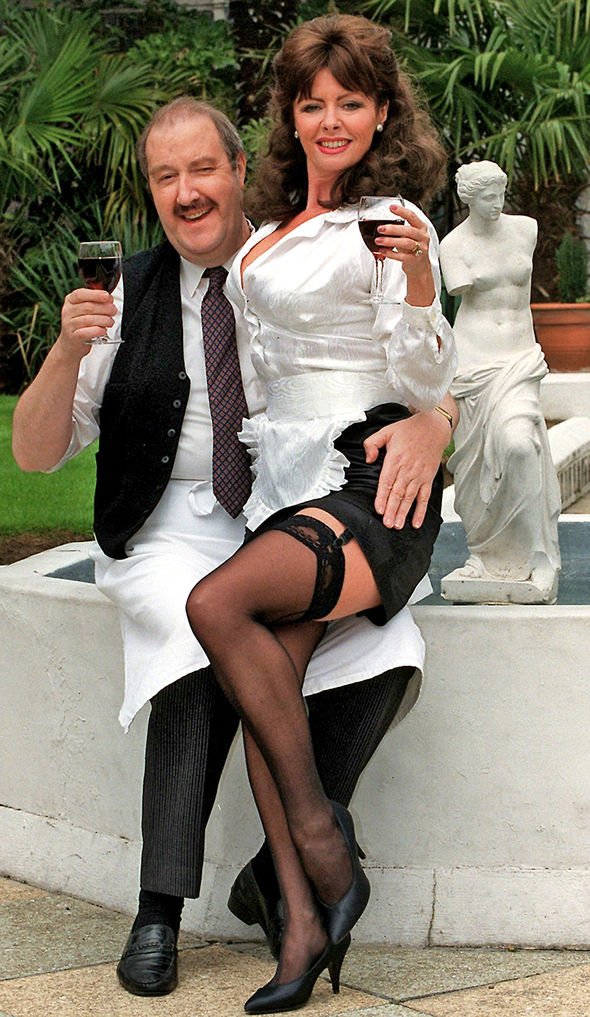 She adds: “I would only do it if I thought it was going to be as clever as the scripts that Jeremy and David produced in the first place and I don’t see how easy that would be now they are no longer alive.”

Her big fear is that TV bosses are now rather squeamish about the sort of humour that propelled the show to a weekly average of some 14 million viewers and turned its cast into stars.

“The mad thing is we are allowed to swear as much as we want, which is much worse, but we have to be ridiculously sensitive about how we portray other nationalities,” she explains. “It’s political correctness gone mad.” 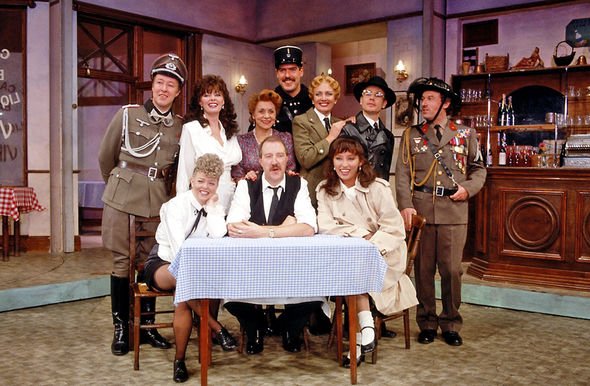 Set in a cafe in Nouvion in German-occupied France, the BBC sitcom ran from 1982 until 1992 with a total of 85 episodes.

A camp, goose-stepping assembly of odd catchphrases, saucy waitresses and a painting of a large-breasted woman, it sounds like the worst kind of kiss-me-quick humour.

But it was the brilliant writing of the veteran sitcom pairing of Lloyd and Croft – who also wrote Are You Being Served? – which ­produced the classic farce involving a plot to hide a missing painting and return two dim-witted shot-down British airmen to Blighty.

“I loved how it showed the Germans as buffoons and the Brits to be daft-as-a-brush tally-ho-types without a clue,” said Vicki. “Madame Fanny was screaming about ‘flashing knobs’ and the painting of The Fallen Madonna With The Big Boobies by ­fictional artist Van Clomp was a running joke.” 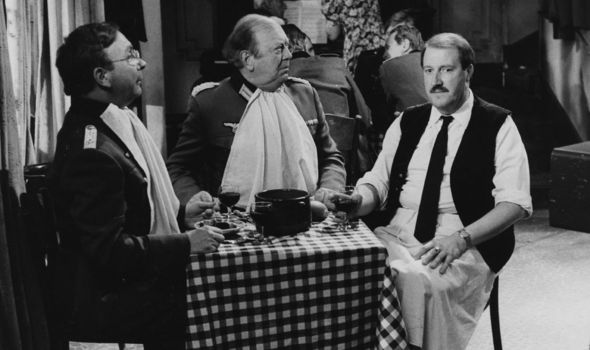 But Vicki says some of the scenes between her and Gorden were difficult because he was secretly gay.

“Well, the love scenes were awkward although we didn’t actually kiss ever,” she says.

“It was more just a hug and me sitting on Gorden’s lap. It was because he was gay and at that point, nobody ever spoke about being gay and it wasn’t something that he really wanted to come out with at the time.

“He used to try and not be close to me by sticking his bottom out but I would grab him and pull him into me. But it was never too close. After ten years of doing it, it did get a little better.

“However, he was such a brilliant actor and it was a terrible shock when he died.”

The actor endured a two-year battle with dementia and died in a nursing home in 2017 but Vicki believes that he never truly ­recovered from serious head injuries inflicted in a car accident in 1990.

“Gorden was never the same again,” she says. “We kept in touch over the phone but he lived in Huddersfield so we didn’t see one another face-to-face. I did go to his funeral and it was a very sad day. I still can’t believe he has gone.”

The British Comedy Society is unveiling a plaque at Lynford Hall, near Thetford in Norfolk – where exteriors of Café René were filmed – ahead of the anniversary of the pilot episode, which aired on December 30, 1982. 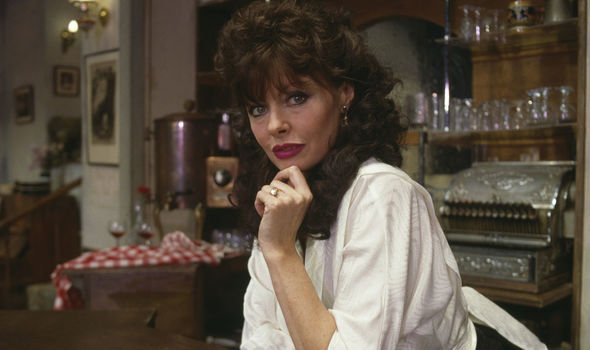 Vicki has enjoyed a long and varied career in television, theatre and film and worked with many comic heavyweights such as The Two Ronnies, Les Dawson, Sir Ken Dodd, Dick Emery and Kenny Everett.

She has also appeared in TV movies with Ray Winstone, Idris Elba and Danny Dyer as well as TV soaps, and she is no stranger to reality shows.

Having survived the jungle in I’m A Celebrity… Get Me Out Of Here, she has also cooked up a storm on Celebrity MasterChef as well as crushing grapes with Ainsley Harriott to make organic wine on Costa Del Celebrity.

And she is holding out for an invitation to appear on her favourite show – Strictly Come Dancing.

“I wanted to be a ballet dancer when I was growing up and when my dad was alive, he would do the foxtrot and lead me around. 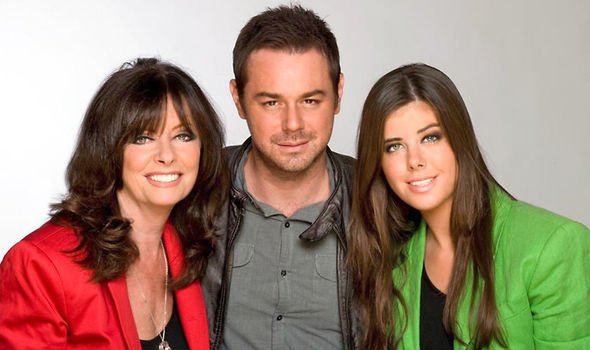 “I reckon that I would be pretty good at Strictly but the only thing is that I have not been asked.

“Apparently Strictly bosses have spent years trying to get Anneka Rice on the show. Really I wish they had done that with me.

“I am a huge fan of the show and I watch it religiously. I can see myself being partnered either with Anton Du Beke or Aljaz – both of whom I have met – or Giovanni.

“I also think Anneka will be great and a real poster girl for women of our age. It is great to have older women represented on a show like Strictly. Debbie McGee is a great mate of mine and look how well she did.” 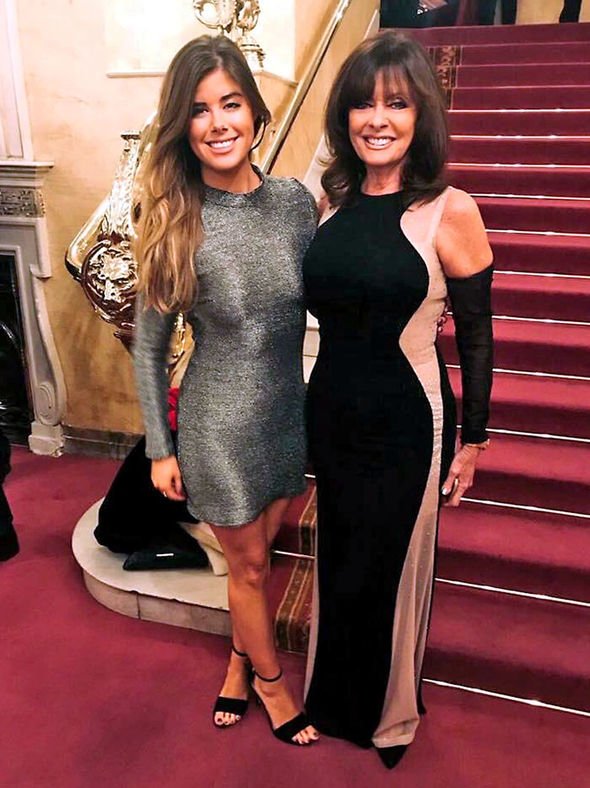 Vicki is just back from a road-trip across the Lake District with her husband of more than 40 years, Graham Fowler, and their grown-up daughter Louise.

Although she has dreams of taking part in a road-trip-style TV documentary, Vicki reveals that one coveted role would be a part on EastEnders.

She adds: “I would love to be Queen Vic of The Vic. I don’t know why anyone hasn’t thought about it before. My father was from Bow in the East End.

“It would be great to work with Danny Dyer, too. He lives locally and we are always texting each other. Ever since he did that show about being related to the Royals, I’ve called him a right royal geezer.

“I still think he could work as René if you put a moustache on him, although I am not sure about his French accent!”