Piers Morgan and Charlotte Hawkins clashed on Good Morning Britain today when the controversial presenter blamed his co-host for his own mistake. Charlotte teased Piers for inadvertently comparing the new GMB voiceover to James Earl Ray, the man who assassinated Martin Luther King. However, Piers turned on his co-host leading to the show erupting into chaos when Charlotte threw her script at him.

Piers began: “I just want to apologise to Alexander our voiceover guy because earlier I said something…”

“You compared him to the wrong person,” Susanna interjected.

Piers continued: “So I said our new voiceover sounded like a cross between James Earl Ray and Morgan Freeman which must have come as a bit of disconcerting piece of information for him. 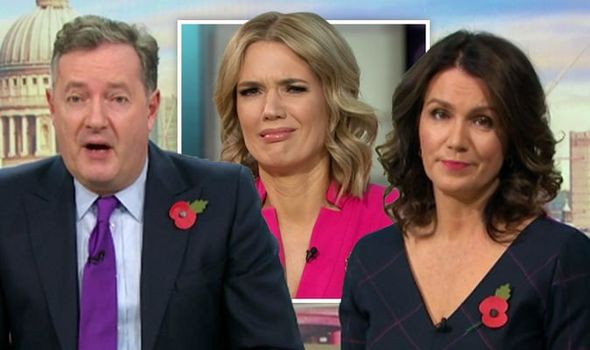 “I meant, of course, James Earl Jones who’s the guy who [did the CNN voiceover].

“That’s who I meant, James Earl Ray is the guy who assassinated Martin Luther King.”

With her head in her hands, Susanna groaned: “Oh no.”

As Eternal Flame played out in the studio, Charlotte asked: “Does that make you feel better after getting something tremendously wrong?”

“Alex, you could probably sue me but let’s just put it behind us,” Piers said.

“I did suggest we don’t draw attention to it,” Susanna revealed.

As a clip of a man in Barcelona playing the piano aired, Piers said: “When everything’s going mad, these are anti-lockdown protests and he carried on playing.

“This is like our programme, the man keeps playing even as chaos erupts.”

“Although he’s note-perfect despite everything that’s going on around him,” Charlotte quipped.

“If only you were note-perfect,” Piers swiped as Charlotte hit back: “Me? You were the one who made the mistake. You’ve just held your hands up.”

“Have you two had some sort of tiff off air?” Susanna asked. “Feels like there’s something brewing between you two. Did I miss something?”

Later, Susanna introduced an ad break as she warned her co-hosts: “You two calm down.”

When they returned, Piers said: “I don’t know what happened with Charlotte Hawkins.”

GMB viewers watched a clip of Charlotte throwing her script at Piers before admitting defeat and picking it up.

Charlotte told Piers: “You’re on one of those missions this morning to antagonise me at every moment.”

Good Morning Britain airs weekdays on ITV at 6am.