Monday night’s Q&A began with a long debate about religious freedom – which ran, if you could call it running, for roughly a quarter of the total running time.

It was launched by questioner Ruth McKie, who had apparently recovered from weeks of fasting to offer some thoughts on the election result.

Ms McKie: "Even the secular press was calling [the result] a miracle and a miracle it was. Unbeknown to them there was a massive groundswell of united prayer and fasting that went out across our nation, from small groups to the large denominations; the likes of which I have never seen in my lifetime."

Pray tell, what is that?

The analysts and the pollsters missed it: it was the starving and the prayers wot won it – even if Liberal panellist Tim Wilson didn’t really want to go there.

On Ms McKie's invocation of Israel Folau as "a catalyst" for this miracle, he offered a sensible response to the question of whether he, as a gay man, was personally offended by Folau's prayers for his damnation.

"Not in the slightest."

Tony Jones: "Is it because you don't believe in Hell?"

For those who do believe in Hell – and even some of us who don't – there was another half hour to go to replicate the experience. There was the young questioner from Queensland who proclaimed she had been abused by friends on social media because she voted for the conservative parties.

She had voted for them because "Labor Party policies were going to completely threaten my financial position and that of my family".

We were left none the wiser, but we could take the abuse to the bank. Everyone on the panel was suitably appalled and horrified. 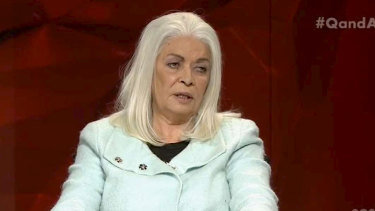 Marcia Langton saved the night with careful thoughts on Indigenous recognition and the rise of anti-Semitism. Credit:ABC

Indeed, such was the horror that Paul Kelly was on hand to lament the decline in political discourse: "Well, there's far too much bullying and personal attacks in our political debate and a lot of that comes off social media."

Alas, this was not the Paul Kelly who does a lovely cover of Puff The Magic Dragon among other nice things. It’s the Paul Kelly who is Editor At Large of The Australian and who evidently doesn’t read his own newspaper, the well-known bastion of national civility.

For added spice, we had the rough questioning of Tim Wilson by audience member Michael Tiyce. "You were accused of running a scare campaign regarding the retiree tax. First, what do you think of that allegation, and second how important do you consider the public opposition to the tax proved to be for the government's re-election?"

Wilson tried not to dance at the sheer brutality of the inquiry, before acknowledging that he and Tiyce were "Facebook friends". Not mentioned: Tiyce is also president of the East Sydney branch of the Liberal Party.

Thanks for coming, Michael.

It fell to to academic Marcia Langton to save the night, bringing her careful thoughts to questions of Indigenous recognition, and the rise of anti-Semitism. She spoke of the incivility of debate – and this incivility rang more true to a discussion about modern Australia than the first 18 minutes of discussing Israel Folau's views ever could.

Of the nature of a question to be put to a referendum, she said: "What we need to do I think first is to bring enough people along on the logic of the proposition before we are drowned in the typical incivility of debate about indigenous affairs, lies told, exaggerations made.

"I think strangely enough, ironically enough we have an opportunity to persuade people of the logic of this proposition and to take away the fear. There’s this nonsense question out there, 'If Aborigines are going to be in the constitution, what about me? Why don't I get mentioned in the constitution?' So, you know, what most people don't understand is that the constitution is supposed to be for all Australians … we are the gaping hole in the heart of the constitution."

And then came the final question, about the rise of anti-Semitism – for which the room went silent as Langton spoke from the heart about threats to religious freedom that are of real-world relevance.

Taking on the behaviour of Pauline Hanson and Fraser Anning – of "It’s OK to be white" resolution fame – Langton tore into those who let it happen.

"This filth is in our parliament," she said.

In short: You want to see incivility? Let me show you real incivility.

It was a calm, eloquent and blistering call to action.

Or perhaps we could just fast and pray.