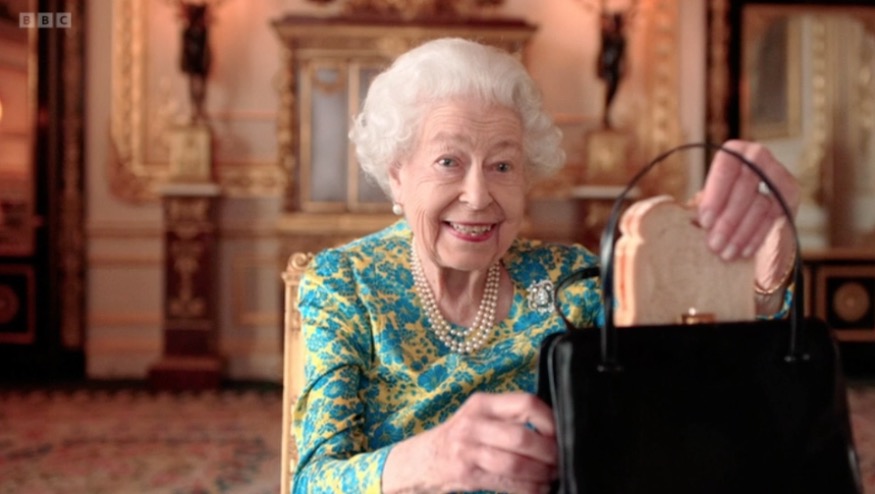 Tonight, a star-studded concert is being held in Queen Elizabeth II’s honour outside Buckingham Palace to celebrate her Platinum Jubilee, boasting performers from Queen to Eurovision’s Sam Ryder.

However, the Queen was the undisputed star of the show when the concert began, starring in a pre-recorded skit with none other than Paddington Bear.

The monarch does have experience with showing off her acting skills, having appeared in a James Bond sequence for the London 2012 Olympics opening ceremony.

A decade later, and she’s still just as comfortable in front of the camera, sitting down for some afternoon tea with the beloved animated bear – and people watching the programme at home absolutely loved the cute interaction.

At one point, Paddington accidentally splattered some food on a butler’s face, before revealing he had a marmalade sandwich stashed away for safekeeping.

The Queen then did one better, unclasping her handbag on the table to reveal she had a sandwich of her own.

The first artist to perform on stage for the Jubilee concert was Queen, with Adam Lambert singing as lead in place of the late Freddie Mercury.

As the music began, the Queen and Paddington tapped their cutlery in time with the music.

People on Twitter couldn’t get over the pair’s unexpected scene, with one writing: ‘Omg paddington with the queen…… so cute.’

‘I literally hate living here but watching the literal Queen interact with Paddington is making me cheese a little bit LMAOO it’s cute!’ someone else remarked.

Dust off your Union Jack bunting, Queen Elizabeth II’s Platinum Jubilee is well and truly upon us.

Taking place from Thursday, June 2, to Sunday, June 5, the celebrations mark Her Majesty’s record-breaking 70th year on the throne.

Across the UK, there will be street parties, concerts, and other special events attended by the Queen and senior members of the Royal Family.

Visit Metro.co.uk’s Platinum Jubilee page for all the latest updates.