Remembering dozens of complicated names is never easy. So in front of 2000 people at Sydney's grandest theatre – having rushed all day between Sydney Film Festival sessions – how do you make sure you introduce Thailand's Apichatpong Weerasethakul correctly on stage? Or Brazil's Kleber Mendonca Filho? Or Japan's Hiroshi Okuyama?

Festival director Nashen Moodley has a secret that he reveals over lunch just a minute's walk from the venerable State Theatre. In fact, he has a few secrets to reveal but the first one is that, out of sheer terror of repeating John Travolta's befuddled introduction of Frozen singer Idina Menzel as "Adele Dazeem" at the Oscars five years ago, Moodley carefully writes the name of each filmmaker and film he is about to introduce on a small card and keeps it in his coat pocket when he heads on stage. 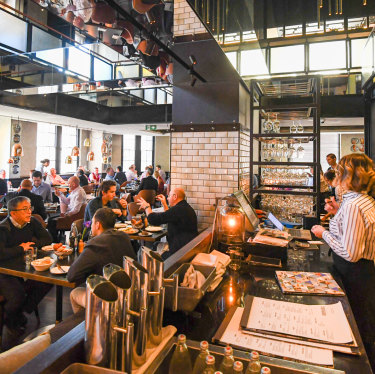 "I once saw such an incident go down very badly at an international festival where one of the programmers said 'we're so delighted to present the world premiere of this film by a really important director and it's a fantastic film'," Moodley says. Then the programmer went so blank that he had to first ask the director the title of the film then, even worse, the director's name.

"It's never happened to me because I never want it to happen to me," Moodley says. "So even if people don't see it, I always have in my top left pocket just the title of the film and the name of the person I'm introducing. Even if it's someone you know very well and they're one of your favourite filmmakers, I think the fact that you have it prevents the panic that could make you forget it."

As his dapper appearance and the fact he writes these names on a particular brand of card that he buys in Tokyo indicate, Moodley is a precise person, which must be necessary when compiling an event that includes more than 250 films in nine venues over 12 days.

So he arrives precisely on time for lunch at Gowings Bar and Grill, where he often takes filmmakers for dinner between introducing their sessions at the State and returning for a Q&A. "It's a lively buzzing place," he says. "It feels like a very Sydney place in a way."

In what sounds very much like a dream job, Moodley spends three to four months a year watching films at glamorous locations including Sundance in Utah, Rotterdam, Berlin, Venice, Paris, Toronto and Busan in South Korea to assemble the program. He also attends up to three other festivals as a competition jury member. 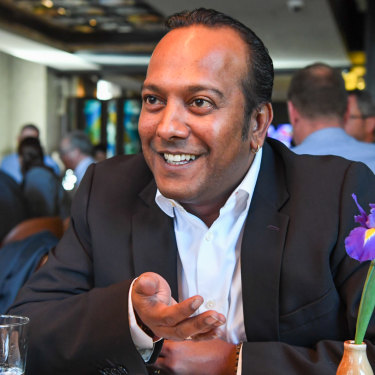 "I don't like it when festival directors are treated like some sort of gods": Nashen Moodley, director of the Sydney Film Festival. Credit:Peter Rae

The downside is being away from home for weeks for screenings that run from breakfast till after midnight. But Moodley recognises he gets little sympathy – actually none – if he describes it as gruelling work at times.

As a child, it's hard to know that other people who don't look like you even exist.

Moodley's first experience of watching movies was very different: growing in up Durban in South Africa, his mother would take him to segregated cinemas during the apartheid era. His late father was an internal auditor who loved sport – Moodley also loves the game and once fancied himself as a crack legspinner – and his mother ran a dressmaking business and loved cowboy movies.

Being of Indian heritage, the families of both his parents were evicted from their homes to a segregated middle-class neighbourhood but Moodley has little memory of overt racism.

"It sounds like quite an odd thing to say but at the time you don't realise that it's anything unusual because it's quite a complete segregation," he says. "As a child, it's hard to know that other people who don't look like you even exist. You're placed in your neighbourhood, you go to an Indian school then you go to an Indian cinema. It's only when you grow slightly older that you realise there's something really messed up about this society."

Moodley says the horror of apartheid became apparent when he was in high school. "It was really such a vile system, a very efficient system in a way because aside from oppressing people, it also set people against each other."

After apartheid gave way to the first democratic elections in 1994, Moodley majored in English literature and philosophy at university after dropping out of law. Having worked for a student newspaper, he landed a job in journalism. 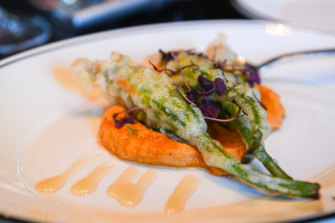 A keen patron at the Durban Film Festival, he was called in for an interview to write and edit the catalogue when the program director left suddenly but told the organisers he could do the whole job. "I'd never done it before but I was 23 and you know more than everyone, you're smarter than everyone and you can do everything," he says. "I think they were in such desperation that they said 'OK, do it'."

What started as part-time turned into a full-time job as the festival grew.

Eight years ago, Moodley's first visit to Australia was to be interviewed for the Sydney Film Festival job. It has gone so well that his contract has just been renewed for another four years.

"The first time I was on a yacht in Cannes, I was like 'what the f— am I doing here?'." he says. "'Why? How?' A lot of people probably feel that way about how things work out. But we shouldn't believe that we don't belong. We can marvel at the strange circuitous route to that spot but if you're good at what you do, you shouldn't question 'why am I here?'"

After entrees – buffalo ricotta and pecorino-filled zucchini blossoms and Hawkesbury calamari fritti to share, with a bottle of Dal Zotto's King Valley barbera suggested by the Italian waitress – Moodley gets a text then apologetically leaves to make a call. He returns beaming about – finally – getting a closing night film. It's Danny Boyle's Yesterday, a comedy about an Indian-English musician who is the only person in the world who knows the Beatles' songs.

"It's absolutely fantastic," he says. "The weird thing is that it got mild reviews from American critics but if you read the British reviews, they're all hysterically positive. I think it's the best year ever for music films." 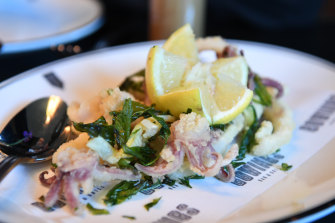 Then come another couple of secrets, at least outside Moodley's circle of friends. After last year's festival, he married an Australian, Belinda Davis, who was on the festival's guests team when they met and now works for a film sales company. And he has become an Australian citizen.

While his wife was at the Cannes Film Festival, Moodley voted in the federal election and, disappointed there was no sausage sizzle at the polling booth, cooked his own at home for an authentic experience of Australian democracy.

As the main course arrives – Moodley, who loves eating out and cooking, has gone for a minute steak; I've gone for the waitress' recommendation of barbecued seafood – it's time for more festival director secrets.

What's the key to gracefully introducing so many films and keeping the audience on side?

"I'm a conduit," Moodley says. "I want to provide as little barrier between the person sitting there waiting to watch the film and the film. I don't like it when festival directors are treated like some sort of gods. They didn't make the film; they just chose the film."

What's the absolute worst film he has ever watched?

"I've seen hundreds of films like that," he says. "To rank them is not possible but hundreds. With technology, there's been an amazing democratisation and more and more films are being made around the world. But at the same time, there are more and more people who are not necessarily filmmakers making films." 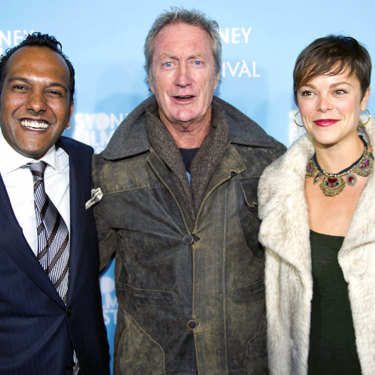 How does he handle filmmakers who are angry their film has not been selected?

"As kindly as I can," he says. "It's quite difficult for independent cinema all over the world. That means for particular films, festival selection becomes all the more important and I completely understand that.

"But at the same time, what we do is a selection that's informed by many different factors – personal taste, what we like to deliver to the audience, what the overall mix is, a geographical mix, a diversity of styles. So there are many films that we really like that don't get into the festival. It's inevitable. But I don't think there's any point in pointing out the film's flaws as a justification for it not being selected. I don't think that's in any way helpful."

Moodley has enjoyed the steak but can't finish it. Without us realising, the once buzzing restaurant is empty now except for staff whose labours at nearby tables are subtly indicating that it's time to leave. Time for one last question over coffee.

Who's the worst ever festival guest?

Moodley laughs and tries to duck the question until pressed.

"I have one in mind but it would take us until dinner to go through a blow by blow account of the visit," he says. "But they did ask after I met them 'is the prime minister coming to the film tonight? And the cabinet?' I said 'not that I'm aware'. 'But did you invite them?'

'Not individually no, but they'd be very welcome.' 'Get me their numbers now'. That was day one.

"But in the end, it was a great screening of the film. The prime minister and the cabinet were not there. But the audience really liked the film." 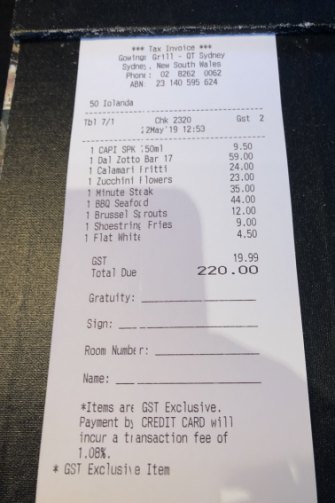 The bill please: Moodley and journalist Garry Maddox dined at Gowings Grill at the QT in Sydney.