“Are you going to Sundance?” The question is a post-New Year’s tradition, but this year it’s tinged with more skepticism than cordiality. With omicron throwing a new variable into the puzzle of pandemic-era disruption, the prospects of any large-scale physical gathering in January — much less one attended by over 100,000 people dedicated to packing into box-like rooms for hours at a time — sounds like a fever dream.

The Palm Springs International Film Festival, originally scheduled to begin this week, is canceled. The January 9 Critics Choice Awards are postponed. The format of next month’s Berlinale remains uncertain. At this writing, Sundance still intends to hold its physical gathering at the end of the month. And, based on multiple conversations with IndieWire, distributors, sales agents, and publicists confirmed that they had no immediate plans to change their intentions of attending unless Sundance itself canceled the physical event.

“We remain committed to providing the safest possible environment for the 2022 Sundance Film Festival,” a festival representative wrote me via email today. “We are working thoughtfully and quickly to assess the public health situation in Utah, speaking with our partners in Summit County, and others critical to producing the in-person experience.” She referred our readers to the festival’s page for safety updates.

Despite the success of Sundance’s forward-thinking virtual edition in 2021, the physical edition of the festival remains a far more attractive destination for sponsors. (Full disclosure: The IndieWire Studio on Main Street is currently booking in-person talent with COVID protocols in place.) Sales agents and publicists say they are eager to return to the exclusivity of physical Sundance premieres, where they can monitor buyer and press attendance before cornering them in the lobby for screening reactions. Filmmakers and actors still dream of their breakout moments at the fabled Park City gathering.

Sundance took a page from previously canceled festivals, from SXSW to Cannes: The fate lies in the hands of elected officials. The Austin event canceled in 2020 following a decree by the city’s mayor, not the festival itself. Likewise, Cannes canceled its 2020 event after France banned gatherings of 200 people or more.

Last month, Sundance sent a document sent to the festival’s corporate partners that acknowledged the omicron variant but said its position remained unchanged: “Our plan for now is to host a hybrid Festival (online and in person), unless there is a government mandate for lockdown.”

The Administration has made a concerted effort to avoid widespread shutdowns: “We should all be concerned about omicron, but not panicked,” President Joe Biden said December 21. “It is not March of 2020.” That statement referred in part to the widespread vaccination of Americans, and evidence that, if infected, anyone fully vaccinated faces a low risk of hospitalization or death. Local government is unlikely to intervene: Last March, Utah Governor Spencer J. Cox signed a bill prohibiting state agencies from requiring people to receive a COVID-19 vaccine as a condition of employment. (The bill does not include medical settings.)

The festival has higher safety protocols: A Sundance badge requires two vaccinations plus a booster. Attendees must “submit a negative test result within 48 hours prior to arrival or upon arrival, along with a requirement to test negative within 48 hours prior to attending some official festival events such as Q&As, press lines, and private receptions.” The festival also announced that its screenings will have reduced capacities, with no food and drink permitted.

“As we adjust to the ever changing health situation and a return to participating in arts and culture in person, we’re working to provide a safe experience while still fulfilling our mission of supporting artists and bringing audiences together,” Sundance’s rep wrote me. “From the beginning we have put in place rigorous protocols, including a required proof of vaccination and a booster if eligible, providing COVID-19 testing and screening, capacity limitations, and mask mandates.” 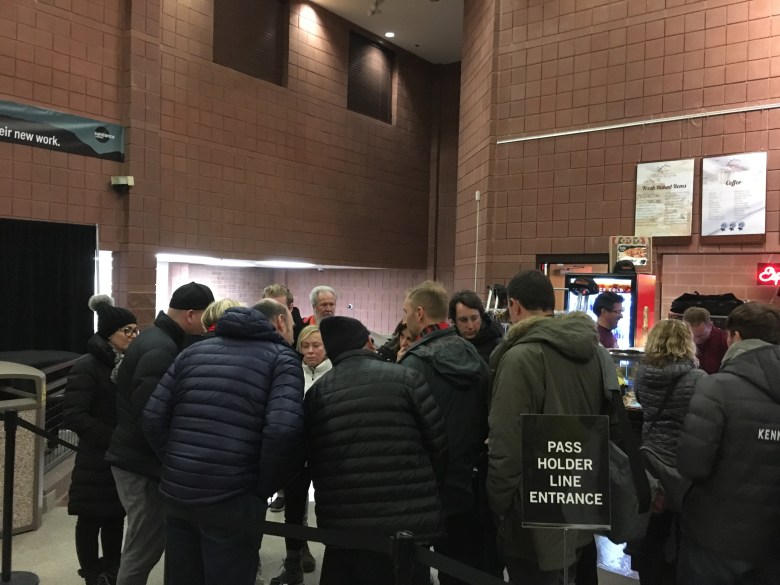 However, that doesn’t prevent accredited festival attendees from circulating with unvaccinated locals. Park City is located in Summit County, the state’s covid hotspot. With a current average of 145 cases per day, January 3 spiked to 615 new cases.

Sundance has scheduled virtual tutorials this week for navigating the festival and the logistical challenges of ongoing testing. Antigen test results are expected within 15-30 minutes, while PCR test results range from eight to 16 hours. However, those estimates do not account for waiting in line, or the potential for backlogs: There are three testing sites for the public and three more sites dedicated to Sundance artists, employees and volunteers. Hours generally range from 8am to 11pm.

The state of Utah requires people who test positive to isolate for a minimum of five days. “We have a very detailed plan for our employees and volunteers for providing care for them if they test positive, including alternative lodging,” Sundance’s rep said. “We recommend anyone traveling to the Festival to be thoughtful in respect to their plans if they test positive.”

Last July’s Cannes Film Festival, which took place on the cusp of the global outbreak of the Delta variant, attendees had to show a negative result from a 48-hour antigen test in the absence of vaccination proof. to ether the Palais des Festival headquarters. (Americans, whose vaccination cards were not accepted at the festival due to the lack of QR code, had no choice but to get regularly tested within that two-day window.)

In the fall, Telluride and TIFF took place with reduced-capacity screenings as well as vaccine requirements. Telluride faced  anecdotal reports of attendees contracting the virus, while TIFF reported one positive case at one of its venues.

This time around, part of the Sundance hesitancy stems from the uncertainty around the highly contagious omicron. While there is speculation that the infection rate in the U.S. could soon subside, as it has in South Africa, on January 3 the U.S. set a global daily record of over 1 million new cases. Omicron has a track record of bypassing vaccines and causing illness, even if it doesn’t require hospitalization.

Some regulars welcome the capacity for Sundance to take place under any circumstances. “I can’t wait to go,” said one prominent agent via text on Monday. “I miss it.” Another agent said the room for flexible standards was key. “At this point it’s really about individuals and their comfort levels,” he said.

As rewarding as it is to watch an overnight talent emerge at an Eccles premiere, a key aspect of Sundance ecosystem (not to mention its lore) stems from its relentless social climate. “If a movie is hot, it’s a constant flow of people in and out of condos for days straight,” one buyer warned.

Then there’s the parties. Sales outfit Cinetic still has a hold on the High West Saloon, where the company hosts its legendary Sundance soiree. (A staffer admitted they were reconsidering the format of the event.) Even if the festival puts the kibosh on large official gatherings, it will have no way to monitor the countless unofficial ones that take place at condos around town and neighboring Deer Valley. Inevitably, there will be outbreaks.

When attendees do test positive, new logistical questions arise. COVID-afflicted Sundancers can’t fly home; even after symptoms subside, the CDC requires a five-day quarantine period. Do they quarantine at their condos, relying on roommates to bring food while hoping their presence doesn’t infect others? Do they take on the additional expense of a hotel? (Also noted: Being sick in a city not your own.) 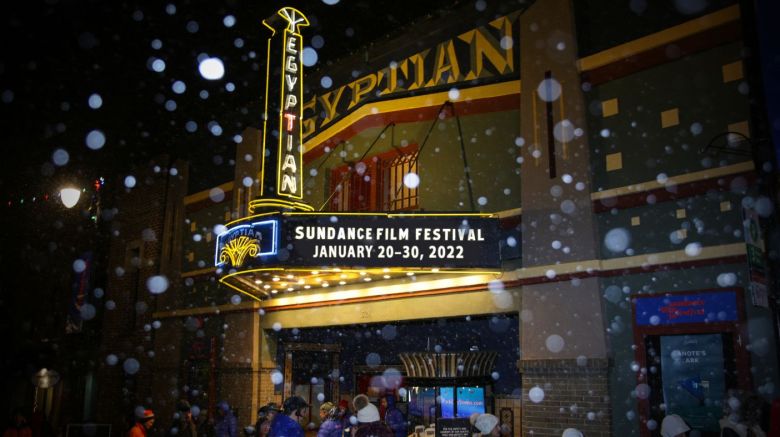 In the process of considering these scenarios, more than one festival regular joked that even in pre-COVID times, who hasn’t gotten sick at Sundance? This time, the laugh catches in your throat. As the parent to an eight-week-old unvaccinated infant, my own indefatigable spirit of commitment to attending the festival has been less than resolute of late.

There remains an upside: Sundance could take place for those comfortable with the risk, while allowing others to have much of the same experience in virtual terms. Last year, Sundance developed an effective player with help from streaming service Shift72, and built a remarkable 3D virtual space with Active Theory for online socializing through its New Frontier section. The festival reported a total audience of 600,000, a 168 percent increase from 2020.

Of course, these figures don’t tell the full story of the Sundance effect. The festival has thrived on exclusivity and a smaller audience to gauge the impact of films before taking them to the wider market. In the 2021 virtual edition, the festival made films available to home viewers in four-hour windows, which allowed sales agents to carefully monitor reactions. This year, the window is more diffuse — up to 48 hours — with in-person screenings taking place first.

What this means is, all hype aside, Sundance’s value for the industry revolves around the screenings, and many in the industry see that aspect of the festival as manageable even under present circumstances. There is already talk of pop-up screenings in New York and Los Angeles to maintain some measure of exclusivity for people who don’t travel to Park City. However, it is possible to envision a scenario where, much like TIFF in September, Sundance’s hybrid format results in a quieter presence on the ground with few events between screenings.

All of this is happening against the celebration of the 30th anniversary of Sundance’s legendary 1992 edition, when the lineup contained everything from “Reservoir Dogs” to “Gas, Food, Lodging,” “The Living End,” “Swoon,” and “Night on Earth.” (A new Criterion Channel series is currently presenting many of these films.)

When market-driven hype threatened to overshadow Sundance itself in the years since then, the festival has fought to reclaim its identity as a launchpad for bold filmmaking, not just big dealmaking.

This year, Sundance may wind up with a smaller footprint that’s more likely to engender its original spirit. Another possibility: Adapt-or-die conditions might force the the Sundance DNA to evolve into the national brand it’s always wanted to be. There is one documentary in this year’s lineup with a title that points to the future, if not present, circumstances: “We Met in Virtual Reality.”