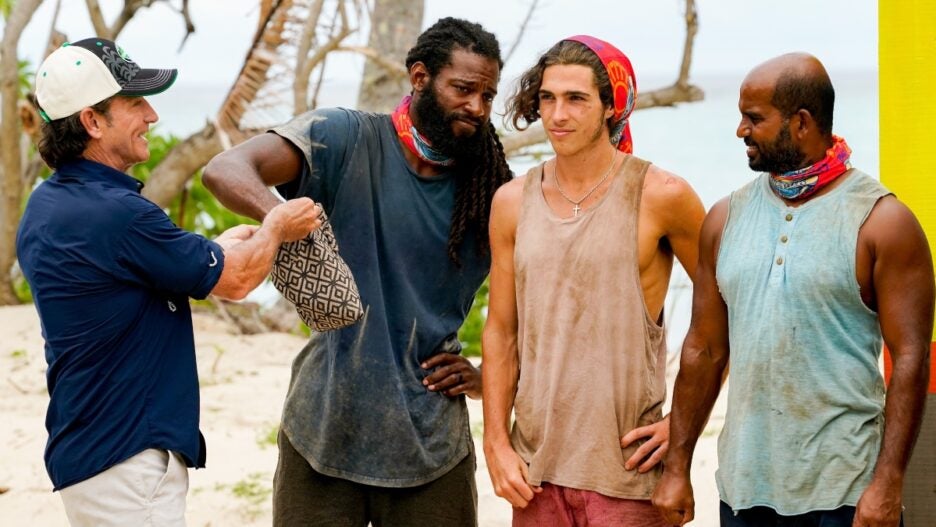 Spoiler alert! Proceed with extreme caution if you have not yet watched Episode 9 of “Survivor” Season 41

“Survivor” Season 41, Episode 9 will and should be looked back upon as the episode when the rubber finally hit the road. In a season unusually lacking in the outsized personalities and amateurish drama that typically characterizes the show, it was a slow climb to that tipping point where everyone starts playing hard. Finally, we’ve reached the top of the mountain – or the roller coaster, to borrow Evvie’s nifty analogy – and boy, is the view glorious.

Last week, former background player Heather turned heads when she stirred up panic at tribal. Even though Tiffany went home, leaving Xander and Evvie more on the bottom than ever, something seemed to come loose in the airtight majority of Shan, DeShawn, Danny and Liana.

But just in case, the gods intervened yet again by combining the immunity and reward challenges, leaving time for two separate tribal councils. That’s right, not one, but two castaways found themselves on the chopping block this episode, expediting an already truncated season.

Clearly, “Survivor” 41 is on the fast track to final tribal council, so without further ado, let’s bring you up to speed.

“There were fireworks here on our beach”

As DeShawn nicely summarizes, “Tribal council was absolutely a train wreck.” Everyone’s fingers point every which way as they try to untangle the mess that just went down – except for Xander and Evvie, who can’t help but enjoy having the target shifted elsewhere for once.

DeShawn, in particular, is on the warpath. First, he chastises Heather for speaking up, then confronts Danny about never sticking up to Shan, who’s been calling all the shots so far. Shan trashes DeShawn for being “immature.” It’s enough for him to turn to Evvie, who happily comments on the “fireworks here on our beach.” They’re right when they say “Chaos doesn’t help the people in power, chaos helps the bottom people”; if DeShawn is truly ready to walk away from his Core Four alliance, this could trigger a seismic shift in power.

Let’s not get ahead of ourselves, though. DeShawn talks a big game, but he has yet to follow through with his vague threats to join “a new team.” The next morning, he and Shan have a heart to heart on the beach. “I don’t wanna seem like I’m the one who calls all the shots,” she says. It would probably be wise if she started taking her own advice; moments later, she’s already gunning for Erika, and pushing an exasperated DeShawn further into Evvie’s welcoming arms.

Meanwhile, Heather is caught in her own lie about writing Naseer’s name down. After the chaos she caused at the tribal, we hoped she’d be a tiny bit more savvy than before.

Shan, proving DeShawn’s assessment that she has “very little tact,” calls the Core Four over for a scheming session in front of everyone else. For some reason, she’s still pushing for Erika to go home. Besides using the turn-back-the-clock advantage a few episodes in order to avoid going home, she hasn’t done much to earn the adjective “mastermind,” but Shan won’t be talked down.

Jeff and the powers that be shock the castaways when they roll the reward and immunity challenges into one. The twist is that two players will win immunity, and the last one standing wins a reward of delicious meat stew for their challenge team. This also means that alliances will be randomly split up into two tribal councils, with one player voted out at each.

This week’s challenge is a classic test of endurance: each player stands against a wooden cross and must hold onto the handles behind them until their arms give out. In a moment so perfect it seems written in the stars, local Jesus lookalike Xander is the last man standing (and he’s wearing a cross around his neck! Come on).

Erika wins the other immunity necklace, throwing a massive wrench in Shan’s plan to split the vote between her and Xander. That leaves Shan, Ricard, Naseer, and Heather to battle it out at one tribal and Evvie, Liana, Danny and DeShawn at the other.

Back at Viakana, Evvie, Liana, Danny and DeShawn and Xander enjoy the stew he won for them, but he’s the only person truly enjoying it. Evvie feels secure enough in their alliance with Xander to propose taking out, as Xander calls her, “Shan’s minion” AKA Liana.

Danny and Liana make it clear that they’ll be writing Evvie’s name down, making DeShawn a potential double agent. In a highly satisfying moment, Liana asks if Xander would play his idol for her – despite gunning for him all season – and he simply says no. “Liana has shown her cards and I’m ready to expose them,” he tells the camera coolly.

Over at Ua, out-of-nowhere besties Heather and Erika go to “pick some limes,” leaving Shan, Ricard and Naseer to talk strategy. Naseer, confident in his alliance with Shan and Ricard, plus his two advantages, tells Heather she’s going home to her face. Meanwhile, Heather and Erika discuss getting rid of Naseer by throwing out Heather’s name as a smokescreen.

Later, Ricard and Shan fall back into their old patterns when she demands that they get rid of Heather. Ricard counters that Naseer is the obvious move – Heather doesn’t have a single advantage to her name, and Shan is being short-sighted. It was refreshing to see him put his foot down and ask Shan to use her extra vote for good measure. Shan has always been lauded as a dangerous strategic player, but now I’m not so sure.

At the first tribal council, Heather lays it on thick in an effort to make Naseer feel extra safe. “I just hope there’s an idol, cue the idol,” she practically shouts to the wind.

Shan doesn’t help much by throwing out a phony “I don’t even know if I’m safe.”

But then, out of nowhere, inspiration rains down from the heavens and Heather pivots into an Oscar-worthy performance — hands on face, sad musings about the struggles of being an older player, and even real tears! Quit “Survivor” and get an agent, Heather!

When the votes are tallied, it’s a tie between Heather and Naseer, meaning that Shan must have used her extra vote. A revote settles it: Naseer is going home. Or, more accurately, to the other side of the hut to the jury bench, where someone from the second tribal council will soon join him. To his credit, he’s a gracious loser and tells the camera he enjoyed every moment of his “Survivor” journey.

The members of the second tribal play their cards close to their chest. Some prodding from Jeff reveals that everyone is feeling pretty comfortable in their positions, which, as DeShawn says, means “someone lied to someone. I think we’re gonna find out who’s who in the zoo.”

And find out they do. Evvie receives one more vote from Liana, meaning that DeShawn turned on their fledgling alliance. Xander, playing it cool but looking slightly stunned, is now officially on his own.

A surprised Evvie picks up their torch and gives the camera a final message: “Any queer kids out there, be yourself, you’re amazing, love yourself.”

The most obvious winner of this episode was Xander, for once again hanging on to his spot in the game by the skin of his teeth. But the biggest winner was Ricard, for successfully maneuvering Shan to his side.

For once, there were truly no snoozers this episode! In a lovely turn of events, everyone was playing hard and playing to win.

Although Naseer wasn’t the only one voted out this week, he emerges as the biggest loser for going home with advantages in his pocket. Evvie, who I will personally miss dearly, is the lesser loser for surviving so long on the bottom.

Quote of the Week

“I woke up at the bottom, now I’m the prom king” – Xander (channeling Drake?) after winning immunity