NBCU, Discovery and ViacomCBS are unhappy with how their channels are offered 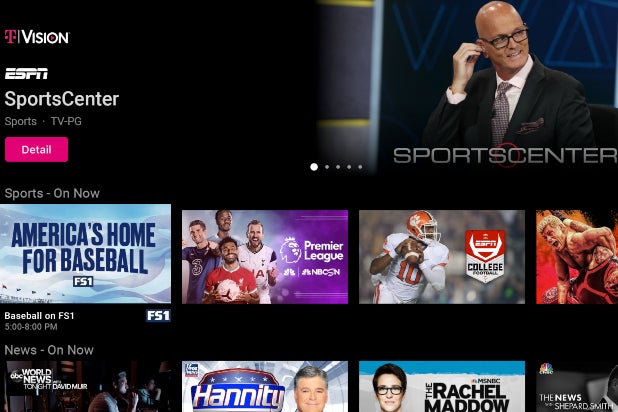 ViacomCBS’ concerns with TVision are similar to Discovery’s issues, which center around how their networks are being packaged on the platform, an individual familiar with the matter told TheWrap. Another individual familiar with NBCUniversal’s discussions shared similar concerns, arguing its contract requires T-Mobile to distribute both owned-and-operated NBC and Telemundo stations, as well as local NBC affiliates across to all TVision customers.

T-Mobile rolled out TVision last month, following years of rumors that it was getting into the streaming game. The service comes in two forms: TVision Live, which has three tiers of service, and TVision Vibe, a much more slimmed down and cheaper option.

T-Mobile told TheWrap that it is “complying with our content agreements” and is “open to evolving our services.”

TVision Live offers a bundle of broadcast and cable networks for anywhere between $40-$60. Additionally, subs can add premium networks, such as Starz, Showtime and Epix, starting at $5.99 per month. TVision Vibe, which runs for only $10 a month, features around 30 cable channels and is the one that appears to be drawing the ire of media companies.

In Discovery’s case, the fact that Vibe doesn’t offer all Discovery networks violates their agreement, Zaslav argues. In NBCU’s case, NBC and Telemundo stations being off Vibe is in breach of their carriage agreement, the individual said. Like Discovery, ViacomCBS and NBCU are working to rectify the situation with T-Mobile.

“We were very surprised with how T-Mobile decided that they were going to bundle our networks, particularly because we have a clear agreement where our networks are required to be carried on all their basic tiers, OTT offers,” Zaslav said Thursday morning during a call to discuss the company’s third quarter earnings. “So, let’s just characterize it this way: We’re in active discussions with them to quickly resolve that issue. We don’t believe they have a right to do what they’re doing right now. And they know- it’s very clear to them and they’re focused on it.”