Teen Mom 2 critics have gone after Jade Cline for being a “moron” after she posted a picture to her Instagram stories that showed a handgun laying on the passenger seat of her car.

Many were outraged by the photo and concerned that Jade would leave something so dangerous in a place where her daughter, Kloie could easily access it.  Jade shares Kloie with her boyfriend, Sean Austin.

The photo included a dog, a purse, and a handgun.  Jade captioned the post, “Obsessed with you (not my dog lol)”

According to The Sun, fans posted to Reddit to share their opinions, and most of them thought it was an irresponsible risk to take.

One critic commented, “Holy s**t what an absolute moron.”

The post was deleted by Jade following the criticism she received. 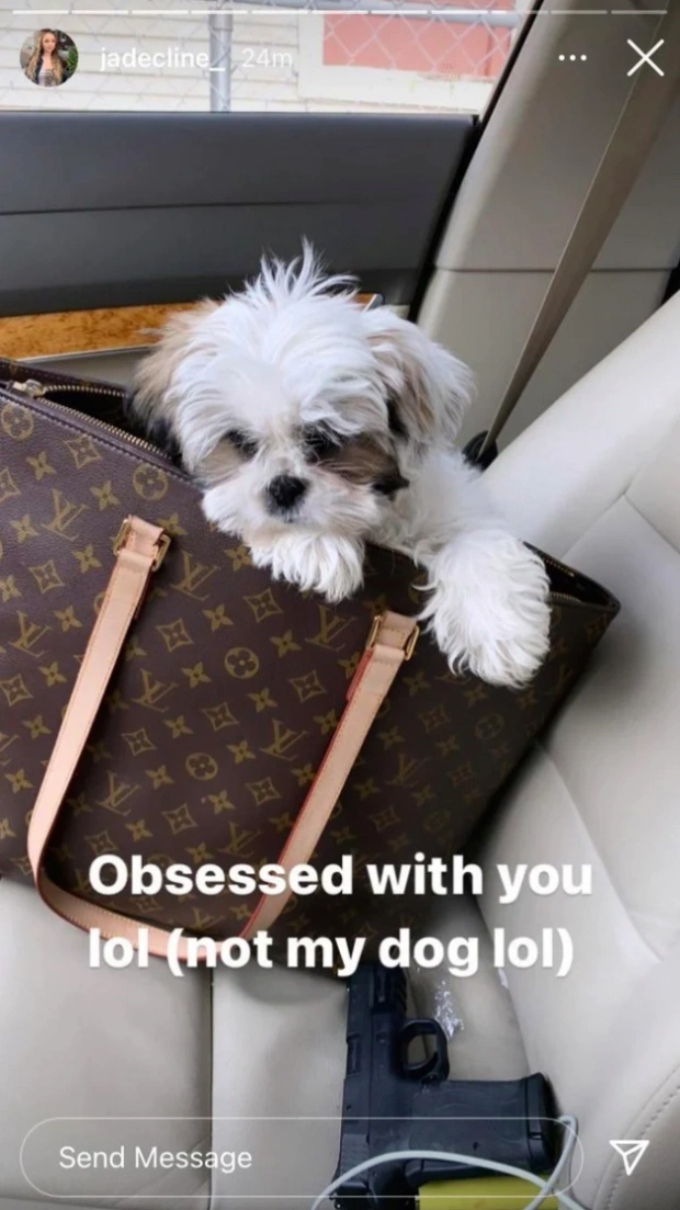 While fans thought Jade was irresponsible for having a gun in reach of her daughter, she is constantly trying to make sure that Sean is able to maintain Kloie’s safety.

During a recent episode of Teen Mom 2, Jade asked Sean to take a drug test to prove he had stayed clean.  He passed the test after being alone with Kloie for the weekend while Jade took some time away with her friends in Las Vegas.

Sean had an issue with substance abuse in the past, and Jade ended up breaking up with him because of it.  Now that Sean is back in the picture and involved in Kloie’s life, Jade continues to protect her daughter and ensure Sean is sober when around her.

The drama between Jade’s parents and Sean has been an ongoing issue.

Jade found what appeared to be drug residue on the counter in her bathroom. Jade’s parents convinced her the residue was from Sean while he blamed her parents.

Jade’s mother showed a video of Sean supposedly planting drugs in her parent’s bedroom to set them up. Sean claimed he went into the room to get a charger and that Jade’s parents were manipulating her.

Both Sean and Jade’s parents have battled drug issues in the past, however, Jade does not force her parents to prove their sobriety in order to be around Kloie.  Many fans criticized Jade for being so hard on Sean but having a double standard when it came to her parents.

Kloie has proven that she wants what’s best for her daughter based on the standards she sets for others.  It appears after the photo of her handgun, she may need to be more careful of her own actions moving forward.

Celebrities
Get the best celeb exclusives and video house tours to your inbox every evening with our daily newsletter Dani Dyer...
Lifestyle
Spoiler alert: This post contains spoilers about Schitt's Creek. Ted and Alexis share some seriously adorable and hilarious couple moments...
TV & Movies
A slew of new animated shorts featuring iconic Pixar characters are slated to debut January 22 on Disney+. Disney announced...
World News
Donald Trump looking to 'change the narrative' claims his nieceSpeaking to CNN, Mary Trump, who has been a strong critic...
Beauty
Legendary boxer, civil rights activist and all-round icon Muhammad Ali has never really fully left the cultural conversation, but he...
Fashion
Now those are some strong genes! Sisters Amelia Gray and Delilah Belle Hamlin showed off their crazy toned physiques in...
Recent Posts
We and our partners use cookies on this site to improve our service, perform analytics, personalize advertising, measure advertising performance, and remember website preferences.Ok