The 35-year-old actress remembered her beloved pet as she called the tragedy "earth shattering." 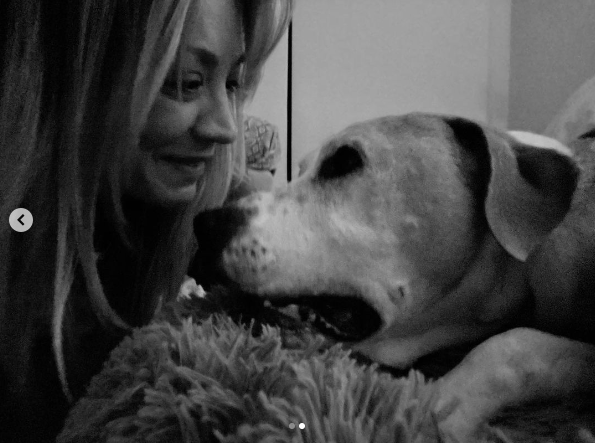 Kaley shared the sad new alongside two black and white photos that captured her with Norman.

"Norman, you were my entire world for 14 years.

"Thank you for smiling at me as you left this world, confirming for me once again our language was ours alone."

She concluded in the post: "You will always have my heart. 💔"

The Big Bang Theory star is an outspoken animal lover and often shares snaps with her many pets on social media.

Her love for Norman was clear, as Kaley named her film and television production company- Norman Productions- after the beloved dog.

In early 2020, Kaley shared a snap of her and Norman cuddling on Instagram.

She affectionately called Norman her "everything" in the post.

Kaley and husband Karl Cook, who she married in 2018, sadly lost their pup Petunia in November after they adopted the rescue dog in August.

Karl, 30, shared the sad news that Petunia had passed away in a heartfelt Instagram post at the time.

Kaley reposted Karl's announcement onto her Instagram Story, adding: "Thank you @PawsForLifeK9 for initially saving her. We were so honored to love her in her final days."

Before the couple welcomed Petunia into their home, Kaley campaigned for the pup to find a new home as she had to undergo surgery.

After a few potential foster families fell through, she and Karl decided to adopt the rescue pup.

Back in 2017, she spoke to The Los Angeles Times about how she became involved in animal rescue work.

She admitted that learning about the stereotype that pit bulls are dangerous made her want to stand up for animals, explaining: “I was like, ‘Oh, my God. I’m obsessed with this kind of dog.'

“I just found them to be so incredible. I realized what great dogs they were, and how horribly they were seen. And I just didn’t want that to happen anymore. So it became a passion.”

Kaley is best known for starring on The Big Bang Theory as Penny.

She currently stars on and produces the HBO Max series The Flight Attendant.