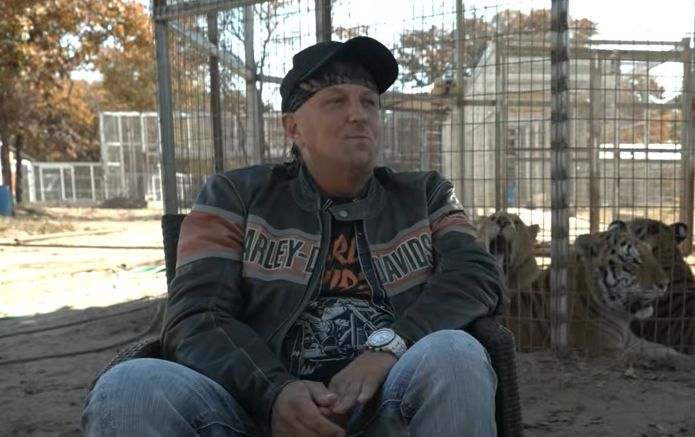 Tiger King 2 star Jeff Lowe has alleged that Netflix has ‘fabricated a scene’ in the recent trailer for the upcoming second season.

Just hours after it was revealed that Carole Baskin is suing the streaming giant and production company Royal Goode Productions over footage of her that features in the new chapter, the zookeeper spoke out.

Lowe claimed that Netflix used an impersonator in the teaser, which he alludes has been dubbed over a video of him speaking.

‘Netflix is already up to their old tricks,’ a statement on his Instagram page, which he shares with his wife Lauren, read.

‘Tiger King 2 producers confess that Netflix fabricated a scene in their latest trailer that shows Jeff Lowe making the claim that they “have more money than God right now”.’

It continued: ‘On closer examination, you might notice that indeed the voice appears to be an impersonation and doesn’t match the words Lowe is speaking.’

In the dramatic two-minute trailer, Lowe is seen gloating that he has ‘more money than God’ before flashing a bedazzled Tiger King chain.

After that though, he climbs onto a bed with his partner Lauren and a mystery woman.

Tiger King 2 vows to explore ‘newfound revelations… on the motivations, backstories, and secrets of America’s most notorious big cat owners’, the synopsis has teased.

Baskin and her husband is taking action against Netflix and were said to be surprised to see film of them being used in the trailer for the sequel.

The document reads: ‘Understanding that the Appearance Releases limited Royal Goode Productions’ use of the footage of the Baskins and Big Cat Rescue to the single, initial documentary motion picture, the Baskins believed that any sequel – though odious – would not include any of their footage.’

According to the papers, the Baskins are demanding that Netflix and Royal Goode Productions remove footage of them from Tiger King 2.

Carole has been critical of the upcoming documentary in recent months, previously slamming the programme by saying she refuses ‘to be played again’ by the docu-series.