Editor’s note: Colman Domingo (Zola, Ma Rainey’s Black Bottom) is one of many Black actors whose careers were inspired by Sidney Poitier who broke racial barriers to become Hollywood’s first Black movie star and the first Black man to win Best Actor Oscar. In an essay for Deadline following Poitier’s death at age 94, Domingo writes about his meeting with Poitier and about the profound impact that encounter — as well as Poitier’s life and career — have had on him.

To Mr. Poitier, with love.

We mourn you. We celebrate and cherish you. You were and will forever be our guiding light. When the world tells us that we don’t matter, you never wavered. Fire, wit, grace, humor and humanity, you were born with the lions share. A quintessential Hollywood star. A bonafide Broadway legend. A Civil Rights icon. A gentle human.

In January of 2015, I received an invitation from Oprah Winfrey. To join her, Ava DuVernay and David Oyelowo and the extraordinary cast of Selma to honor the Legends that Paved The Way. I was performing on London’s West End in The Scottsboro Boys. In the movie Selma, I portrayed Ralph Abernathy, Dr. King’s right hand man. And we were to screen our heartfelt film and stand on stage and honor legends such as John Lewis, Diane Nash, CT. Vivian, Berry Gordy, Dick Gregory amongst others and To Sir with Love, himself, Sidney Poitier. There was just no way that I would miss being in that spirited room. I put in my request to take off for a weekend to be in Santa Barbara. When I say “request,” for the first time ever in my career it was more like a demand. There is no way that I would miss this historic moment. This invitation doesn’t come around often. Especially for a kid from West Philly who was never expected to even be asking this “request” from his dressing room on Trafalgar Square.

So off I went. I wasn’t rolling in money, so I booked a flight on an airline that would take me from London to Zurich to Los Angeles to Santa Barbara. I treated myself to Comfort Plus on my return since I literally would go straight from the Gatwick Airport to my call time back at the Garrick Theater. 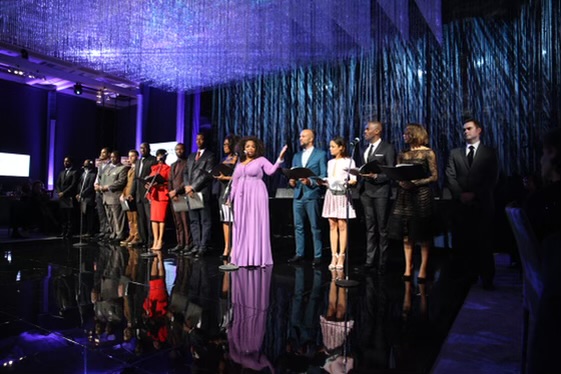 Oprah laid out the red carpet for this cast. On the grounds of the hotel I would run into Smokey Robinson and his lovely wife. Legends from all disciplines were dressed in their finest to celebrate this momentous occasion. There was a Legends Ball where we, the cast of Selma, stood in front of these icons and read a beautiful poem that was written by Pearle Cleage to honor this moment.

The next day we would all caravan in SUVs to Oprah’s breathtaking home, aptly called The Promised Land. Oprah and Stedman [Graham] stood under a Welcome Tree and shook hands with every single person that came to celebrate. 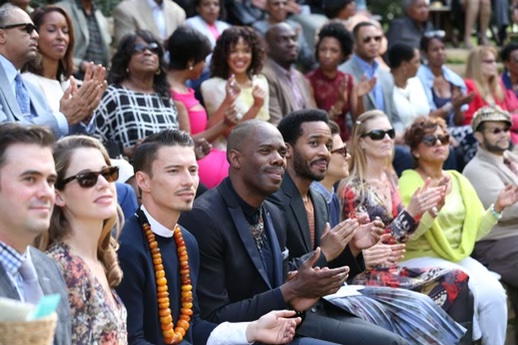 We all found ourselves casually seating on the glen where a revival of sorts would take place. We were going to church at Oprah’s. Ava embraced me and introduced me to Tyler Perry who was standing near her. I smiled so wide as I walked through to fellowship with others. And then I turned over my right shoulder and there he was. Smiling right at me as if we knew one another. Mr. Poitier. He was sitting a few rows on what, in my memory, was a small hill as the seating rose. His eyes twinkled with what seemed like all of the secrets of the world. My body just walked me up to this giant and we gently shook hands. “How are you?” he said. I have no recollection what I replied, but I am sure I said very well. My heart was in my hands all weekend, in quiet awe of every single detail. This was the most profound moment for me.

You see, Mr. Poitier’s career indeed was the North Star for actors and artists like me. When I struggled as an actor in the Bay Area and constantly auditioned for thugs and drug dealers, Mr. Poitier said, you are so much more, create the work and keep going. When I tread the boards and worked towards complex representations of Black men, I looked to Mr. Poitier to know that there is audience and room for this, keep going. We can challenge the system which at times looks to the most marginal representations and celebrate them as our very best, keep going. We all looked to Mr. Poitier to know that a glass ceiling had been smashed and it was up to generations of Morgan Freemans, Denzel Washingtons, Danny Glovers, Sam Jacksons and all of his “children” — myself included — to take up the mantel and continue to try and stand on the shoulders of his great legacy. He had such enormous shoulders that carried a whole nation with his artful legacy, and this is no easy feat. But we will try. We will keep going.

This weekend we mourn and cherish, and tribute and meditate on all that Mr. Poitier has done for all of us brown skinned boys from humble backgrounds, worked as a dishwasher, tread the boards, blazed a singular path and is deeply imbedded in the culture of American art as a profound actor, director, producer and human. I thank him. My brothers thank him. Truly and exquisitely for his tremendous service. He has moved the needle for all of us. May we make him proud. May this industry that wants to be more diverse, inclusive, and equitable make him proud. We will all look to this North Star.

To Mr. Poitier, with love. May he be the guiding light for us all.

The Film That Lit My Fuse: Joe Wright On Martin Scorsese’s ‘Taxi Driver’