The best Batman movies are still those directed by Tim Burton. Full of characteristic mock-Gothic touches, this 1989 blockbuster makes effective use of Michael Keaton as an unusually sensitive Bruce Wayne, but belongs to Jack Nicholson, whose joyously homicidal Joker is the interpretation all others must be measured against. Digitally projected. Astor, Sat June 1, 4pm.

Reportedly Elvis Presley's favourite of his own films, this 1958 black-and-white musical melodrama — based on a Harold Robbins novel — casts him as a high-school dropout embroiled in the New Orleans underworld while trying to launch his singing career. The director was the veteran Michael Curtiz (Casablanca). Digitally projected. Astor, Sun June 2, 2pm.

The myth of Superman is retold with a crucial twist in David Yarovesky's provocative horror film, in which a couple (Elizabeth Banks and David Denman) face certain challenges in raising an alien baby as their own. Producer James Gunn (Guardians of the Galaxy) appears to have been a crucial force behind the scenes. Selected. 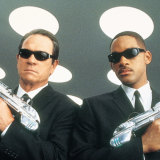 Tommy Lee Jones and Will Smith in Men In Black.

Directed by Barry Sonnenfeld (The Addams Family), this 1997 science-fiction comedy has a light touch rarely matched by such entertainments today. Tommy Lee Jones and Will Smith play secretive government agents on the lookout for illegal aliens — in the extraterrestrial sense — and their byplay scores as many laughs as the special effects. Astor, Sun June 2, 4.15pm.

Based on real events, this grim case study from Swiss director Hannes Baumgartner centres on a champion long-distance runner (Max Hubacher) whose habit of training after dark provides him with cover for a string of violent crimes against women. Largely avoiding pat psychology, it's chilling in its very matter-of-factness. Screens as part of the German Film Festival. Palace Brighton Bay, Sat June 1, 3.50pm.