Hulu’s Plan B is the next teen comedy that’ll keep you on your toes.

Directed by Dead to Me and Parks and Recreation star Natalie Morales in her solo directorial debut, the action picks up when two BFFs — straight-laced high school student Sunny (Kuhoo Verma, The Big Sick) and her slacker best friend Lupe (Victoria Moroles, Teen Wolf) find themselves with 24 hours to hunt down a Plan B pill in America’s heartland after a regrettable first sexual encounter. Written by Prathi Srinivasan and Joshua Levy, ET exclusively premieres the official red-band trailer for the R-rated Plan B (warning: it’s super NSFW but oh-so-juicy!).

“I’m so proud of this movie in so many ways. It’s exactly what I thought it could be and more. And I know the chances of that when you make or do anything are kind of slim so I’m so excited that this huge group of people that came together to make this movie — everybody is really responsible for making this what it ended up being,” Morales, who’s worked on the film since the end of 2018, exclusively tells ET. “I’ve been working on this from the moment that I met with the producers who had the script and I was like, ‘There’s no chance they’re going to let me direct this movie. But I’ll just tell them what I think it could be if I made it.’ And they said yes, which was crazy.”

FIlmed during the pandemic, the next step was finding the two young heroines; casting the perfect actresses who could believably play best friends without ever having met in person was a tall order, especially during a pandemic. Luckily, Verma and Moroles’ auditions catapulted them to the top of the list. The rest, as they say, was history.

“I knew Victoria a little bit beforehand and I was so excited for her to audition, but they both blew all of us away in their auditions. What’s craziest is that they had to do their chemistry test, which is usually done in person, but because of COVID and everything else they had to do their chemistry tests over Zoom. So these two people who had never met had to pretend that they were best friends and do a scene together via Zoom, which is really, really hard to do for any actor. And they just nailed it,” Morales recalls. “We all just knew that there was something really, really, really special there. I mean, if their chemistry didn’t work and if they weren’t great, the movie wasn’t going to work. So we got really, really lucky because they’re both so incredibly and uniquely talented and are so compatible with each other and have so much chemistry with each other, but they’re just really fun to watch together.”

Inspired by teen classics of recent memory (think Superbad, Can’t Hardly Wait and 10 Things I Hate About You), Plan B served as Morales’ way into giving the teen movie genre a modern jolt — with a fresh perspective told through the lens of two main heroines who aren’t well-off, white or aiming to solve relatively trivial problems. Morales acknowledges the comparisons that might be made to HBO Max’s Unpregnant, which holds a similar-ish premise, or even Booksmart. As she points out, Sunny and Lupe are dealing with a life-changing predicament in their own circuitous way. “I love Booksmart a lot, but this goes a little deeper than that,” she says. “Something that’s really exciting for me about this movie that makes it different for me, besides the fact that our leads are not Caucasian, which is just matter of fact and not necessarily on purpose, it’s just representative of other people. I’ve really never seen that happen in a teen movie like this, especially in this kind of teen quest comedy.” 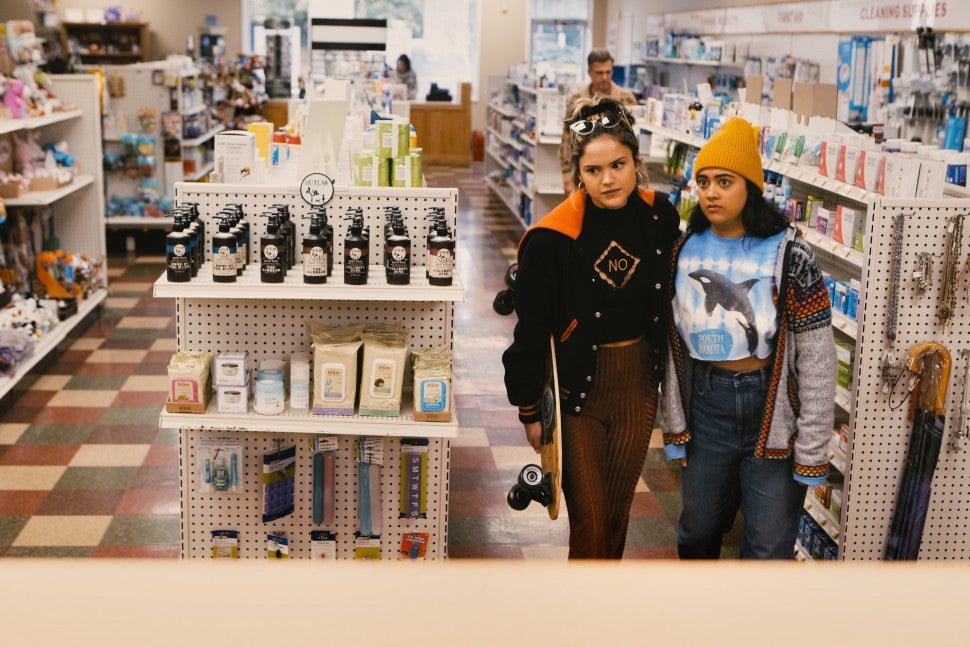 “The real thing that stands out for me, it is just as crazy and funny and bananas as American Pie and Superbad, but the teen quest — even in Booksmart the main problem was that they got into a great school and so did everybody else. The main problem in Superbad was that they need to get alcohol to this party that they wanted to go to. This [movie] has all of the elements of those films, but the main quest is that they have to get basic healthcare,” Morales notes, bringing to light the un. “They have to get the Plan B pill, which is a real, actual problem in our country. It’s grounded in that reality and at the same time, having all of the same fun things that we’re used to having. The characters in this movie and the way that they live their lives and the things that are accessible to teenage girls and to teenagers in general are a little more relatable than they have been in movies that are centered around wealthier white people. That’s why I was interested in making this movie because it speaks to and is intended to speak to and represent a greater swath of the American teen than has been represented before.”

There’s a sense of pride when Morales discusses the inclusiveness of the project, from the talent in front of the camera to the hard-working people behind it. “It’s not hard at all. There are a lot of really talented people of all different kinds of backgrounds and faces and looks and ideas,” Morales says. “There are two elements of this. The more you make the things that you see on TV and movies look like the actual world around you, the better they’re going to be because they’re relatable and it’s representative, and it makes people feel seen. And it also tells the truth in a much deeper way. It’s not hard to find people in front of and behind the camera who are extremely talented.”

“Secondly, behind the camera and in front of the camera, because they’re collaborators as well, the more diverse the voices are — and I don’t mean that in the sense of just diversity, the more different kinds of people there are with different kinds of experiences, the better your thing is going to be because it’s richer, it’s fuller. It has more to it than just one kind of experience. It makes the project better all-around and it’s not difficult to do, you just have to look outside of your own bubble.” 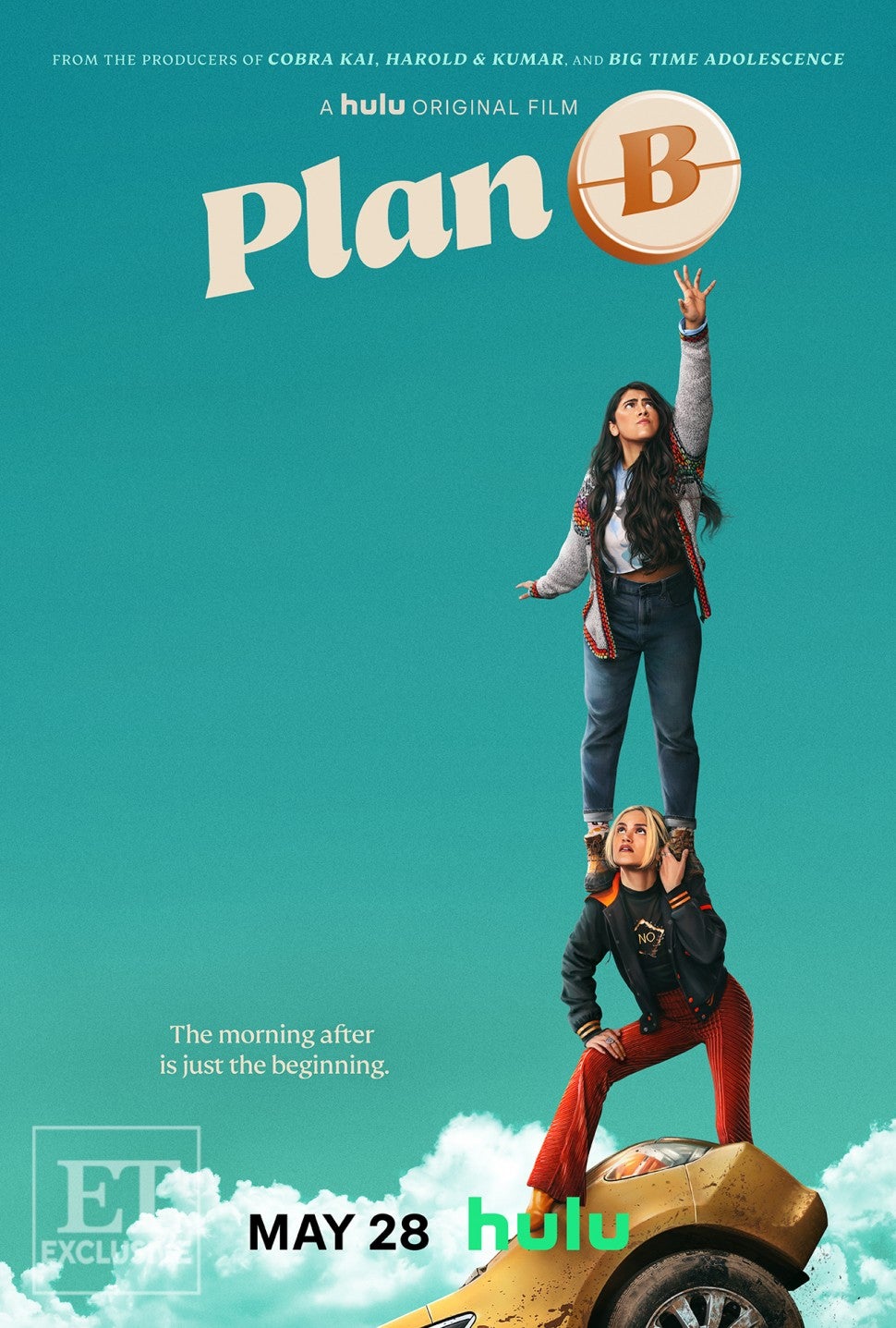 Plan B drops Friday, May 28 on Hulu and will be available in limited theatrical release in Los Angeles.

To stay up to date on breaking movie news, sign up for ET’s daily newsletter.