RJ Mitte recognises he will always been known as the kid from Breaking Bad.

"Yeah man, that's going to follow me till the day I die," he says. "And that's not a bad thing. Breaking Bad was a very special show." 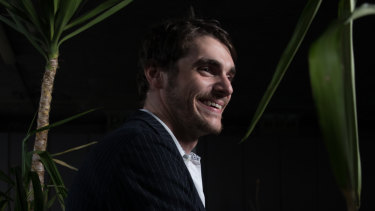 “That’s going to follow me till the day I die”: RJ Mitte. Credit:Janie Barrett

He grew up on Breaking Bad – auditioning four times at the age of 13 when Gilligan was unsure whether his disability was too mild for a character he imagined using crutches.

Brain damaged at birth and diagnosed at three, Mitte needed leg braces and had to learn to control his limbs as a child but went on to play soccer with his mum yelling "run, Forrest, run" from the sideline.

Since the series finished six years ago, Mitte has modelled for fashion designer Vivienne Westwood and the Gap clothing chain as well as shooting "two to three movies a year" and the recent TV comedy series Now Apocalypse.

Now 26, his latest film is an Australian romantic comedy. 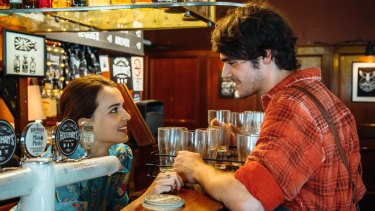 Philippa Northeast and RJ Mitte in Standing Up For Sunny. Credit:Sydney Film Festival

In Standing Up For Sunny, Mitte plays a comic who shares a house in Sydney's inner west with a blind musician (newcomer Italia Hunt) and falls for a bartender with bulimia (Philippa Northeast from Home and Away) who he is coaching in stand-up comedy.

Writer-director Steve Vidler's film, which has cameos for comics Barry Humphries, Akmal Saleh and Arj Barker, was warmly received at the world premiere at the Sydney Film Festival on Wednesday, though Mitte walked out as it started because he hates hearing his voice.

He later told a deaf questioner from the audience that he was lucky he did not have to listen to him in the movie. 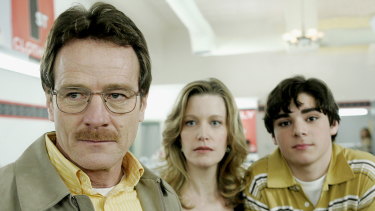 Mitte reckons he had no difficulty playing a comedian.

"I think I have enough self-loathing and spite in my life to be a comic," he says. "Somewhere in every comic is self-disapproval and hate."

While Breaking Bad has allowed him to advocate for such organisations as Cerebral Palsy Alliance, Mitte is puzzled that Hollywood's push for more diversity has not included characters with disabilities.

"If you're disabled, you're part of a small minority but at the same time you're part of everything and everyone," he says. "A lot of the time, when people see disability [in a movie], it reminds them of their limitations.

"But the whole point of highlighting them is showing there are no limitations … I believe that all of our faults and all of these perceived weaknesses are actually strengths."

Mitte has no problems with Daniel Day-Lewis playing Irish writer Christy Brown who had severe cerebral palsy in My Left Foot or Eddie Redmayne taking to a wheelchair to play Stephen Hawking in The Theory Of Everything but thinks there should be more opportunities for actors with disabilities of all kinds.

"You're talking about movie stars," he says. "Massive movie stars. They embody those characters and somehow they bridge the gap … those movies affected people. Hundreds of millions of people."

While not involved in a planned Breaking Bad movie, reportedly a sequel focusing on Aaron Paul's character Jesse Pinkman, Mitte would love to reprise his role.