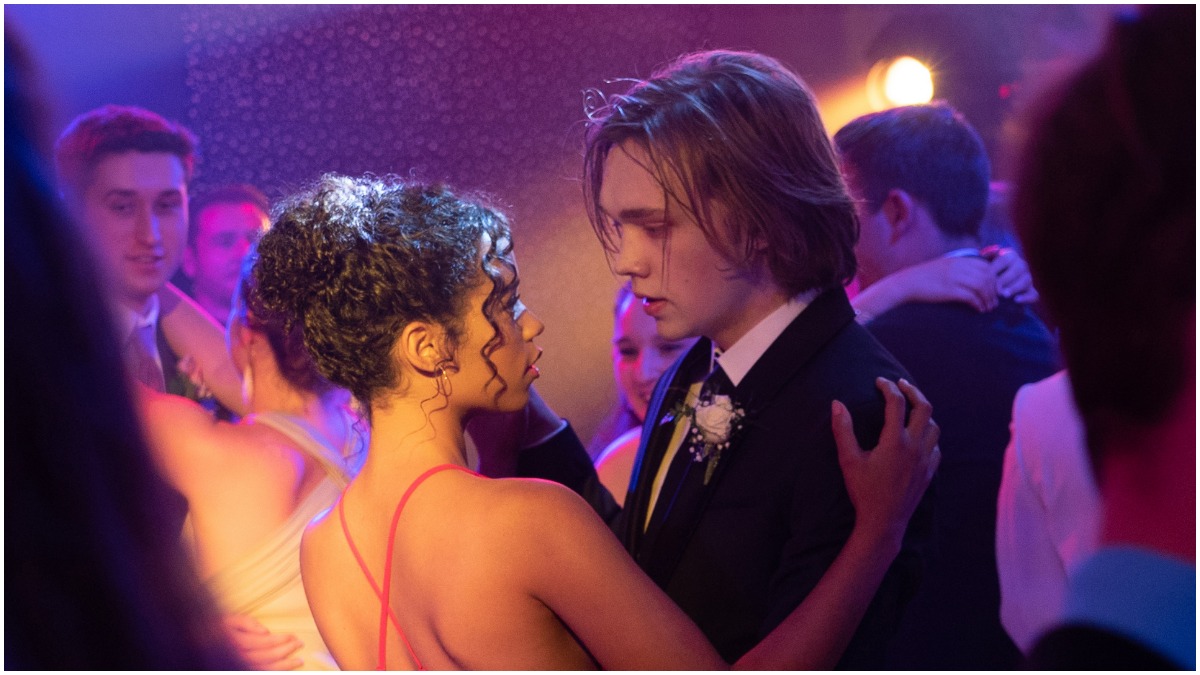 The movie blackout caused by the coronavirus pandemic is over with and the first new movies since early in the year are finally hitting theaters.

While the biggest movie hitting this weekend seems to be the action thriller Unhinged with Russell Crowe (see our review of Unhinged here), there is a smaller indie film that deserves your attention.

Here is our review of the brand new theatrical release, Words on Bathroom Walls.

Telling a story about mental illness is hard.

Oftentimes, the storyteller will go either too dark into the weeds or they will pull out all the melodrama needed to make the disability seem like a terminal illness.

A great example of a movie about mental illness done right was the 2012 film The Perks of Being a Wallflower, which dealt with PTSD and depression.

Words on Bathroom Walls tackles a different issue and one that honestly has no cure – schizophrenia.

Based on the novel by Julia Walton and directed by Thor Freudenthal, the movie stars Charlie Plummer as Adam, a high school senior battling schizophrenia.

In no surprise for a film by the director of Diary of a Wimpy Kid, the film uses special effects to show the effects of the schizophrenia for the viewer to see, along with Adam, as he struggles to make it through each day.

The movie opens with Adam in chemistry class, where he has an anxiety attack. This attack manifests itself as a black fog like smoke with a deep voice speaking to Adam, telling him he is worthless and letting him know that things will always go wrong.

It is assumed this is his worst attack yet, as Adam has no idea how to deal with the visions and freaks out. The episode ends with him accidentally knocking a vial of chemicals onto a friend, severely burning him, before a police officer restrains him.

His high school expels him for his anxiety attack.

This trope is where some people might find themselves turning away from the film. It might seem a little too lighthearted and whimsical for a movie about mental illness. However, this film should not be judged by these storytelling aspects.

The hallucinations show how Adam deals with his schizophrenia. It isn’t always dark clouds and threats. Sometimes, it is self-defense mechanisms. However, when the dark clouds do arrive, that is when things go wrong.

Adam’s mother, Beth (Molly Parker), has been with him through it all and has been dealing with it alone since his dad has left both of them (something else that the voice blames Adam for). She wants to find him help through pills and medication and therapy, but nothing has worked so far.

His mom and her new boyfriend, Paul (Walton Goggins), get Adam accepted into a private Catholic school, and he realizes this is his last chance. He aspires to go to culinary school. Cooking is important to Adam because it is the only thing that quiets the voices in his head.

Charlie Plummer is spectacular as Adam. He shows viewers what it has to be like to go through these kinds of experiences. There are also therapist sessions in the movie where the therapist never appears. He talks directly to the camera, and the audience is the voyeur in these sessions.

Even when the hallucinations appear, Plummer keeps the story grounded through his reactions and horrors, selling the highs and lows of his battles.

Credit also goes to actress Taylor Russell as Maya, who he takes on as a tutor and with whom he falls in love. The two young actors deliver in every scene they appear in, especially in their guarded personalities. Neither wants anyone to get too close, and both have their secrets.

Also, turning in an excellent performance is Parker as Adam’s mother, showing the struggles of a mom trying to help her child. Andy Garcia is also solid in his small role as a priest at the Catholic school.

The best thing about Words on Bathroom Walls is that the film never glamorizes Andy’s mental illness or makes it a joke. Yes, they play some of his schizophrenia for laughs, especially with the hallucinations that speak to him. However, Plummer is a star on the rise, and he carries this movie on his back, never letting the sillier moments let down the real message.

The ending looks like it is setting up for something special, but the best thing about this movie is that it subverts the audience’s expectations. This isn’t a movie that takes the easy way out, although it doesn’t end on a down note either. Andy has to learn to fight and become the man he wants to be. No one can give him an easy way out in this battle.

Mental illness is not anything to take lightly, and the movie never does, even with the quirkier moments spread throughout.

Words on Bathroom Walls is one of the best movies so far in 2020, and it well worth the watch as theaters reopen before Labor Day.

Charlie Plummer deserves all the accolades he receives for his performance. He sells Adam’s hopelessness and pain, and he is the reason that it hits home when the credits finally roll.

The movie is smart, creatively constructed, and delivers an intelligent story that takes mental illness seriously.

Words on Bathroom Walls is highly recommended for anyone who wants to risk the theaters as they reopen this weekend.

Words on Bathroom Walls opened in theaters on August 21 and is currently showing nationwide.