Historical conservators found less than they expected when they meticulously pried open an 1887 time capsule Wednesday rumored to contain a rare photo of Abraham Lincoln lying in his casket.

Instead, the shoebox-sized container held a coin, a cloth envelope, printed letters and three water-damaged books, including an 1875 statistical manual.

It was an anticlimactic and disappointing end to a day spent slowly and tediously clawing open the box, with conservators using a variety of tools and tricks to crack it apart while preserving its contents.

As state archaeological conservator Kate Ridgway struggled with it, she quipped: ‘If anyone has done time travel, can you go back and ask them to lay off on the mortar?’

The capsule, discovered under a recently-removed statue of Confederate General Robert E Lee in Richmond, Virginia was initially expected to contain about 60 items, mostly Civil War relics and Confederate memorabilia.

It took nearly a day to unbox the contents before a crowd of journalists, Virginia Governor Ralph Northam, and First Lady Pamala Northam, who’d gathered in the hopes of witnessing the unveiling of historic treasures. 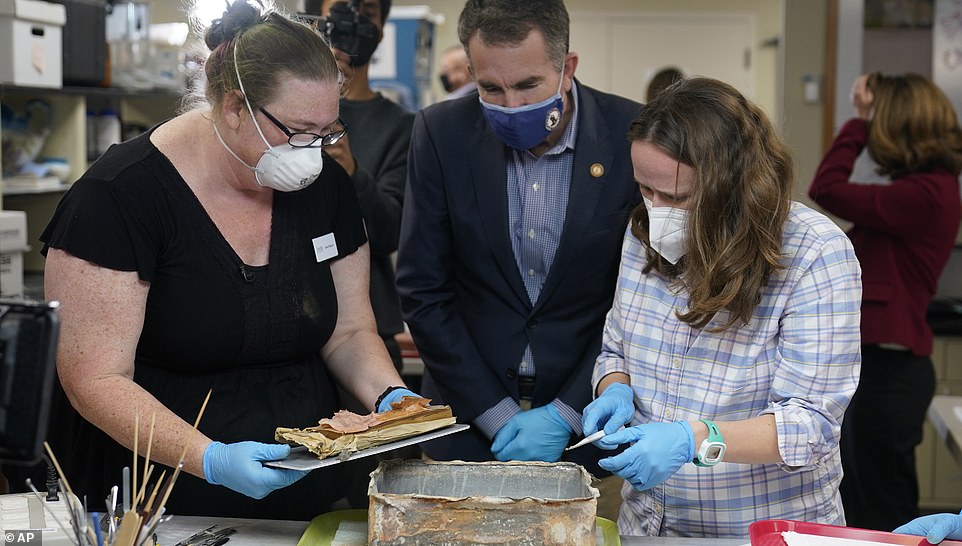 Historical conservators found less than they expected when they meticulously pried open an 1887 time capsule Wednesday thought to contain a photo of Abraham Lincoln lying in his casket. Governor Ralph Northam (center) was present during the unboxing

The capsule – which was initially expected to be recovered in September but took months to find – did not do a sufficient job in preserving the artifacts it contained, despite the metal box being enrobed in a thick layer of mortar.

‘Everything is really wet, so we’re trying to do this really slowly so we can separate things,’ state archaeological conservator Kate Ridgway told onlookers. 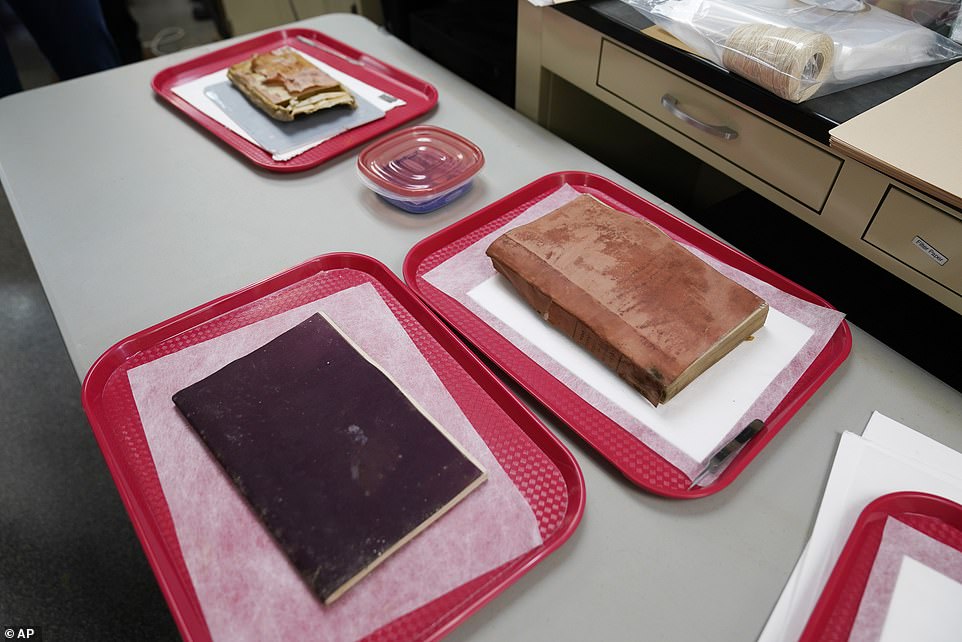 Instead, they found three water-damaged books, a coin, cloth envelope, and printed pages

The capsule had been long buried beneath a towering statue of Confederate General Robert E. Lee in Richmond that was recently dismantled at the behest of anti-racism protesters.

The container filled with century-old treasures was only discovered last week, despite construction crews unsuccessfully attempting to locate months ago after the massive bronze Lee statue was removed.

The day after the statue was removed, work crews spent more than 12 hours looking for the time capsule in the 40-foot (12-meter) tall pedestal, but gave up the search after being unable to locate it.

The time capsule was found Friday by crews working to remove the pedestal where the Lee statue had stood. 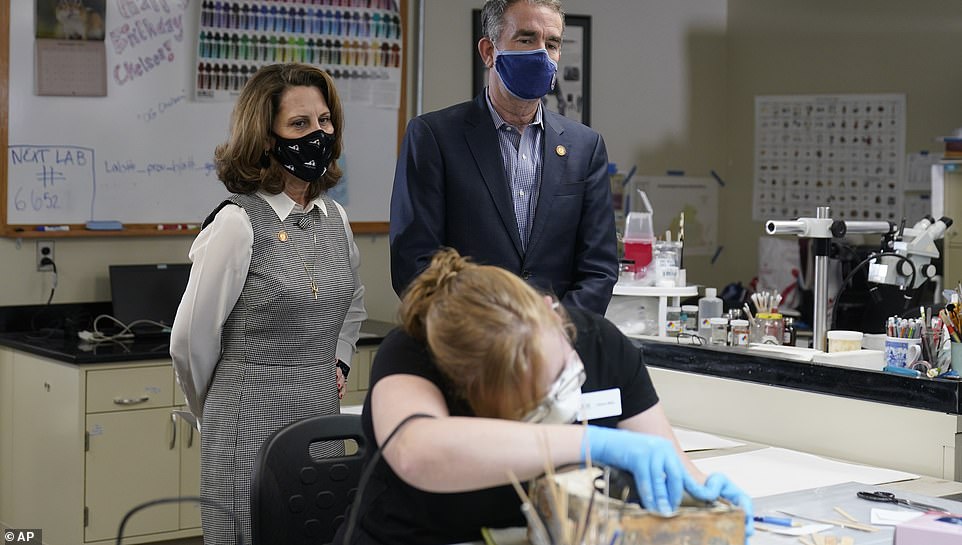 Virginia Governor Ralph Northam and his wife, Pamela Northam, watch as a conservator worked to open the capsule Wednesday 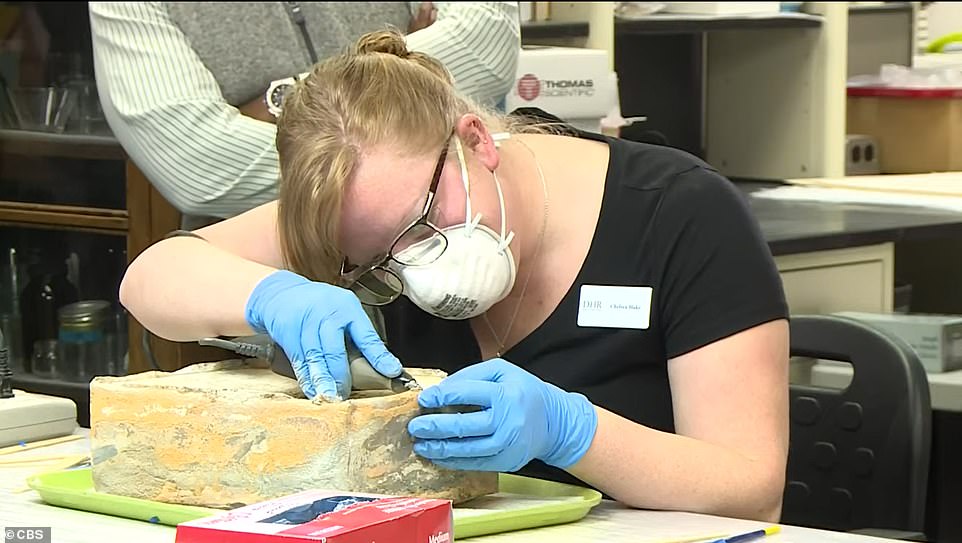 The conservator, Chelsea Blake, used special tools to slowly lift up the lid 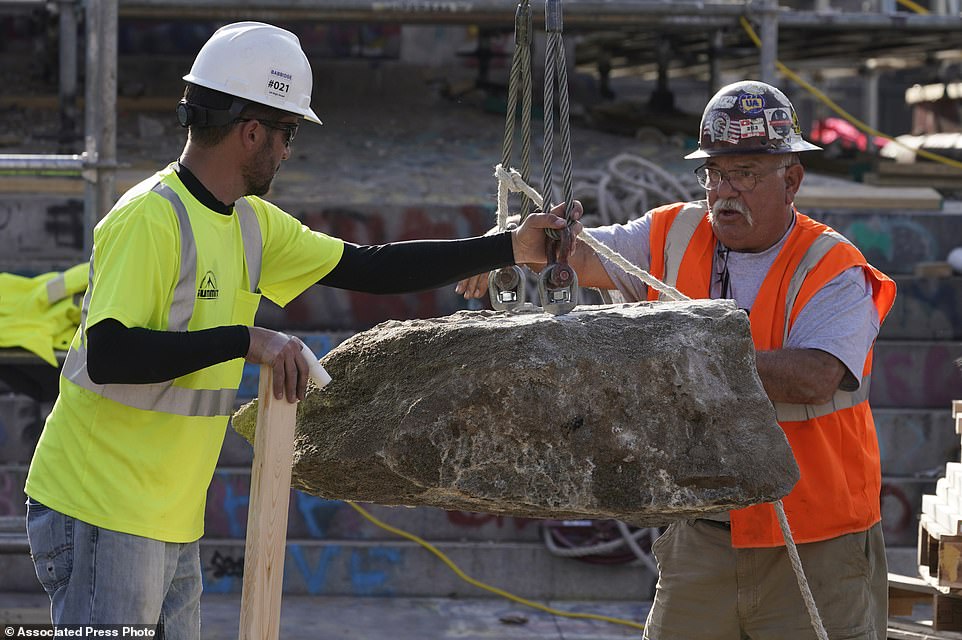 Pictured: Workers guide a stone containing a time capsule that was placed in 1887 in the pedestal that once held the statue of Confederate General Robert E. Lee onto a pallet

Its discovery came after the statue of Lee, erected in 1890, was taken down in September.

It was toppled more than a year after Governor Ralph Northam ordered its removal after protests over racism and police brutality erupted across the country – including in Richmond – following the police killing of George Floyd in Minneapolis.

The square box buried beneath it was embedded in a 2,000-pound (900-kilogram) granite block. Julie Langan, the director of the state’s Department of Historic Resources, told the Richmond Times-Dispatch that the box was removed from the granite Tuesday.

A newspaper article from 1887 suggests the capsule contains Civil War memorabilia and a ‘picture of Lincoln lying in his coffin,’ although historians believe it´s doubtful the picture is an actual photograph, which would be rare and valuable. 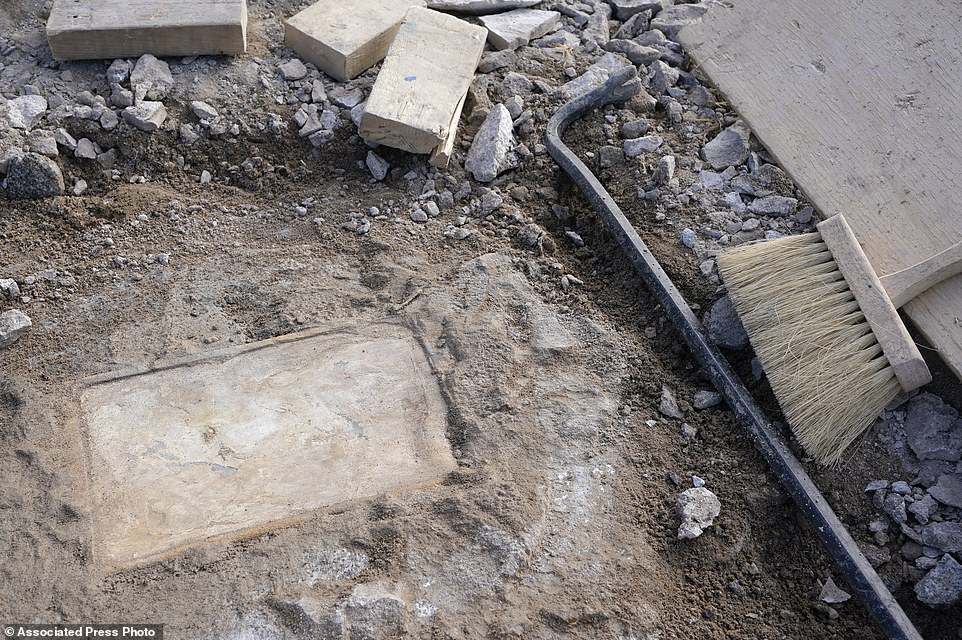 A time capsule that was placed in 1887 in the pedestal that once held the statue of Confederate General Robert E. Lee was uncovered on Monument Avenue last Friday 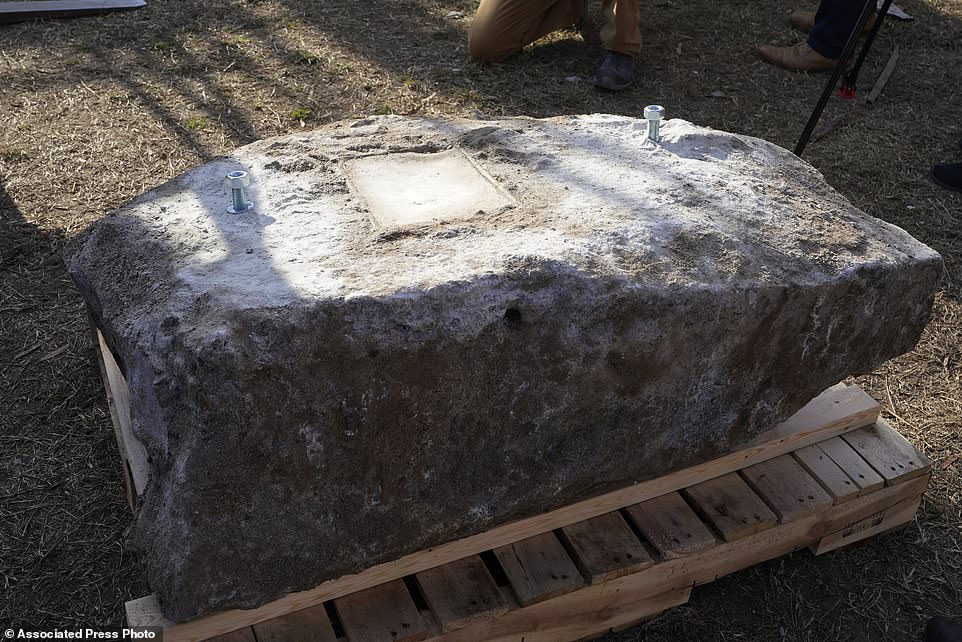 Virginia Gov. Ralph Northam ordered the pedestal removed and the land given to the city of Richmond. 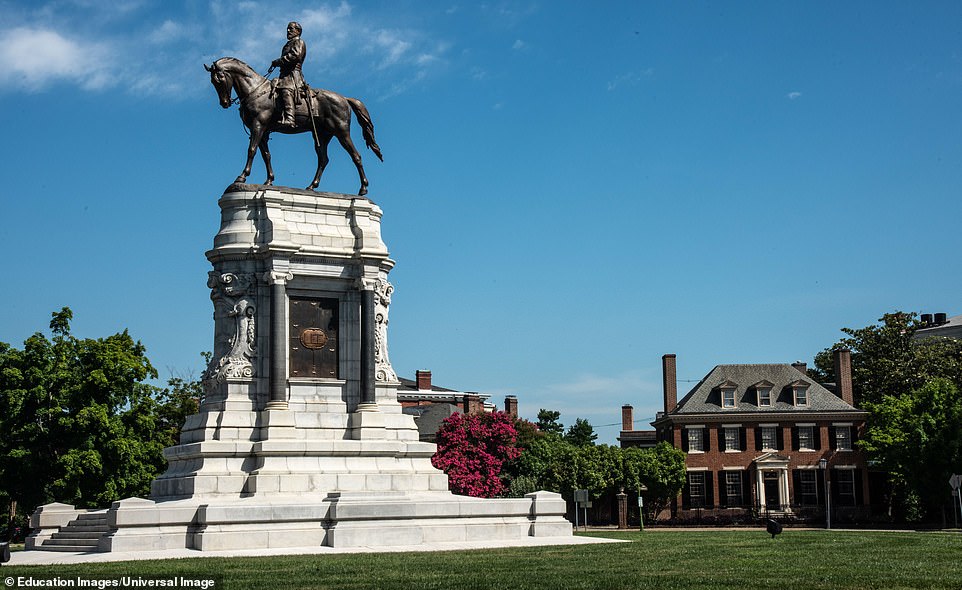 Officials initially searched for the capsule after removing a controversial statue of Confederate General Robert E. Lee in September, but were unable to find it at the time. It was discovered last Friday by crews removing the pedestal the statue once stood on

Records from the Library of Virginia suggest that 37 Richmond residents, organizations and businesses contributed about 60 objects to the capsule, many of which are believed to be related to the Confederacy.

What’s inside? A look at what the 1887 box contains

‘We´re hoping it hasn´t been damaged by water over the last 100-plus years,’ Clark Mercer, Northam´s chief of staff, said Friday.

The Lee statue was one of five Confederate tributes along Richmond´s Monument Avenue and the only one that belonged to the state.

The four city-owned statues were taken down in 2020, but the Lee statue removal was blocked by two lawsuits until a ruling from the Supreme Court of Virginia in September cleared the way for it to be taken down.

Northam, a Democrat, announced earlier this month that the enormous pedestal would be removed, a reversal from September, when the governor said the pedestal would stay in place so its future could be determined by a community-driven effort to reimagine Monument Avenue.

After Floyd´s killing in 2020, the Lee statue became a focal point of the racial justice movement in Richmond.

Since then, the pedestal has been covered in graffiti, some of it profane and much of it denouncing the police. Some activists wanted to see it remain in place as a work of protest art. 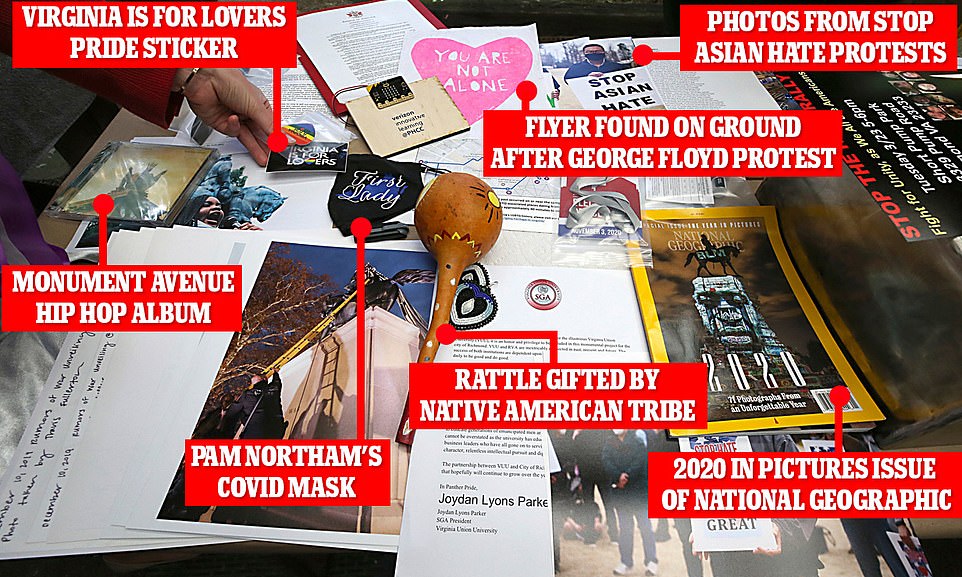 The 2021 time capsule includes a You Are Not Alone flyer found in the street after a George Floyd protest last year, a COVID mask worn by Virginia’s First Lady Pam Northam, photos from a Stop Asian Hate protest, a Virginia is for Lovers sticker, a hand painted gourd rattle that was a gift from the Mattiponi and Pamunkey nations, a hip hop album. 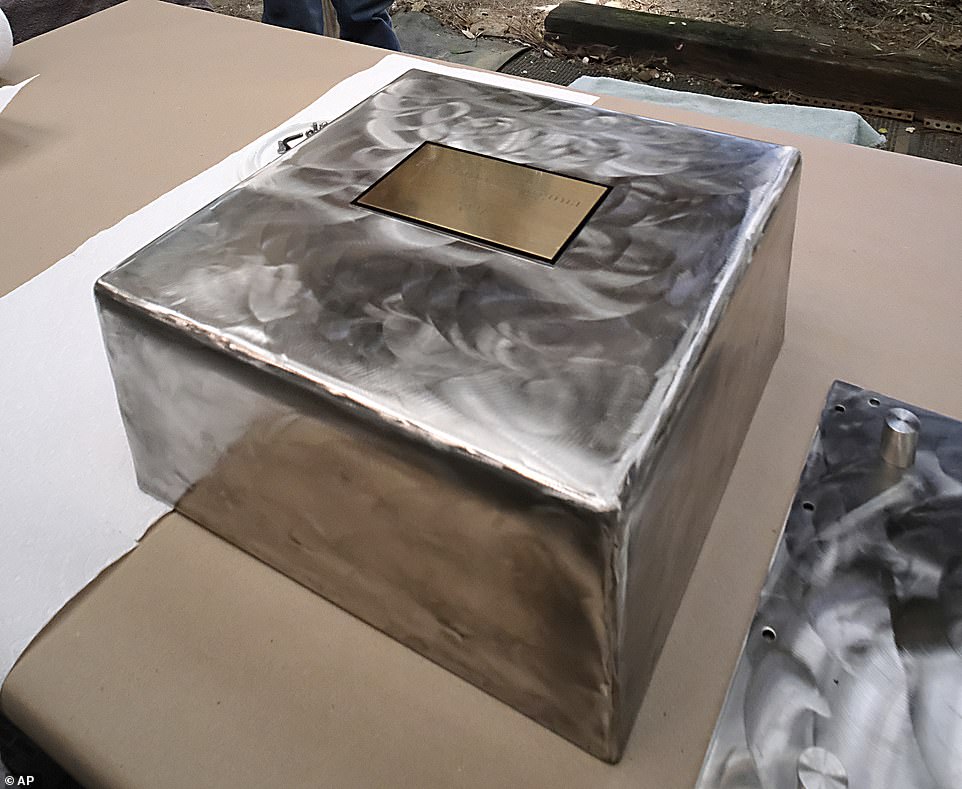 Once the site is clear, a new capsule containing 39 items that were proposed by residents of the city and selected by a group will be buried at the site

Items include a photograph of a black ballerina dancing in front of the vandalized statue and a copy of the National Geographic ‘2020 in Pictures’ issue with a photograph of the Lee monument on the cover.

It also contains a  ‘Kente cloth worn by the Commissioners of the Congressionally chartered 400 Years of African-American History Commission’.

THE 39 ARTIFACTS INSIDE RICHMOND’S 2021 TIME CAPSULE TO GO IN BASE OF ROBERT E. LEE STATUE

6. ‘Writing a new history’ Kente cloth worn by the Commissioners of the Congressionally chartered 400 Years of African-American History Commission and Ghanian emissaries that participated in the 400th commemoration of 1619 at Point Comfort in Hampton

8. General Assembly Acts of Assembly from the 2020 Special Session

9. ‘Virginia is for Lovers’ pride pin and stickers

11. Better Together LED Board coded by local schoolgirls

13. YOU ARE NOT ALONE pink heart print found on Richmond street after George Floyd protests in May 2020

16. Prayer beads left by a family member who passed away from COVID-19

18. Photos of the June 4, 2020 press conference announcing the removal of the Lee Statue

20. Photos and fliers from Stop Asian Hate protests in May 2021

21. Program and video from the dedication of Arthur Ashe Boulevard featuring a keynote from former Congressman John Lewis

23. Photo of the Virginia State Police at 14th and F Street NW in Washington helping DC Metro Police Department patrol the city for unrest after the insurrection at the US Capitol on January 6, 2021

24. Essays and poems from Arcadia Middle School students reflecting on the experience of being a student during a pandemic

26. ‘Charlottesville’s Robert E. Lee Monument is Coming Down, Thanks to Me and Black Women Like Me’ July 10, 2021 Teen  Vogue article written and submitted by Zyahna Bryant

28.  Gifts from the dedication ceremony from the Mattiponi and Pamunkey nations, hand painted gourd rattle and hand crafted earrings with sturgeon scale and beading

33.  Video of the One Commonwealth Many Virginians: Uniting in Interfaith Prayer for Healing and Unity event

38. List of artifacts in the previous capsule as described in a Richmond Dispatch article

39. Photo collage of individuals who contributed artifacts to the new time capsule and thank you note