A powerful storm walloped California with heavy rain and snow on Tuesday, as several inches of rain fell in the Los Angeles area and up to 8 feet of snow was expected in the Sierra Nevada.

The storm wreaked travel havoc across the state due to the rain and snow. It also raised the threat of mudslides in areas scarred by wildfires, prompting evacuation orders in southern California.

Nearly 7 inches of rain fell before dawn in one area of Santa Barbara County, northwest of Los Angeles, the National Weather Service said. The ongoing heavy rain will continue to create areas of flash flooding, with urban areas, roads and small streams the most vulnerable, the Weather Service said.

Further north, in the central Sierra Nevada, a whopping 2 to 4 feet of snow was forecast to pile up with local amounts to 6 to 8 feet over the highest elevations by Tuesday night, AccuWeather said.

Start the day smarter: Stay up to date with this story. Get USA TODAY's Daily Briefing in your inbox

More: California's Pacific Coast Highway is falling into the ocean. Is this the end of the road for one of America's most scenic drives?

"It’s just so bad and so thick,” said California Highway Patrol Officer Carlos Perez about the snow-covered roads around Lake Tahoe. “We’re telling people that if they don’t need to be around this area, they probably shouldn’t travel.” 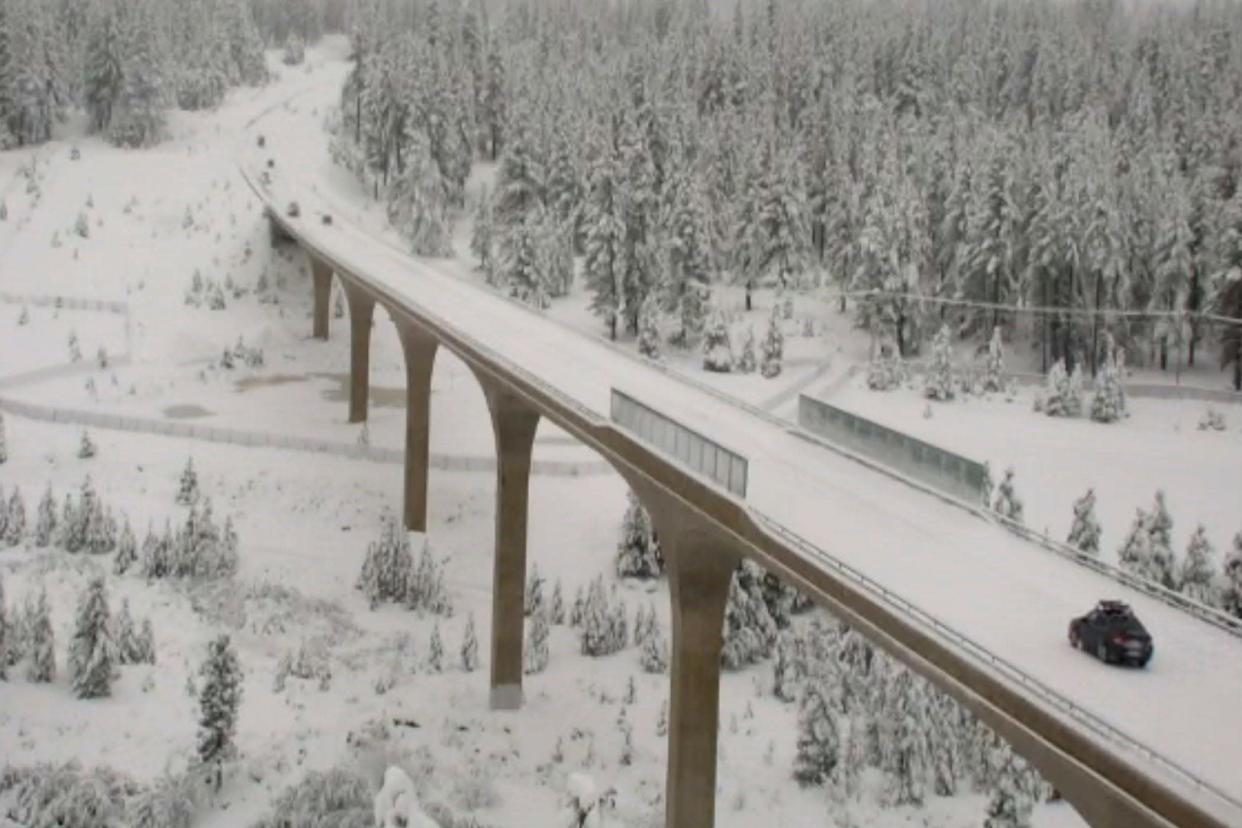 The storm brought much-needed moisture to the broader region that’s been gripped by drought. The latest U.S. drought monitor shows parts of Montana, Oregon, California, Nevada and Utah are classified as being in exceptional drought, which is the worst category.

After hitting California, the storm will move into the Southwest and pack enough moisture for a thorough soaking around Las Vegas, while a couple of showers are likely to dampen the roads around Phoenix, AccuWeather said.

***UPDATE***. Firefighters continue to rescue those who are trapped. Evacuation orders are in effect for Modjeska, Silverado, and Williams Canyons. Please avoid the area. pic.twitter.com/yK3AzAmk4P

The same storm is predicted to produce a swath of strong winds from the deserts to the central and southern Plains Wednesday. Not only will winds be strong enough to kick up dust and raise the risk of wildfire ignition and rapid spread, but also the potential for local to regional power outages, AccuWeather warned.

A Weather Service forecast office in Nebraska warned of 70-mph gusts, adding that "travel will be difficult, especially for high-profile vehicles. Trucks may be blown over. Holiday decorations will be damaged or blown away."

This article originally appeared on USA TODAY: California storm has potential for 8 feet of snow with rain and wind