A centre for Aboriginal early childhood and family care in Melbourne’s north that has a proven track record delivering on the goals outlined in Closing the Gap policies is now calling for a greater commitment from the state and federal governments to end its funding uncertainty.

The Bubup Wilam Aboriginal Child and Family Centre in Thomastown helps Indigenous children and families in Melbourne’s northern suburbs by delivering on Closing the Gap measures like keeping families together and equipping Aboriginal children with the skills needed to transition to school. 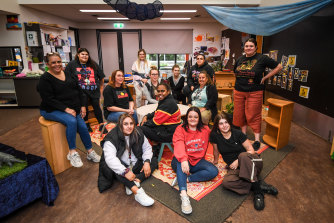 When it opened in 2012 it was the first early years education and care service of its kind in Victoria and only one of three in Australia. It is managed, led and controlled by a board of nine Aboriginal community members and an Aboriginal chief executive officer.

Despite a decade of positive outcomes, the community-controlled centre’s board says it remains under-funded. They are calling for bipartisan support from government to ensure the ongoing delivery of a holistic, culturally safe model of care.

Bubup Wilam board member, Wendy Brabham, describes the centre as being “old practice expressed in new practice that is relevant today”, but says its approach often is not recognised by government.

“Government often sees it as a mainstream, early childhood kinder. The whole funding streams are wrong because we’re doing a great service to primary and secondary school with our approach at early childhood level. We prepare the child to live with two world views,” says Brabham.

Brabham says school curriculums still do not invest enough time or resources into curriculum development for First Nations children to counteract the harm done by assimilation policies and to provide “relatable” equal learning.

“We’re preparing our children for Australian society, but we’re equipping them appropriately. They’ve been raised by their community through the centre, and our community values flow on better,” she says.

Brabham, who has worked in Aboriginal education since 1976 and was an Aboriginal liaison officer for a 1985 review of early childhood services in Victoria, said she had observed the gains in skills and confidence in the children and families going through the centre.

“After a year in any of our rooms you can see how strong they are in themselves,” Brabham says.

An analysis of the service, commissioned by the centre’s CEO Lisa Thorpe on its 10th anniversary, highlighted that Bubup Wilam had positively contributed to 13 of the 17 Closing the Gap targets that impact on the life outcomes of Aboriginal and Torres Strait Islander people.

The Ernst & Young report also demonstrated that the centre delivered value for money with a cost-benefit higher than similar organisations and programs.

“If governments are truly looking to make change in Aboriginal people’s lives, they should be investing in successful evidence-based early years programs like Bubup Wilam. Their own reports show they are failing to meet their own targets; we are exceeding their targets,” says Thorpe.

“The question we all need to ask, what is the cost long-term if this proven model of care is not supported?”

The office of the minister for Aboriginal Affairs in Victoria was contacted for comment.