For French fishermen it’s not just livelihoods at stake, but culture and history too

A group of scientists and doctors have written to the Prime Minister urging him not to opt for a second lockdown and to stop presenting Covid-19 as a mortal danger.

Thirty-two top academics have called on Boris Johnson and his scientific and medical advisers to avoid a knee-jerk reaction to rising cases and hospitalisations.

Calling for decision-makers to ‘step back’ and think carefully about what to do next, the researchers said there had not yet been any ‘readily observable pattern’ between tight social distancing rules and the numbers of people dying of coronavirus.

The open letter was written by Oxford’s Professor Sunetra Gupta and Professor Carl Heneghan, by the University of Buckingham’s Professor Karol Sikora, and by Sam Williams, director of the consultancy firm Economic Insight.

The Prime Minister is expected to hold a public briefing again tomorrow when he is set to lay out tougher social distancing measures for the whole of England. 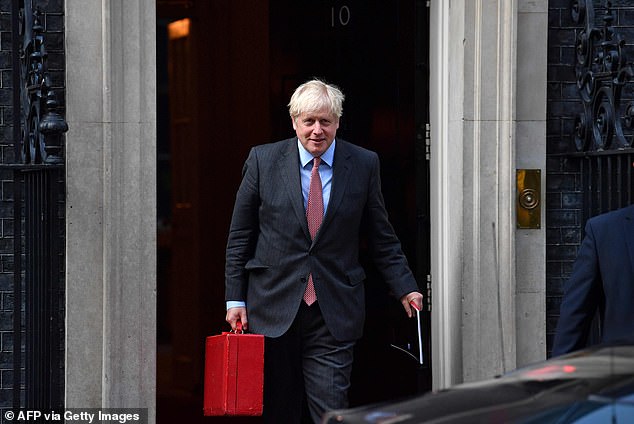 Boris Johnson is expected to hold a public briefing tomorrow when he is likely to lay out tougher social distancing rules for the entire country (Pictured: The PM leaving Downing Street)

He told MailOnline: ‘The worst case scenario is a lockdown – like a two week “circuit break”. The problem is that wouldn’t be two weeks – it can’t be. As soon as you’re out of the lockdown you’re back to square one.

‘We have adapted, people are going back to a rudimental social life, back to work and travelling on trains and buses. You can’t tell people to go back to “stay at home, save lives”; it’s not feasible.

WHO SIGNED THE LETTER?

‘I think the only options are imposing rules like the rule of six, or say no visiting people socially, like in April.

‘We put the letter together on Friday. The idea is just to reconsider – don’t rush into anything.

‘It’s important we take things seriously, but what worries me is they will rush into a two-week lockdown… it does not move us forward.’

The letter accuses the Government of not having a clear strategy for living with Covid-19.

It said no policies will make sense, or work long-term, if officials are not certain about what they want to achieve by doing them.

They appreciated that the initial lockdown was framed by the need to ‘flatten the curve’ – to bring the out-of-control outbreak back under wraps.

But they said: ‘For some time, however, there has been an absence of a similarly clearly articulated objective’.

And the Government must focus not only on Covid-19 but on the impact that lockdown measures have as a whole, because these could be just as important. There must be a limit, they said, to the sacrifices that can be made to slow the virus.

The letter said measures should be focused on protecting vulnerable people rather than everybody.

Elderly people and those with serious medical conditions are most at risk, the researchers said, and policies could be tailored to protect them better.

‘Our view is that the existing policy path is inconsistent with the known risk-profile and should be reconsidered,’ they said.

‘The unstated objective currently appears to be one of suppression of the virus, until such a time that a vaccine can be deployed.

‘This objective is increasing unfeasible… and is leading to significant harm across all age groups, which likely offsets any benefits.

‘Instead, more targeted measures that protect the most vulnerable from Covid, whilst not adversely impacting those not at risk, are more supportable.

‘Given the high proportion of Covid deaths in care homes, these should be a priority. Such targeted measures should be explored as a matter of urgency, as the logical cornerstone of our future strategy.’ 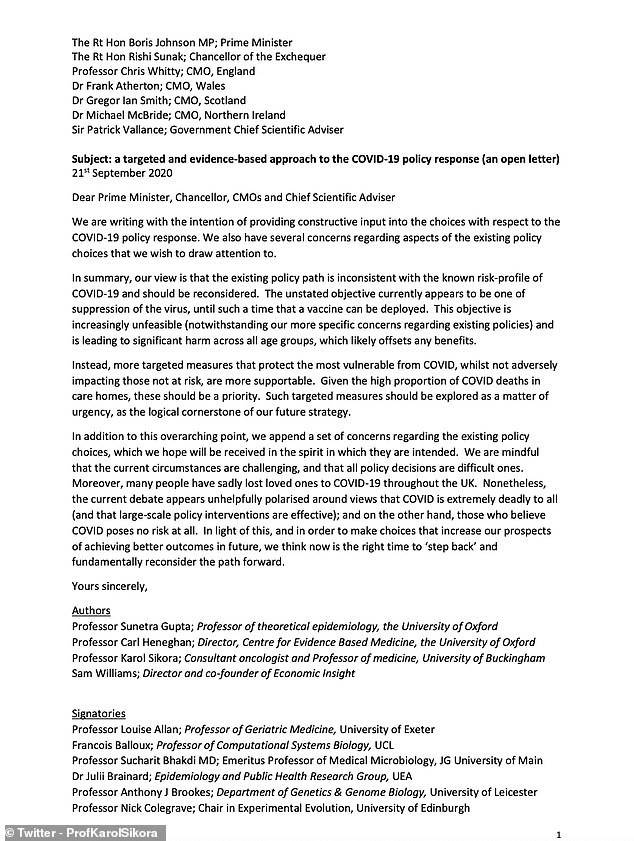 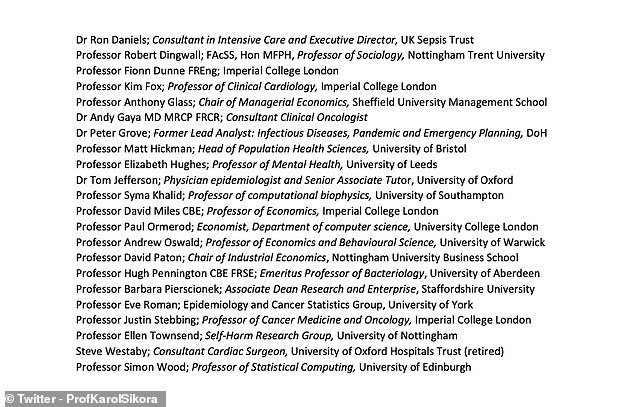 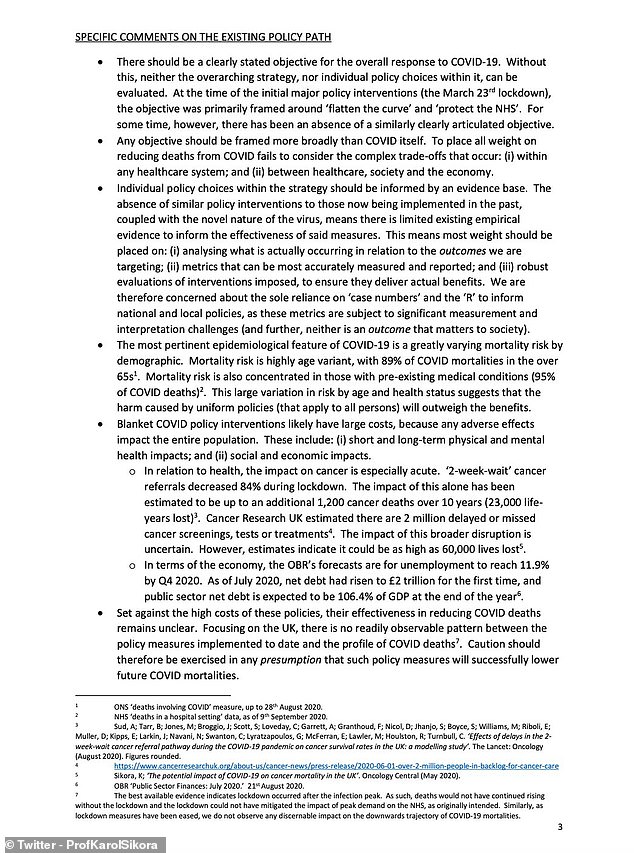 New rules to try and slow the spread of the coronavirus in England are expected to be announced tomorrow by Boris Johnson, but will not be welcomed.

The PM faces a mounting Tory rebellion tonight over plans to retighten the lockdown screw on hard-pressed Britons – including a curfew for pubs – amid serious questions over the figures used to justify new restrictions on freedom.

The Prime Minister will convene an emergency Cobra committee meeting tomorrow before revealing his new lockdown plans to MPs.

It comes after the Government’s two top scientists warned there will be more than 200 deaths a day by November if the UK fails to slow the spread of coronavirus.

His plans are believed to include a new 10pm curfew for the nation’s drinking holes, but the plans faced a furious pushback from MPs.

It came as Britain’s coronavirus alert level was raised to four tonight, meaning meaning transmission of the virus is ‘high or rising exponentially’.

But there was also criticism of the country’s top scientists, with questions being asked over their doomsday scenario picture of the next few months.

Chief Scientific Adviser Sir Patrick Vallance warned this morning that without action there will be 50,000 new daily cases of coronavirus by the middle of October.

And Chief Medical Officer Professor Chris Whitty said the UK has ‘in a bad sense literally turned a corner’ with rising rates of infection and that the nation needs to view the fight against the virus as a ‘six month problem’ before science eventually can ‘ride to our rescue’.

Professor David Paton, an industrial economist at the University of Nottingham, also hit out at the 50,000 per day prediction.

He pointed out on Twitter that France and Spain, to which the UK was compared, are seeing cases double every three weeks, not every one, which he said would put Britain at more like 7,000 to 8,000 per day by mid-October.

He told MailOnline: ‘It seems a very strange scenario to present, it’s not, as far as I can tell, based on any particular modelling.

‘If you look at the past few days, cases have been going down rather than going up, doesn’t seem to be any basis to select this doubling ‘every seven days’.

‘It [also] seems odd, to me, to choose to compare against France and Spain. There are other countries they could have looked at, where cases have been doubling every three weeks. Nobody knows what will happen to cases in the UK.

‘Do they really think we’ll have five to six times more cases than France?’

Senior Conservative MPs warned this afternoon that the UK ‘clearly cannot afford a full lockdown like we had in March’ and argued that the case for further national measures has not yet been made.

The PM was urged to remember we ‘live in a democracy not a dictatorship’ during a debate in the Commons this afternoon.

Celebrities
The season 25 star of 'The Bachelor' opens up that he might 'have critical conversations' with his final rose recipient...
Lifestyle
‘Got your hat!,’ Jake Paul gleefully exclaimed as he stole Floyd Mayweather’s hat at a press conference. The resulting fight...
TV & Movies
Brandon Thomas Lee was one of the few new faces added to "The Hills" reboot when it debuted on MTV...
World News
ST. LOUIS -- A man who killed his 10-month-old son, ex-girlfriend and her mother in 2012 was spared the death...
Beauty
Brunettes have hit the jackpot when it comes to choosing makeup colors — many different pigments and hues can look...
Fashion
LONDON — Antwerp’s ModeMuseum, MoMu, is gearing up for a big September reopening and preparing to feed the appetites of the...
Recent Posts